[Links checked 15 November 2017 and a few were found to be broken, due to removal of material from websites or simply the passage of time. Honest History may be able to help users track down resources where a link is broken. Please contact admin@honesthistory.net.au. HH]

Minister Robert turns the first sod of the Monash Interpretive Centre and defends its cost against critics, including Honest History. The Minister’s view on cost drivers differs from that of a senior official of his department.

Evidence on both sides of an alleged incident where Mustafa Kemal (later Ataturk) surrendered to an Australian colonel in Syria, 1918. More from Honest History’s associate, Cengiz Ozakinci, in Ankara.

Minister Robert has announced the award of a construction contract (to a French company) for the Monash interpretive centre in France. The weekend was the centenary of the evacuation from Gallipoli and the occasion was marked during the regular Australian War Memorial Last Post ceremony.

This post records that former Minister Senator Michael Ronaldson is leaving the Senate. We found notable his views on blood sacrifice by children and his arithmetic. Also, there is to be a new head of the Office of Australian War Graves.

An analysis of the Mid-Year Economic and Fiscal Outlook (MYEFO) efficiencies affecting areas of interest to Honest History. The egregious Monash museum project at Villers-Bretonneux (cost $100 million) has not been touched (though it is rumoured to be under question) and the Australian War Memorial has not been subjected to an additional 0.5 per cent efficiency dividend, unlike other national cultural institutions.

Update 14 December 2015: where are all the war books this Anzac centenary Christmas?

A note on Fairfax media’s roundup of the 2015 reading lists of 36 Australian writers. They recommend around 150 books between them and only two of the books mentioned touch tangentially on war. No Anzackery, no Anzac. Don’t these people know there is a war commemoration on?

Has the Anzac centenary industry hit its highest point? Have we reached ‘peak Anzac’? As early as August, the Lone Pine commemoration fell a bit flat (see Update 1 September) and there were signs that the then minister was turning his attention to the commemoration of the Vietnam War. The term ‘commemoration fatigue’ was starting to be uttered. Since then, the new prime minister has seemed to lack the infatuation with military matters that characterised his predecessor. 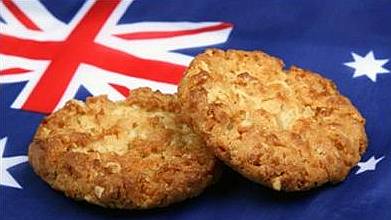 Anzac biscuits. The illustration is from Anzac.com, a website owned by OTTI Travel, based in Kusadasi, Turkey. The backdrop illustration on Anzac.com is of the Roll of Honour at the Australian War Memorial, complete with poppies. Honest History has asked the Department of Veterans’ Affairs how this website stands in relation to Australian regulations protecting the use of the word ‘Anzac’.

Recent seminars in Brisbane, Hobart and Canberra have adopted a questioning tone. The long-awaited and recently released book World War One: a History in 100 Stories turns the familiar tools of emotion and sentiment against the received and simplistic ‘birth of a nation, Anzac spirit’ view of the war. Meanwhile, greedy commercial interests seeking golden eggs have badly wounded the Anzac goose.

Looking ahead, colleagues canvassing Australian government Great War commemorative intentions for 2016 have gained the impression that, Fromelles and Pozieres in July aside, the agenda is fairly much bare. Fromelles itself (frequently billed as ‘the worst 24 hours in Australian history’) is a pretty grim episode which lacks the nationalistic marketing appeal of Gallipoli. (Peter FitzSimons’ Fromelles & Pozieres seems to lack much of the tub-thumping jingoism of its predecessor Gallipoli; the Fitzkrieg, rightly, has lost some momentum.)

Then there is Vietnam. By hanging official Vietnam War commemoration off the 50th anniversary of the Battle of Long Tan, just a month after the centenary of Fromelles, the government may risk an extreme case of midwinter community jading. The prominence being given to Long Tan is puzzling, given its relatively small contribution to overall Australian casualties in the war. Perhaps focusing on one battle will avoid re-opening wider issues; there has already been enough misrepresentation and half-truth about Australia’s Vietnam.

The Long Tan commemoration and other non-Great War events are officially part of the commemoration of the ‘century of service’ by Australia’s defence forces. In some ways this milestone is more deserving of recognition than the narrower Anzac centenary: in every ‘war or warlike operation’, time after time, it is defence personnel who cop it and carry the load, even as politicians and other urgers burble about ‘Anzac values’ and ‘martial tradition’. But the centenary is more showy; it is hard to see mass community enthusiasm being generated by events like the 25th anniversary of the end of the First Gulf War, the 50th anniversary of the end of Indonesian Confrontation, and the 25th anniversary of the arrival of 1RAR Task Group in Somalia, all being commemorated in 2016-18, although each of these events would be of significance to those who were involved in them. (The current list of dates is much shorter than the original ambit claim in the report of the National Commission on the Commemoration of the Anzac Centenary in 2011, which had more than 100 potential commemorative dates for the years 2016-18.)

Will the ‘magic’ then last for three more years? To date, the Turnbull Government has persisted with the dubious Abbott legacy of the Villers-Bretonneux boondoggle, the whizzo Monash interpretive centre. If that project continues it will open on Anzac Day 2018, with the event possibly heralded by a virtual artillery bombardment or some other triumph of ‘immersive’ technology. The question will be whether anyone other than European schoolchildren will be impressed. Those Australians who in December 2015 are already over Anzackery, or are just bemused by the frequency of ‘Lest We Forget’ moments, may well be hoping it will be ‘easy from now on’. Their ancestors a century ago felt similar emotions. 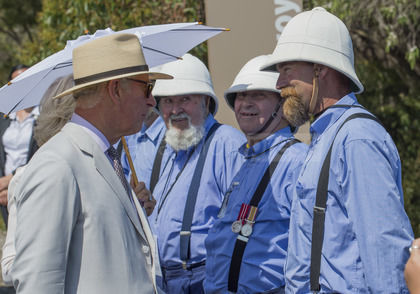 The Prince of Wales and Soldiers of the Queen, National Anzac Centre, Albany (Atlantico Press)

‘Ka-ching!’ at home in the West

There is one corner of this wide brown, El Niño-anticipating land that seems totally sold on the centenary, and that is Albany, WA. Honest History’s correspondent in the south-west has sent us the Albany Advertiser from 29 October, which records the following:

And all of this without counting the Prince and Princess of Wales, passing through on 14 November, who presumably got free entry to the Centre, but may well have bought a souvenir or two (discreet royal Ka-ching!) Of course, declining regional towns are entitled to make a buck but the lines between commemoration and commercialism seem very blurry around King George Sound.

Albany has also seen a torrent of muddled history and over-claiming about whether and when the town was the site of the first dawn service in Australia. Claims have been made and repeated (in local tourist brochures and on the website of the National Anzac Centre) that this service happened in 1930 at the summit of Mount Clarence but there is as little evidence for this as there is for the assertion, also on the Centre’s website, that the famous ‘Ataturk words’ commencing ‘Those heroes …’ were uttered at a dawn service at Gallipoli in 1934. Recent research in Perth has found evidence of dawn services around about 1930 in Albany, Collie, Northam and Roebourne, and that’s just in WA. The Australian War Memorial punts fairly firmly for 1928 in Sydney as the first organised dawn service.

We have written separately about the issues facing Stuart Robert MP under his triple burdens of Minister for Human Service, Minister for Veterans’ Affairs and Minister Assisting the Prime Minister for the Centenary of Anzac. (We also wrote a polite welcoming letter – see Update 13 October – to the Minister, offering to meet to discuss issues of mutual interest but, so far, not a sausage by way of reply or even acknowledgement from his staff, to whom we also sent greetings.)

The future of the Veterans’ Affairs portfolio itself may be clouded, which in turn has implications for public servants. The portfolio has for a long time been ‘the (relatively) Little Engine that Could‘. The Australian War Memorial’s director, Brendan Nelson, has been the highly effective engine driver, with the Department of Veterans’ Affairs manning the guard’s van. (In the original story, the engine seems to run itself, with no discernible driver.) 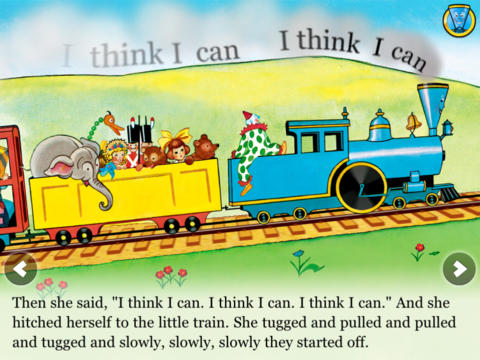 In our related piece, we speculate about how long this situation can continue: there are straws in the wind in relation to both the centenary of Anzac function and the broader future of the portfolio. Among other questions, to which portfolio shed do the War Memorial engine and its passengers (300 staff) trundle if DVA becomes an Office within the Department of Human Services or a handful of divisions scattered across two or three departments in South Canberra, Woden and Tuggeranong? (Note for dwellers ‘beyond the beltway’, these are districts of the national capital which house departments delivering health and social services.) Veterans’ Affairs portfolio officers in Anzac Parade (War Memorial) and Constitution Avenue (new home of DVA) will be watching their new minister closely.