Victorian Senator Michael Ronaldson is to resign from Parliament. The former Minister for Veterans’ Affairs and Minister Assisting the Prime Minister for the Centenary of Anzac (and Special Minister of State) announced his intentions today.

Honest History wishes Michael Ronaldson well in the future. He had some trouble with the arithmetic in his portfolio and had a particular obsession about the responsibility of children to make blood sacrifices in war as a way of remembrance. He may have been sincere on the second but his spruiking helped ensure that a distorted view of our past and future persisted as a threat to the health of future Australians.

Honest History would have liked to have met Michael Ronaldson but this did not happen. We look forward to a more fruitful relationship with his successor, Stuart Robert MP. We think that if a Minister believes in his arguments he should be prepared to debate them with those who have a different perspective. 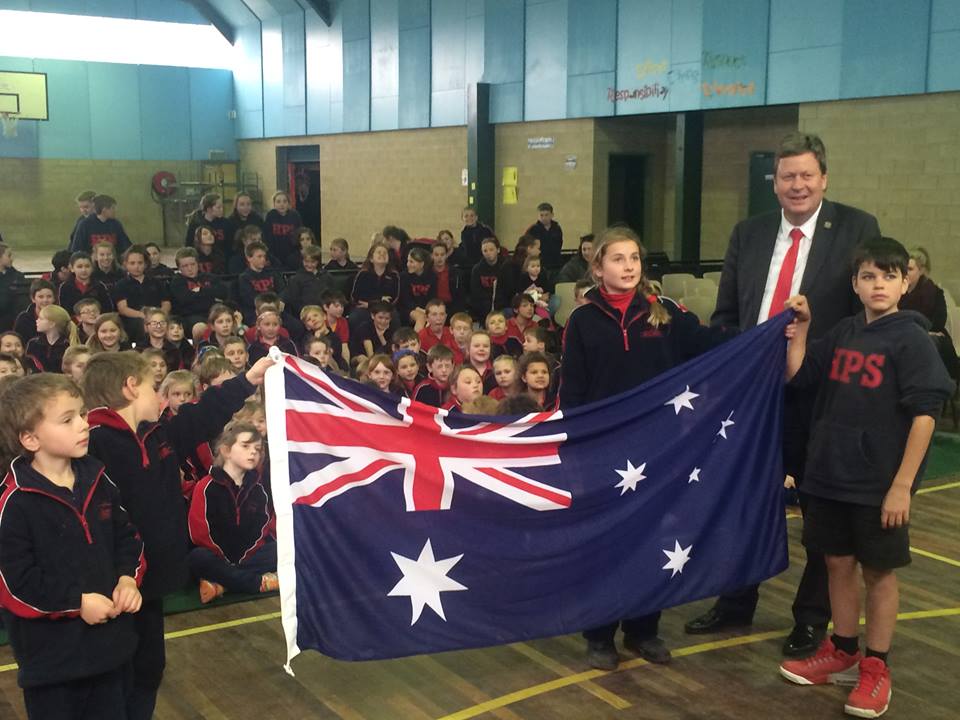 Then Minister Ronaldson, August 2015, with students of Haddon Primary School who ‘skipped, walked or ran 14,765kms … – the distance from Melbourne to Gallipoli – as part of their program to educate students about the Centenary of Sacrifice’. They won an award. (Facebook/Senator Ronaldson)

In other news from Vets’ Affairs today, Minister Robert has announced the appointment of Colonel Ken Corke (ret’d) to head the Office of Australian War Graves within DVA. Colonel Corke replaces Brigadier Chris Appleton (ret’d) who has apparently retired again. Honest History wishes Brigadier Appleton well in the future; he provided helpful advice to us during the year.

Incidentally, it is worth noticing that the ministerial press release thanked Brigadier Appleton for ‘leading the development of the business case’ for the whizzo* $100 million Monash Interpretive Centre at Villers-Bretonneux – in which he played an important role, to judge by his answers in the Public Works Committee hearing. As we said earlier this week, we understand there is some disquiet in Canberra about the Monash boondoggle** and there is no indication in the Minister’s release that a completed Monash centre is to be part of Brigadier Appleton’s legacy. On the other hand, we see that the new man, Colonel Corke, has a background in project management and procurement. Watch this space.

* ‘Whizzo’: this is an archaic adjective meaning ‘excellent’ but we use it as a short-hand term to cover the ten or so adjectives used by DVA in spruiking the Monash project to the Public Works Committee. The adjective ‘immersive’ appeared 14 times in DVA’s 20 page submission to the PWC.

** ‘Boondoggle‘: ‘a project that is considered a useless waste of both time and money, yet is often continued due to extraneous policy or political motivations’.

Boondoggle money. Sir John Monash on the Australian hundred dollar note. It will take a million of these to build the whizzo Monash Interpretive Centre.