Click here for all items related to: Australia’s war history

What are the central elements of Australia’s involvement with war and how do we continually reinforce them? While Australians’ relationship with the Anzac tradition or myth is a key theme of the Honest History project we will be gathering materials that show how the same issues have arisen with all of our wars.

Explore our articles and references under the theme headings: 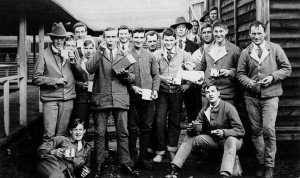 There are the trials of governing in wartime (Day, John Curtin Prime Ministerial Library), the losses of individuals (McMullin), the irrational fear (Stanley), the straitened circumstances on the home front (McKernan), the isolated lives of prisoners of war (Hearder) and the intense adjustments of the after war years (Crotty and Larsson, Garton). There have been in each war the official efforts to chronicle events (Australian War Memorial) and to commemorate them (Australian War Memorial). Private observers have rarely been neutral and have been subject to official pressure or non-cooperation (Brissenden, Campbell, Gerster).

The material here overlaps considerably with the resources under the heading Anzac analysed, since Anzac is the biggest single component of our military history, a symbol and talisman for politicians (Hawke, Howard, Rudd, Gillard, Abbott, Reynolds, though ambivalently for Keating twenty years on) as much as for soldiers (Inglis, Masters). Yet this history goes back much further than 1915 (Stockings and Connor), has been mythologised (Stockings, Stockings) and its strength is likely to be reinforced by the commemorative activities of the next few years (Cahill). To give some context to those commemorations, here is a reference which shows that Australian deaths in war in the twentieth century amounted to just 0.04 per cent of total (civilian and military) deaths in war in that time.