Discovering the discovery of gold (review of Wilkie)

Generations of Australian school children are familiar from their history text books with the story of the discovery of gold in Australia. The intrepid Edward Hammond Hargraves, returning to Australia from the Californian goldfields, uses the knowledge he has acquired there to find gold in New South Wales, precipitating a gold rush which rejuvenates the colony’s finances and boosts its population as prospective diggers flood in.

Douglas Wilkie sets out to do a number of things in this book. Foremost, he wishes to set the record straight on the type of man that Hargraves was and, by implication, to chastise earlier writers who had merely repeated the work of their predecessors without attempting to verify the sources on which they relied. The author also tells the story of Alexandre Duchene, a transported convict made good who, by Wilkie’s telling, has a better claim than Hargraves to be the first ‘discoverer’ of gold. In pursuing these objectives Wilkie seeks ‘to give substance to the names of people whose paths crossed those of Duchene and Hargraves’. Underpinning all of this is an immense amount of archival research in government papers, court documents, shipping manifests, newspapers and journals, as the author tries to nail down his characters and the events of their lives. The voluminous footnotes attest to the effort.

The Hargraves that emerges from Wilkie’s narrative is an unattractive figure, a bit of a chancer, a ne’er-do-well who sponged off family, friends and acquaintances but never made a real go of anything. Grazier, timber-getter, publican, auctioneer, wharfinger, shipping agent, and gold miner, Hargraves tried them all from the 1830s through to his apotheosis in 1851. Wilkie shows that many of the claims Hargraves made for himself in later life don’t stand scrutiny; publicans and auctioneers had to be licensed, for example and no licence was ever issued to him. It seems more likely that Hargraves acted as an agent for others and inflated his role in their ventures once a certain notoriety attached to his name. Wilkie suggests that Hargraves’ objective throughout his life was to achieve wealth without too much effort on his own part.

Whence Duchene? He was transported to Van Diemens Land in 1836, convicted and sentenced to 14 years for receiving stolen goods as part of a criminal gang in London. A jeweller by trade, Duchene was assigned in the colony to jeweller James Barclay, gained a reputation as a reliable and honest worker and obtained his ticket-of-leave in 1841.

Establishing his own businesses in Launceston, Duchene thrived and the sources suggest that he gained some standing in the community. Towards the end of the decade, like many Van Diemonians he moved with his wife and young son to Port Phillip. Up to this moment the Hargraves/Duchene parallel is little more than a study in contrast: on the one hand the ex-convict thrives by his own efforts, overcoming the burden of his background to make a success of his life and gain the respect of his peers while the free-born settler tries and fails to get rich by the minimum of effort.

In Melbourne in late 1848 Duchene, with a number of others, met Thomas Chapman, a shepherd from a station in the Pyrenees ranges, northwest of Melbourne, past Ballarat. Chapman had come to town with a significant quantity of gold-bearing ore. Chapman was ‘persuaded to take the three men … to the site of his discovery’. The group explored the area where the gold had been found and satisfied themselves that it was a payable find. Duchene seemed to have decided that his best option was to report the find to the government and claim a reward. The government was not prepared to have a gold rush in the colony; it successfully shut down the nascent gold fever and Duchene received nothing. (Wilkie tells the story in an earlier book, The Rush that Never Started.) Duchene, disappointed, moved briefly to Sydney with his family and then took ship to California in April 1849.

Duchene’s life now becomes the stuff of melodrama. Apparently, he made some money in California as a prospector but was conned by a business partner. Duchene tried unsuccessfully to rebuild his fortunes, his wife ran off with another man, and he died of cholera in December 1850; his abandoned seven-year-old son was found wandering the streets of San Francisco on a freezing winter’s night.

Hargraves, who also went to California later in 1849, had no success on the goldfields and returned to Australia at the beginning of 1851, claiming to friends to have a plan to find gold in New South Wales, get a reward from the government and perhaps gain employment as well. Other minerals were already being extracted in the region and it seems to have been well-known that small quantities of gold were to be found on properties west of the Blue Mountains.

Wilkie establishes that Hargraves was familiar with a number of land-holders and others in the region and it could be seen as testimony to his opportunism or acumen that he pursued that course. Hargraves’ scheme paid off and led to a source of gold for others. He took the credit for the find himself, ensured that it was well-publicised so that a gold rush started, and obtained a reward and employment from the government. He then dined out for the rest of his days on his reputation as the discoverer of gold in Australia, continually pressuring successive governments for rewards and pensions and inflating his role, knowledge and accomplishments.

Wilkie provides plenty of contemporary comment to demonstrate that Hargraves was widely disliked; he was greedy, rude, presumptuous and lacking in the practical knowledge to actually discover gold for himself. Wilkie’s detailed research certainly achieves his principal objective of providing as detailed a description of Hargraves’ life and character as we are likely to get.

Wilkie is less successful, however, in his pursuit of wider goals. The introduction of Duchene to the story serves to establish that payable quantities of gold had been discovered in Australia well before Hargraves made his claim. But to go any further and imply that Hargraves may have appropriated Duchene’s idea requires more solid evidence than Wilkie can produce. There is no evidence that the two ever met.

To imply some sort of link or influence one on the other, Wilkie relies on the pair being in California at the same time, the free sharing of information and experience on the Californian gold-fields, and the similarity between Duchene’s attempt to capitalise on the Pyrenees find and Hargraves’ successful exploitation of the gold found in New South Wales.

The link is at best tenuous. Given that minerals found in the colonies belonged to the Crown and that prospecting was a high-risk occupation, getting some sort of reward and/or a government job or pension may have seemed a more certain way of profiting from a find than actually trying to mine it oneself. Wilkie does not examine whether this might have been a common approach to benefitting from mineral and other discoveries, rather than a cunning plan devised by Duchene. 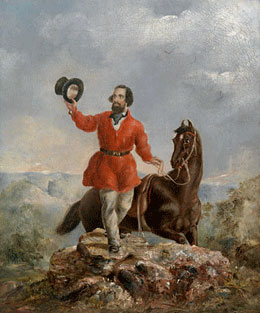 Hargraves may have been an unpleasant character and Duchene in his own way admirable but, in practice, they tried to do exactly the same thing: appropriate the work of others in finding gold to their own advantage. Duchene’s redemption and untimely demise may attract our respect and sympathy but, as for exploiting the discovery of gold, we can say little more than that Hargraves succeeded, perhaps with fortunate timing, where Duchene failed.

In pursuit of his other objective of giving substance to the people who passed through, or indeed close to, the lives of Hargraves and Duchene, the author introduces a vast cast of characters, many interesting in their own way but often peripheral or irrelevant to the core narrative. The comings and goings of these folk do convey something of the striving and vulnerability of colonial life: individuals rise and fall and rise again, tragedies are overcome, new schemes for wealth, security and respectability are pursued.

My favourite character of this ilk is Jones the Newport Chartist: facing death by hanging, drawing and quartering as a traitor in 1839 his sentence was commuted to transportation for life, where his good behaviour earned him appointment as a Constable of the Guard and a recommendation for a ticket-of-leave in 1843. Jones, a watchmaker by trade, went to work for Duchene in Launceston in 1845, received a conditional pardon in 1847, and lived out his life as a successful watchmaker in Launceston, earning a harrumph from Manning Clark that he and his fellows ‘left not a trace that they had been members of a society to promote the dignity of man’.

More generally, there is the remarkable mobility of people at a time when travel was neither easy nor safe. Wilkie’s characters moved extensively between and within the colonies; they travelled to New Zealand, England and California. Social mobility matched the physical. It would be interesting, for example, to know more about attitudes to bankruptcy and insolvency; people are regularly sold up as insolvent and yet reappear in a new venture in short order.

By trying to do too many things Wilkie has produced a book that doesn’t quite work. There are simply too many characters whose entrances and exits add little to the narrative. The author’s habit of jumping between his main protagonists and back and forward in time doesn’t help. One has a sense of a writer who is loath to leave any of his research out; the reader is constantly being led down byways that turn into dead-ends.

As an example of this, we are told that the licensee of an inn in which Hargraves may have had an interest was, in 1842, one James Taylor. There then follows a digression on James Taylors, three of whom ‘may have been’ the man in question, although there is no evidence for any of them, and a fourth from the same general area who ‘drowned while intoxicated’ is added for good measure.

Wilkie acknowledges in his introduction that where gaps exist the ‘historian must make reasonable speculation based on the surrounding evidence’. Unfortunately, there are rather too many such speculations: phrases such as ‘We might wonder’, ‘We might easily imagine’, ‘dare we suggest’, ‘may well have had’ abound as do ‘probably’ and ‘perhaps’. The book would have benefitted from a more disciplined selection of material and a tighter narrative. 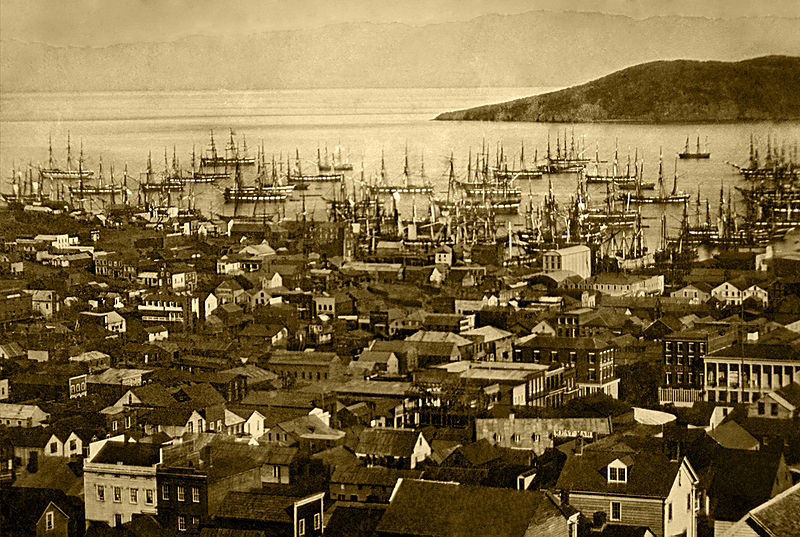 Wilkie has ensured, nevertheless, that future writers on this period will have no excuse for regurgitating the familiar Hargraves story. On the other hand, he might have made more of his command of his sources to consider what the lives of the main protagonists can tell us about colonial society. More generally, we might draw the lesson that attributing a ‘discovery’ to one person – whether it be Captain Cook and Australia or Charles Darwin and the theory of evolution or Hargraves and gold – is usually lazy and ahistorical.

* Derek Abbott is a retired parliamentary officer. He has previously reviewed books for Honest History on The Silk Roads, Victor Trumper, sport, Australian foreign policy, World War I at home, and other subjects.

One comment on “Discovering the discovery of gold (review of Wilkie)”