Update 25 April 2017: Sue Wareham in Pearls and Irritations on the War Memorial’s reliance on funding from arms manufacturers.

Update 15 April 2017: Canberra Airport is renowned already for its hosting of advertisements for arms manufacturers. The No Airport Arms Ads campaign against these advertisements now has a website.

The picture below is of a newish Australian War Memorial advertisement at Canberra Airport. There is one in both the Qantas and Virgin Australia arrival areas. The advertisement has a lovely picture of the Memorial at night, with the slogan, ‘for we are young and free’ and, bottom left, the words ‘proudly supported by Northrop Grumman’. 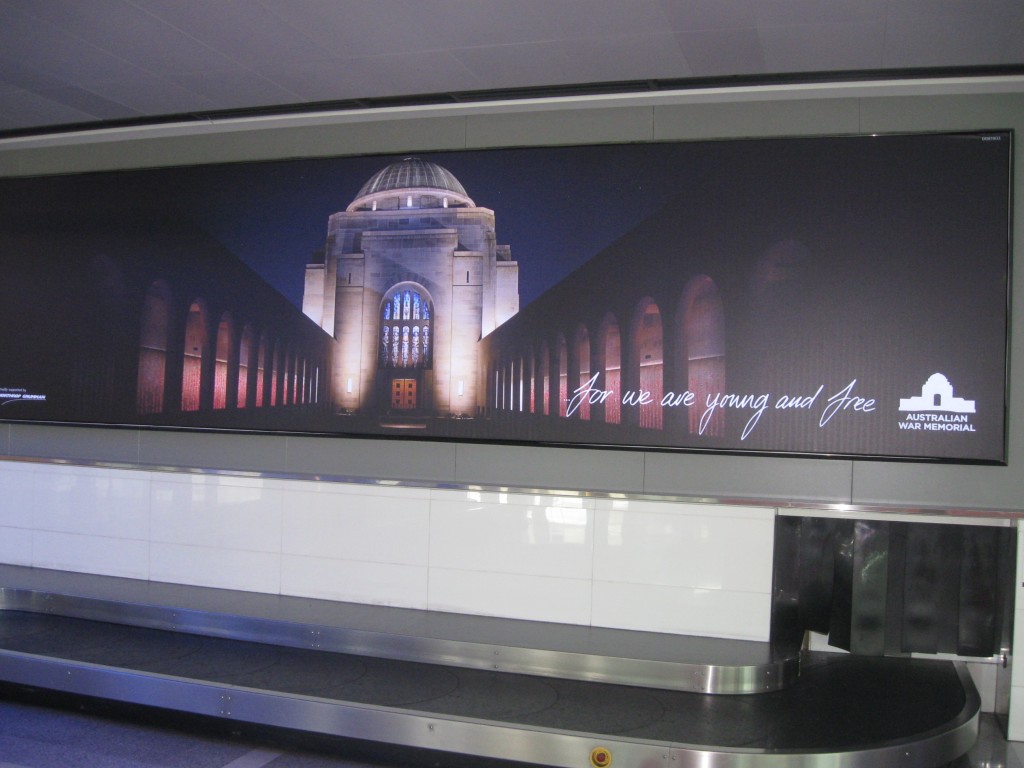 Should the National Anthem be used for advertising?

The advertisement and the new slogan raise at least three issues. First, should it be possible for words from the National Anthem to be appropriated for advertising? The use of the word ‘Anzac’ is strictly regulated. Most Australians expect the national flag to be respected. The words and music of the National Anthem are in the public domain, however, and there are no restrictions on their ‘non-commercial’ use. But should a cultural institution that promotes a narrow and debatable view of what is important in our country’s past, present and future be able to adopt a line of the National Anthem to encourage people to visit the Memorial – and to buy merchandise from the Memorial shop (someone makes a commercial buck from all that military history literature and memorabilia), and patronise the privately-run cafes at the Memorial?

Commandering the words of the National Anthem in this way tries to inextricably link the role of the Memorial, as determined by its management and Council, with the expression of the spirit of Australia. This is bizarre when the great majority of Australia’s population do not visit the Memorial and a good proportion of us are puzzled by or indifferent to the story it presents. Honest History has criticised the Memorial’s previous slogan – ‘Every nation has its story. This is ours’ – as narrow and fatuous. The Honest History Book presents an alternative view, providing evidence for the argument that Australia is more than Anzac – and always has been.

The new slogan at the Memorial is just as problematic as the old one. Both the old and new slogans are tendentious marketing, pure and simple, and should be treated as such. They have no more plausibility than the slogan used by an Australian ice cream company in days long ago: ‘Peters Ice Cream – the health food of a nation’. Like Peters’ attempt to co-opt Australian nationalism, the Memorial’s new piece of puffery should become a subject for parody and derision.

(There has been rather a long run-up to the new slogan and it has been launched without much fanfare. The War Memorial market tested the ‘young and free’ words in August last year. This was done through an online public opinion website, where people are paid small amounts to answer questions. The words, or paraphrases of them, appear in at least four major speeches by Brendan Nelson since he became director of the Memorial in late 2012.) 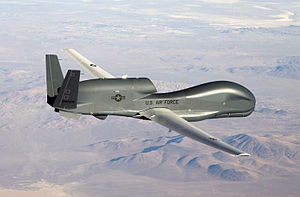 Dying for our freedom?

Secondly, there is the implication in the Memorial’s use of the words that the men and women commemorated at the Memorial died so that we could be and remain ‘free’. ‘They died for our freedom’ is, of course, one of the most common sets of commemorative words. Young visitors to the Memorial and to other commemorative institutions are encouraged to use such words in tributes. ‘We are very proud’, says the website of a Queensland primary school, ‘to have been given the opportunity to express our appreciation of the sacrifice of the ANZACS so that we can enjoy our Australian lifestyle and freedom’.

‘For righteousness and liberty’, claimed Director Nelson in 2015, ‘2 million Australian men and women serve – and have served this nation over more than a century’: liberty – freedom – the allegedly indispensable and indisputable objective of service – and death – in war. The author of the present note puts a different view in The Honest History Book:

Euphemisms and dishonest terminology are the essence of Anzackery. An honest approach would not say “they died for our freedom”, as if there was some direct link between squalid death a century or 70 years ago and such liberty as we have today or had then. An honest approach would simply say “they died serving a government policy” and then it would go on to question whether that policy made sense then or makes sense now. When we hear that mantra, “They died for our freedom”, it is usually a sign that someone is trying to stop us asking difficult questions about what they really died for.

Thirdly, the advertisement’s reference to proud support from Northrop Grumman raises again the important issue of whether war memorials should seek and accept support from arms manufacturers. Memorials and arms manufacturers certainly seem to enjoy a symbiotic relationship: the Australian War Memorial’s theatre has for years been called the BAE Systems Theatre and the world’s four largest arms companies (Lockheed Martin, Boeing, BAE Systems, and Raytheon) appear in the most recent list of major sponsors of the Memorial (Annual Report 2015-16, Appendix 9).

Northrop Grumman is the world’s fifth largest arms company by value of sales ($US 23 billion in 2015). Among other products, it makes military drones; the RAAF is currently acquiring seven Northrop Grumman Triton drones for offshore surveillance. Like most arms companies, Northrop Grumman is big on ‘corporate citizenship’, which presumably extends to supporting war memorials. Although the company does not yet appear in the Australian War Memorial’s large sponsors list it did famously hire the Memorial’s Anzac Hall in December 2014 for a Christmas party to raise its profile in Australia. (A media release from the company around this time pictures Director Nelson alongside the then American Ambassador, the then Australian defence minister, and the chief executive of Northrop Grumman Australia.) This beano led to questions at Senate Estimates after complaints from war veterans. Director Nelson defended the use of the Memorial’s facilities in this way, noting that corporate support enabled the Memorial to do important work. 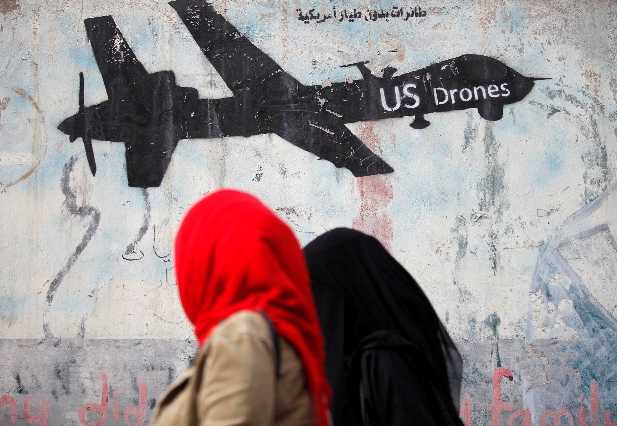