Orthodoxy at the top (review of Henry’s The Gatekeepers)

‘Orthodoxy at the top’ (review of Henry’s The Gatekeepers), Honest History, 26 April 2016

Examinations of the ‘culture’ of institutions, industries and sectors of society are much in evidence in Australia as public debate focuses on organised labour, the banking sector and indeed government itself. Do agencies or sectors develop cultures which lead their staff or members to internalise certain values and attitudes that define what is acceptable in outlook and practice? Adam Henry’s book is a detailed study of these questions as they apply to Australia’s foreign policy in the Menzies years, both in its content and administration.

Anti-communism and fear of the expanding influence of the Soviet Union and Mao’s China were at the core of the foreign policy of the Menzies Government. Henry refers repeatedly to the ‘anti-communist orthodoxy’ with the implication that it was somehow misguided or itself subversive: ‘the extent to which the anti-communist orthodoxy infiltrated Department of External Affairs (DEA) practices and notions of diplomatic professionalism’ is a typical comment. Then, and more particularly later, this orthodoxy was denigrated by many on the left as mere scare tactics – ‘Reds under the bed’ – being used for domestic political purposes. There was no doubt an element of truth in this and yet we should not be dismissive of the reality of the threat posed by Soviet ambitions.

The brutal realities of Stalin’s regime, the subversion of post-war Eastern Europe, communist support for anti-colonial independence movements in Asia and Africa and the extensive and successful efforts at subversion in the West were well understood. The 1950s was after all the decade of the suppression of the East German and Hungarian uprisings, of Burgess, Maclean and Philby, of Petrov and of Khrushchev’s secret speech to the 20th Party Congress. Equally, the reality of the ‘threat from the north’ had been amply demonstrated in the then recent past.

Menzies had no time for the liberal internationalism of Evatt and his Departmental secretary, John Burton. There was no ‘third way’; either you supported the Anglo-American (increasingly the American) world-view or you were at the very least to be numbered with the ‘useful idiots’. Henry argues that, by fostering a culture across DEA, academia and the media that accepted this world-view, the range of policy responses was curtailed and that this did not serve Australia’s long-term interests.

The author sets out to show how Menzies, supported by his Ministers for External Affairs, particularly Richard Casey, and like-minded departmental heads shaped DEA through selection and recruitment into an agency that had an almost Manichaean world-view and a pragmatic approach to its work that allowed little room for alternative views or ethical niceties when dealing with Australia’s neighbours, or, indeed when promoting government policy.

This was complemented by the creation of the ‘Canberra Network’. Henry convincingly demonstrates the emergence of a network of DEA officials, academics, journalists and organisations, principally the Australian Institute of International Affairs (AIIA), drawing on British and American models and with some support from wealthy United States foundations.

DEA developed a sophisticated system of opinion management to create ‘independent’ voices supportive of government policy. There is no suggestion of a conspiracy in this, just the use of personal contact and privileged access to create a culture that accepted more or less uncritically the assumptions underlying the policy. It is difficult to avoid the implication that, in pursuit of career advancement, acceptance by the great and the good and access to funding, participants in the network were happy to produce research that ‘complemented dominant interpretations of the Cold War in Australia, the UK and particularly the US’. It would be unjust, though, if much valuable research on Asia and the Pacific that was being done by individuals and institutions that are identified as being part of the network were to be dismissed for that reason.

The author seeks to show the outcomes of this process through the career of a DEA officer whose service straddled the Evatt and Menzies eras and by considering the response of departmental officials to two major policy issues – the decision to join the American war in Vietnam and the anti-communist massacres in Indonesia in 1965. The career of W D Forsyth is summarised as one of drift and disillusion: his ‘liberalism and reflective analysis prevented him from being a true Cold Warrior’; ‘he was too catholic in his thinking to ever be a gatekeeper of official DEA ideas’. Those who did fill that role are exemplified by the officials, academics and journalists who framed ‘the narrow parameters of the national political discourse’ in line with the prevailing anti-communist orthodoxy.

With regard to Vietnam, Menzies’ misleading justification for military involvement and official collusion in it ‘could occur precisely because political considerations, professional associations, ideological obligations, and the anti-communist orthodoxy’ demanded it. On Indonesia, the Australian government and its diplomatic representatives on the ground are characterised as welcoming the opportunity that the coup and counter-coup in September 1965 presented to deal with the Indonesian Communist Party (PKI), although they were well aware that the PKI was not central to the events. Henry demonstrates that Australian diplomats assisted in promoting the belief that the original coup was an attempted communist take-over and that the subsequent extirpation of the PKI and its supporters was necessary for Indonesia’s stability.

The Australian ambassador, KCO (Mick) Shann, expressed little concern about the human cost. The British and Australian governments went further, reassuring the Indonesian military that, in the context of Konfrontasi, they would take no military action that might inhibit action against the PKI. For his management of the ‘anti-PKI and anti-Sukarno propaganda campaign’, Henry refers to Shann as the epitome of the DEA officer, ‘a straight thinking man’. 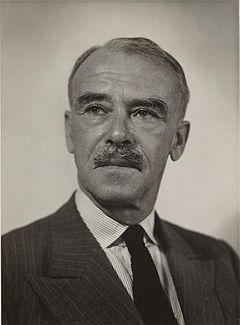 Casey, Minister from 1951 to 1960 and Arthur Tange, secretary of the Department from 1954 to 1965, dominate this period. Casey had had a glittering career both in Australia and Britain but he lacked political skills. He favoured diplomatic recognition of China and was an enthusiast for engagement with Asia; he recognised Britain’s declining power and opposed Australia’s support for Britsh actions over Suez in 1956 – but could not save Menzies from himself – while at the same time counselling against excessive dependence on the US. In none of these matters did he carry his ministerial colleagues with him. However, he avoided airing conflicting views in public and accepted that his and the Department’s job was to get on with implementing government policy.

Tange brought to the administration of DEA considerable intelligence and a commitment to ‘clear procedures, the chain of authority, obedience and efficiency’. Probably quite happily, he had to operate without his minister for extended periods and interpret and apply Casey’s disparate and general views in a way that gave direction and structure to Australia’s foreign policy and to the administration of the Department. DEA was expanding rapidly and the approach to recruitment is central to Henry’s thesis. The Department would seek to maintain its (self-awarded) ‘elite’ status within the public service with a selection process seeking both intellectual ability and the ‘right type of person’.

Casey assumed ‘that advancement came best … from nomination by seniors who rewarded courtesy, deference and industry’.  This would seem to be borne out by his approach to recruiting officers for DEA. While a good university degree was assumed, ‘personality, bearing and address [were] also of the greatest importance’. Discreet contacts were made with the heads of the better private schools and University departments seeking, in Henry’s phrase, ‘straight thinking men’. And they were overwhelmingly men: Jill Ker Conway was rejected as ‘intellectually aggressive and due to her attractiveness [likely] to be married in a year’. Another internal appointment was squashed with the comment that New York was ‘no place for the single female non-glamorous type’.

One has to be cautious in reading too much conscious building of a culture into the selection process. Casey as minister and, one suspects, by temperament, was not deeply engaged in departmental administration. Tange’s immediate concern, conversely, was efficient administration: he oversaw selection processes, warning against the ‘well-mannered dilettante’. 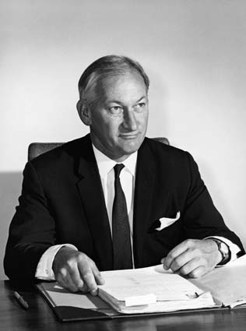 What the author describes as Tange’s ‘hidden criteria’ to be applied by selection committees are unexceptional. Of 189 Australian-educated recruits to DEA between 1943 and 1964, some 70 per cent were from ‘selective NSW-Victorian [presumably Sydney Boys, Melbourne High, etc.] and wealthy fee-paying independent secondary schools’. It would be interesting to know whether that proportion is very different from the general educational background of university graduates in those years. It is more likely that Tange’s personality, attitudes to the proper role of the Public Service and the approach to management mentioned above had more influence on departmental culture than the conscious creation of an ethos around a core policy outlook.

This period was one of rapid expansion in Australia’s foreign policy engagement, both in bilateral relations and involvement in multilateral organisations and issues. The anti-communist orthodoxy did not prevent Australia from trading with the Soviet Union and China throughout the period. It would be valuable to know whether the departmental approach to other issues was as narrowly constrained by Cold War attitudes as in Henry’s chosen examples.

Despite these reservations this is a stimulating examination of the process of building consensus around a particular world-view and its impact on policy. At the very least it should give us pause to reflect on institutional cultures, how they develop and how they might be changed.

* Derek Abbott is a retired Senate officer with a history degree from Aberdeen University and a long-standing interest in military history. He has reviewed books for Honest History on World War I, and again, the war at home, Serbia’s Great War and popular resistance in World War II and the future of Asia, as well as two books by John Tognolini.