Stephens, David: From the Honest History vault: 80 years since the Darwin bombing but context remains all-important

Tomorrow is 80 years since the first bombing of Darwin during World War II. Our commemoration cohort, led by the Darwin Military Museum and the RSL, will remind us of this event with appropriate services of remembrance. The initial bombing caused somewhere between 240 and 270 deaths, with 300-400 wounded. The bombing has had its own national commemoration day (19 February) since 2011.

Of course, all deaths in war are tragedies, but the Darwin event has always needed to be put in context and Honest History has tried to do this a number of times over the years. First, Darwin was a small story in Australia’s war – apart from the scare it sent up some Australian spines at the time as details became known – and in the overall conflict. Honest History has drawn attention to comparative figures for bombing deaths in World War II and here they are again:

Secondly, even close to Australia, there were far bigger things happening in World War II, particularly in Timor, which was about to endure harsh treatment by occupying Japanese forces. We in Australia knew little then – and have known little since – about that part of the war although some current initiatives, including a webinar this week, have tried to remedy that.

Notice about the webinar; You Tube material coming soon. Webinar organiser and contributor Sister Susan Connelly writes: ‘Commemorations of the bombing of Darwin would do well to pay careful attention to facts. Any threat felt in Australia all those years ago needs to be discussed with a clear view of what actually happened. Australia was not invaded by the Japanese, but Portuguese Timor was.’ And between 40 000 and 60 000 Timorese died.

Meanjin editor and ABC presenter, Jonathan Green’s 2014 remark about how Australians commemorate wars is not just relevant to the Darwin bombing but it applies here quite sharply. Green was provoked by how we – or some of us – treat the Great War battlefield of Pozières:

Thirdly, attention on Darwin flowing from events 80 years ago might cause us to focus also on the city’s status today: at once a base for United States Marines, and likely to become more so, and a cash cow for the Chinese business interests that own the Port of Darwin. Marx and Engels wrote about how history works itself out through contradictions; that Darwin situation would have appealed to them. 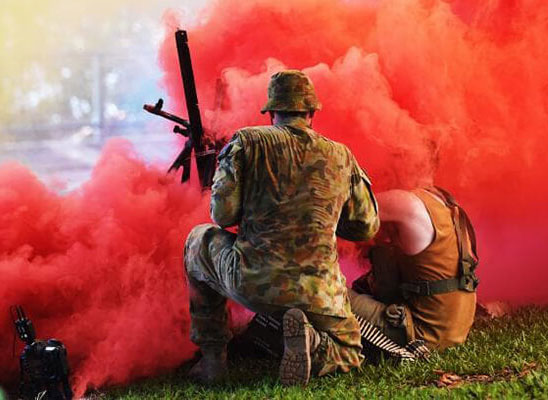 Finally, there is the way in which the Darwin bombing has been used to boost tourism to the Northern Territory. Honest History noticed this in 2013 when we picked up Alan Powell’s detailed analysis of booster efforts going back to 1982. In 2016, incomer teacher John Shield was whimsically astounded by the range of events the Top End put on (including a mouse flying a Spitfire). In 2019, there was a ‘Bombing of Darwin Tour Package’. among other events, with ‘storian Peter FitzSimons as urger-in-chief. In 2022, with tourism looking for a post-COVID boost, the Northern Territory government webpage on events marking the anniversary is headed ‘Community Celebrations’.

This year, again, there is a ‘Bombing of Darwin 80th Anniversary Tour Package’ and other attractions. We are told the bombing left ‘hundreds of servicemen and civilians dead, countless others injured … Imagine the chaos and feel the fear as you walk in the shoes of soldiers and civilians when bombs rained down during the first of 64 air raids on our city.’ Lest We Forget indeed, dial up the emotion, vague the facts up a bit, but let’s keep those dollars rolling in.

Peter Stanley talks to Geraldine Doogue on ABC RN Saturday Extra. For the complete Honest History coverage since 2013, search the vault using our Search engine with the term ‘Darwin’.