On the morning of 13 August 1940 a Hudson A16-97 aircraft flying from Melbourne to Canberra crashed on the eastern approaches to Canberra’s airport.

All ten people on board the aircraft were killed, including three cabinet ministers and the Chief of the General Staff. As well as the loss of members of the military, the deaths of three senior politicians led to significant instability in the government of Prime Minister RG Menzies.

In recent years, two major studies have been published on the impact of the 1940 air disaster: Air Disaster, Canberra: the Plane Crash that Destroyed a Government, by Andrew Tink (NewSouth Publishing, 2013) and Ten Journeys to Cameron’s Farm: an Australian Tragedy, by Cameron Hazlehurst (ANU Press, 2013 and 2015). The second of these titles is available both in print and as an e-press publication (downloadable without charge). See also from the A.C.T. Archives.

There is more in this 2018 article on the ABC website. And more in this 2020 Canberra Times article for the 80th anniversary. Comment from Cameron Hazlehurst. 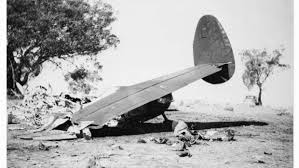