Twelve years ago, some Canberra citizens conceived the idea of building in the city new war memorials, one for World War I and one for World War II. They believed the city lacked such things, the Australian War Memorial being, they said, a memorial for the dead of all wars. The proponents, known as the Memorial(s) Development Committee (MDC), were well-meaning, they had support from both sides of federal politics, including Prime Minister Rudd, but they lacked basic awareness of the history of the War Memorial or an understanding of the Memorial’s significance.

Four years ago the MDC plan died, partly due to the proponents failing to raise even a small proportion of the money they needed to implement their grandiose plans and partly because of strenuous lobbying by a disparate group of Canberrans, working with officials at the National Capital Authority (NCA), and finally convincing a hitherto-dithering War Memorial Council that it needed to understand that it was under threat.

The original plan, World War I and World War II memorials on the shore of Lake Burley Griffin. Each memorial was to be as tall as a six-storey building. Later the proposed memorials were made shorter but a site was found for them much further up Anzac Parade towards the War Memorial (MDC)

The anti-memorials coalition, the Lake War Memorials Forum (the Forum) included peace activists, military historians, members of the Walter Burley Griffin Society, heritage bodies, community associations, the A.C.T. branch of the RSL, a lobbyist for members of the Australian Defence Force, a former Chief of the Defence Force, two former heads of the RAAF, other distinguished persons, and dozens of others from Canberra and beyond.

The crucial meeting of the War Memorial Council in 2012 had to confirm that the plans for the rival memorials were in conflict with its own charter. It did so, and that ruled the Memorials out, according to the NCA’s guidelines for such things – guidelines which previous NCA management had glossed over.

Beyond that, the details of the Forum’s campaign are relatively unimportant. Part of the story is in Peter Stanley’s chapter in the collection, Anzac’s Dirty Dozen, although that was written before the campaign had successfully concluded. (See also Stanley’s Eldershaw lecture from 2014, which also covers the beginnings of the Honest History coalition.) Other aspects emerge from media at the time, for example, in 2011 and 2012.

Because articles on the Honest History website have been critical of the Memorial’s priorities and governance structures does not mean the coalition lacks respect for the Memorial’s mission, properly conceived and followed – and extended to cover the context of our wars, the home front, the aftermath, the impact of war on other countries besides Australia, and a peaceful future. Nor does the coalition lack respect for the Memorial’s staff, as was made clear in the preface to Honest History’s Alternative Guide to the Australian War Memorial.

The Forum’s website has been archived but the attached document from it, a submission to the National Capital Authority dated May 2012, presents the Forum’s arguments. Two earlier submissions, to a parliamentary committee in 2011, are here (Submissions 27, 27.1). These three submissions alone amount to more than 45 000 words but they represent only part of the work done by the Forum. Each document has extensive references.

The paragraphs below (from the 2012 submission) counter the central argument of the proponents of the rival memorials – that the Australian War Memorial does not adequately commemorate the dead of the two World Wars, that, in fact, it ignores them:

The inappropriateness of the MDC’s “ignored” argument becomes obvious if one walks through the Australian War Memorial, the heart of the [War Memorial-Anzac Parade] precinct, and its grounds. This exercise destroys the claim that there is no memorial to the two world wars. The grounds contain around 150 plaques remembering individual units from the two wars, compared with a couple of dozen referring to other wars. Inside, there are thousands of diaries from both major wars. There are eight galleries portraying the World Wars. They are packed with visitors on any Anzac Day (or any day, for that matter) while the much smaller exhibits for other wars are relatively deserted.

Moving on, the wall above the Pool of Reflection and the Eternal Flame lists more than twenty theatres of World Wars I and II, from Gallipoli to Bougainville, the Somme to Borneo. Most of all, there is the Roll of Honour, with 102 000 names, 98 per cent from the two world wars, and the names are marked with thousands of poppies every day of the year.

A comment on the [NCA ‘Have Your Say’] site from David Stephens reinforces the point:

“”Anzac Day at sunrise; Remembrance Day at 11.00 am; many other days during the year for other ceremonies; particular days for particular individuals or battles, if it comes to that … all of them at the Australian War Memorial, under the names of 100 000 dead from those two wars, under carved names of battle fields from those wars, within sight of the unknown soldier from one of those wars, in grounds dotted with plaques from units which served in those wars, etc., in a building which the historical record shows was erected to commemorate the dead of those wars – and of all other wars.”

The outgoing Director of the Australian War Memorial [Steve Gower] has said this:

“It is unconvincing to try to justify two expensive new memorials on the premise that nowhere is there proper commemoration… The bulk of the people commemorated there [in the Australian War Memorial], a hundred thousand at least, relate to the losses suffered by Australia in both wars. My feeling is that it is not valid to say that they are not appropriately commemorated, they are not recognised.”

In summary, the Forum believes it is impossible to say these 101 000 souls are ignored in the Australian War Memorial-Anzac Parade precinct, given the Memorial’s overwhelming – and completely justifiable – emphasis on the two world wars. 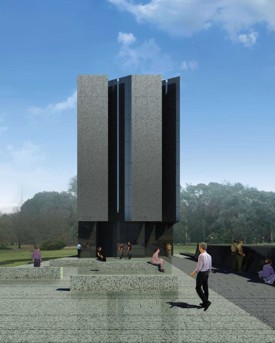