The Australian War Memorial was opened 75 years ago today.

The Australian War Memorial at Canberra, symbol of a young nation’s courage and sacrifice, was officially opened yesterday [began the report in the Canberra Times]. The impressive service of tribute to the deathless army which placed the seal on Australian nationhood came to its climax when the Governor-General (Lord Gowrie) closed a switch, and the great bronze doors of the memorial swung silently open.Thus, an ideal conceived on the battlefields of the Old World had been realised and the splendid monument of the Empire’s youngest capital became the property of the Australian people.

Among the 5000 people present were Prime Minister Curtin, General Sir Thomas Blamey and 18 recipients of the Victoria Cross. The Governor-General himself had been awarded the VC in 1899. The photograph below shows official cars waiting after the ceremony.

The anniversary will be mentioned in the script for the Remembrance Day National Ceremony today and over the next three months there will be a 75th anniversary exhibition in the Captain Reg Saunders Gallery and Reading Room. A related item on the 6oth anniversary. An ABC item on the 75th anniversary. Tom Sear in The Conversation on how digitisation makes it impossible to forget. (Do we not still have a choice to remember, though?) Louise Grayson’s photo essay in The Conversation juxtaposes scenes from the Western Front and Queensland – the latter bearing names from the war. 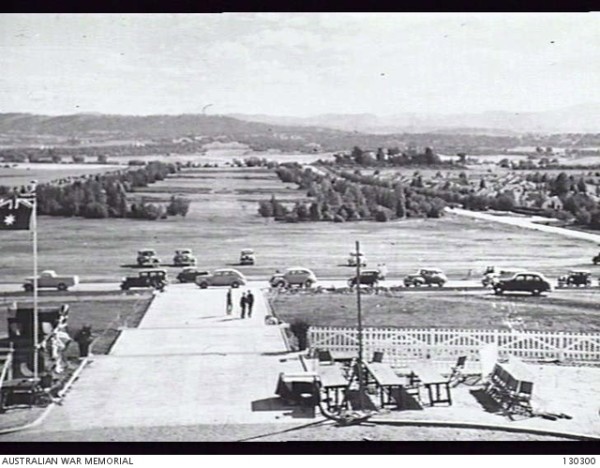