Brendan Nelson shamefully described the Australian War Memorial as holding the soul of Australia. Julia Gillard said Gallipoli defined us as a nation. With the government spending millions on Anzac Day hoopla, perhaps it is time for a reality check. Tragically, the true lesson of Anzac Day has not been learned.

The twentieth century began well for the newly federated nation. Backed by a reasonably enlightened constitution (if you were white), Australia led the world in such things as universal suffrage, aged pensions, minimum wages and innovative design and development. The exhibition at the National Museum of Australia, Glorious Days: Australia 1913, showed what an exciting world it was, especially for the better off.

Then a pointless and avoidable war started in Europe and a generation of young Australian men were sent off to be slaughtered on the other side of the world. Dragged into Churchill’s fantasy about ‘knocking Turkey out of the War’, we invaded a country which had never heard of us – seemingly oblivious to the well-armed and well-trained army waiting for us on the cliff tops above. Is this really how we want to be ‘defined’ – belligerent and stupid? 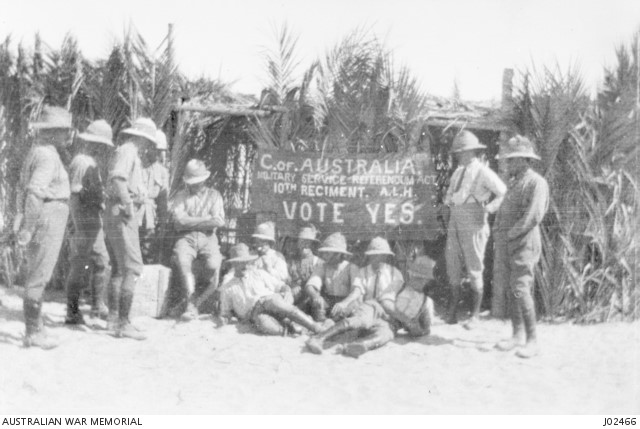 Our first bellicose Prime Minister (but, alas, not our last), Billy Hughes, wanted yet more cannon fodder and tried to win two conscription referenda. With all the patriotic propaganda around, he thought the ‘Yes’ vote would be a shoo-in but, just to be sure, he allowed the troops at the front a vote. Big mistake: while there is no authoritative figure for how front-line troops voted, a sizable minority of all troops voted against conscription in both 1916 and 1917. That, combined with the suffering wives, sweethearts and mothers, ensured the referenda were defeated, the second by a larger majority than the first.

There was economic upheaval as production was diverted to the war effort. The cost of living rose, riots broke out, there were allegations of profiteering and inequality of sacrifice, and police baton charges against unionists and others. Some observers felt the country was on the brink of civil war. The trade union movement was greatly strengthened.

The end of the appalling war saw an equally appalling peace, based on the Treaty of Versailles. Billy Hughes used the blood of 60 000 Australian dead to strut around at the Peace Conference. As Chairman of the Imperial Reparations Committee, Hughes played no small part in imposing the vindictive and impossible reparations on defeated Germany, which led, not too indirectly, to World War II. As a result of Hughes’ manoeuvrings we also acquired New Guinea, for which we are still paying a price in more ways than one. 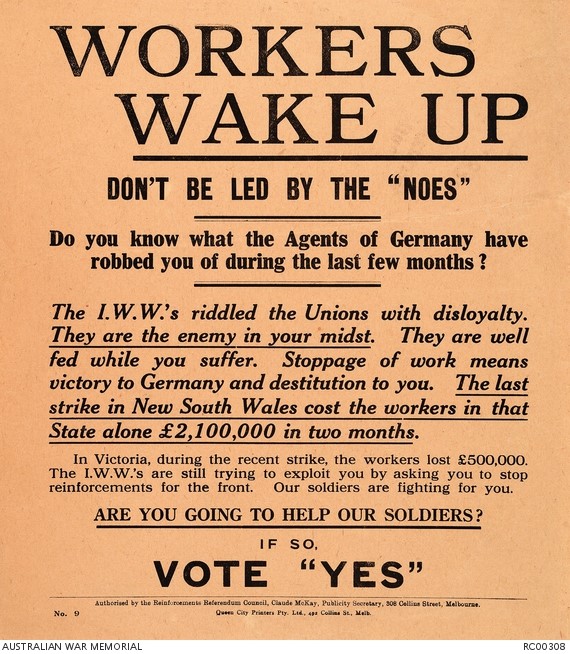 The end of the ‘The War to End War’ saw a nation numbed and bereft. There was hardly a family that did not have or know of a man lost, either dead, or wounded, or blind, or mentally traumatised, often taking refuge in alcohol. War memorials in nearly every town in the land bear silent testimony to the pain and the grief, and the guilt. ‘They shall not grow old, as we that are left grow old …’

Post-war Australia remained divided for years [says Joan Beaumont in Broken Nation] into the camps the war had spawned: a broken nation in which the volunteer was pitted against the “shirker”; the conscriptionist against the anti-conscriptionist; and, though sectarianism was not created by the war, the Catholic against the Protestant.

We are told that we celebrate Anzac Day to ‘honour the fallen’. The best way to have honoured the fallen would have been to ensure that there were no more fallen. With one notable, even noble, exception, we have fought numerous wars from Sudan to Iraq (Mark III), firstly for the British Empire (of which we once thought we were a part), and then for American hegemony.

It is beyond my understanding why we venerate the disastrous folly of Gallipoli, while Kokoda is greatly undervalued – Kokoda, where our brave soldiers fought in terrible jungle conditions, with the remarkable support of local people, on the one occasion in our history when we believed (with good cause) that we were under direct threat of invasion. At least the men of Kokoda knew what they were fighting for! 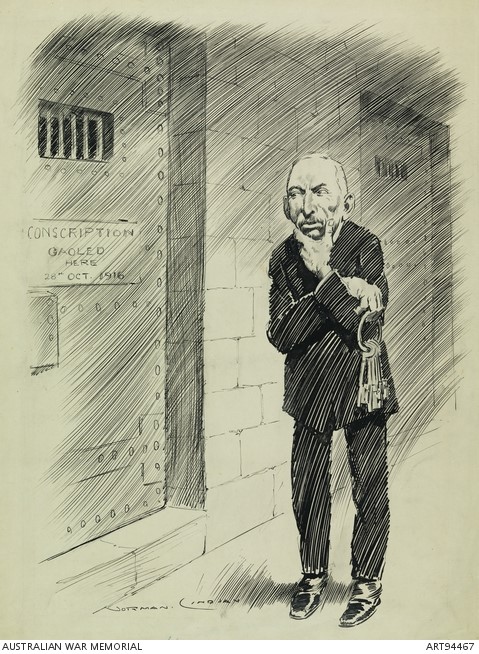 And now we have another desperate prime minister who kicks the khaki can, tries to ramp up fear in the populace and exhorts us to rally round the flag(s). He spends millions sending planes off to bomb the Middle East and yet more young men to fight and possibly die in yet another futile foreign war, even though he himself said that, in the Middle East, it was a case of ‘baddies versus baddies’. As Dr Samuel Johnson famously asserted, ‘Patriotism is the last refuge of a scoundrel’.

* Richard Keys spent a lifetime in the filming business, covering everything from newsreels to animation, ultimately retiring as ‘curator emeritus’ at the National Film and Sound Archive. Through his work he developed an abiding interest in history, which was boosted by the war diaries of his father, who served in Salonika. An earlier version of this article appeared on the website of Civil Liberties Australia.