Note: this post should be read in conjunction with our series on the $50m cost blowout under the previous government. And with this post on later developments, as disclosed in the October Budget.

The Australian Department of Finance has all sorts of rules and guidelines for how departments and agencies handle taxpayers’ money when those departments and agencies have acquired it through Australian Budget processes. One set of rules is Capital budget planning and reporting: Capital management plans, and it says this: ‘The capital management plan (CMP) is a strategic planning document that details an entity’s actual and anticipated capital expenditure, and how the entity proposes to fund it’. 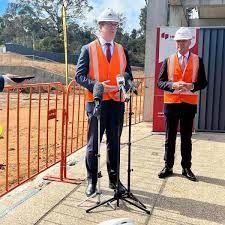 There are provisions for when a CMP must be revised, including when there are ‘significant changes’ such as those following ‘government decisions or measures’ or ‘the restructuring of an entity’s expenditure due to emerging priorities’. It occurred to us that the Memorial’s receipt of an extra $50m project funding – received in the Morrison March Budget but kept secret till July – would have met the ‘significant changes’ criterion, so we made a Freedom of Information request on 9 September as below:

The Memorial’s Corporate Plan 2022-2026 at page 19 says this: ‘Capital Management Plan: Outlining the Memorial’s capital investment across a range of assets over a five-year period’.

The Department of Finance rules on Capital budget planning and reporting set out when a Capital Management Plan (CMP) must be revised, including requirements to provide DoF with a revised CMP when significant changes occur.

We thought that this request might at least establish whether the Memorial had complied with the requirement to revise its CMP after the $50m boost. All we got from the Memorial, however, was a two-line Schedule of Documents refusing access to two documents described as ‘Capital Management Plan 2021-22’ and ‘Capital Management Plan 2022-23’. Both inaccessible documents had six pages.

Access was refused under the Freedom of Information Act 1982 sub-section 47E(d) which says, ‘A document is conditionally exempt if its disclosure under this Act would, or could reasonably be expected to, do any of the following: … (d) have a substantial adverse effect on the proper and efficient conduct of the operations of an agency’. Then there is a Note: ‘Access must generally be given to a conditionally exempt document unless it would be contrary to the public interest (see section 11A)’.

So, we were particularly interested in how the Memorial parsed 47E(d) and how it dealt with the public interest test. ‘Section 47E(d) provides’, the Memorial said, ‘that documents containing operations of an agency are conditionally exempt if disclosure would, or could reasonably be expected to, unreasonably affect the proper and efficient conduct of the operations of the agency’. Not quite what the Act says, but close enough. ‘The application of this provision is subject’, the Memorial goes on, ‘to the consideration of the public interest factors outlined in Section 11B of the FOI Act’.

The next five paras of the Memorial’s response are so dense that, to preserve the narrative flow of this post, we have consigned them to an Appendix. This is the knobbly bit, though, from para 13, preserving its tortured and tangled prose:

The 2 documents found are referenced as ‘internal budget plans’ which present possibilities of change in due course and this can have detrimental effect on how the Memorial carries out its operations in the future shall the information be disclosed. The disclosure of this information has a predicted effect on the Memorial’s ‘proper and efficient’ operations as the information presents possibilities of change with proposed future activities and operations due to be undertaken in the coming years.

‘Possibilities of change.’ Minister Keogh, the man who has been sweating on whether the Memorial might ask for more money for its big build, might want to note those words. ‘Hear, Read, Mark, Learn and Inwardly Digest’ as Archbishop Thomas Cranmer said all those years ago. He was burnt at the stake not long after.

We cannot tell from all of this whether the Memorial drew up and lodged a revised plan explicitly to take account of the $50m boost (and to abide by the Finance rules) or whether the 2022-23 plan was about to be lodged anyway and was conveniently able to mention the $50m. We don’t know either whether the 2022-23 plan says anything about the cost increases which allegedly justified the boost in funding or whether it treats the $50m as an ambit claim just in case costs should rise in future, as ‘changes’ occur, perhaps including unforeseen project elements (like the approximately $10m geothermal heating project recently announced).

We make the comment that plans comprising just six pages – a lot of it in tables (Appendix 4) – have the air of ‘once-over lightly; box ticked’ but it is difficult to be sure about this on the information we have been given – or not given. Perhaps six pages once a year is all that the Department of Finance expects.

11. I have not considered any factors deemed to be irrelevant to determining whether access would be in the public interest, as specified in section 11B(4) of the FOI Act.

In order to assess whether release of the conditionally exempt material would be contrary to the public interest, I have considered the following factors which favour disclosure:

12. It can be noted that the release of this information will inform debate on a matter of public importance. The Memorial is currently undertaking a Development Project and its ongoing status is considered in the public interest.

13. In comparison considering the public interest factors against disclosure of the conditionally exempt material, the disclosure of the documents could consequently have a detrimental impact on the Memorial’s current and future operations. The 2 documents found are referenced as ‘internal budget plans’ which present possibilities of change in due course and this can have detrimental effect on how the Memorial carries out its operations in the future shall the information be disclosed. The disclosure of this information has a predicted effect on the Memorial’s ‘proper and efficient’ operations as the information presents  possibilities of change with proposed future activities and operations due to be undertaken in the coming years.

14. Taking the above into consideration, I consider that, on balance, the public interest factors against disclosure outweigh the factors for disclosure. Therefore, I am satisfied for the above reasons that it would be contrary to the public interest to withhold the information identified as conditionally exempt under section 47E(d) of the FOI Act.

*David Stephens is editor of the Honest History website and has been convener of the Heritage Guardians community campaign, opposed to the War Memorial project.

One comment on “Stephens, David: War Memorial fails to come clean on Capital Management Plan for its $548m big build: digest this, Minister!”