Update 24 April 2019: Turkish nationals are to be excluded from Australian ceremonies at Gallipoli, 2019. Security reasons cited.

Şehitler is the Turkish word for heroes and it is an apt title for this 90-minute documentary from Turkish film-maker Köken Ergun, made between 2016 and 2018, but with a particularly forensic eye on Anzac Day 2017 in the sunny Dardanelles. (Trailer.) Şehitler also translates as ‘martyrs’, and this would have served just as well for an English title, as that word pops up many times during the film, perhaps even more often than ‘heroes’ does. Even the 24 year-old New Zealand woman interviewed early on uses the former word and also the word ‘gods’. As a child, she was taught that the Anzacs were like gods, though she is happy to admit they were also invaders. And, she says, maybe stupid rather than brave, to let themselves be sent to fight other people’s wars. And then land in the wrong place. (That likely furphy can possibly be blamed on battlefield guides.)

From a trailer for the film, Rotterdam International Film Festival, 2019 (YouTube)

The film commences with the call to prayer and young male Turkish visitors to the peninsula doing ritual washing at a bank of taps. Then we pan around groups of youths ready to start off on Day 2 of their visit – which includes a re-enactment of the march of the Ottoman 57th Regiment to Chunuk Bair – while the Anzac pilgrims are having their service near the beach. These young Turks are casual, almost flippant about the visit, some of them feigning blasé. A younger contingent, filmed marching along in their shirts emblazoned in Turkish ‘Grandpa, I am here’ and chanting ‘God is greatest’ are more into the pilgrimage spirit.

There is a theme for the Turks, though – and it is brought out in a couple of impassioned speeches by tour guides – that Turks need to pay more attention to their history, particularly to a time when they drove out the invaders. After all, they are told, these Australians and New Zealanders today have come from the other side of the world to spend a short time at Gallipoli; some of them have been saving since their childhood to get here. Australians venerate, one guide says; we Turks should do better! It is a little ironic that Anzac pilgrims are being held up as models, particularly given the ones we spend time with in the movie are mostly young Contiki tourists, fairly undemonstrative, and led by a barely competent Australian guide.

And there is another contrast also. For the Turks, the subject is the ‘Çanakkale War’, which has two parts, the maritime skirmish in March and the prolonged slog of the Gallipoli campaign from April to December. For the Anzac-Contiki crew, however, the focus is just the land war, the beach, Chunuk Bair, Lone Pine, Simpson’s grave, and lots of other tombstones. In the second half of the film, we see a lot of the maritime side, with re-enactments played to appreciative audiences, and there is hardly an identifiable non-Turkish face amid the head-scarved, conservatively dressed, sometimes teary, audience.

Those alleged Atatürk words (‘Those heroes that shed their blood …’) get a run early on, without direct acknowledgement of authorship – the young Kiwi woman mentions words ‘by the Turkish president’ and how moving they were – but including the no difference between Johnnies and Mehmets words that were invented in Brisbane in the late 1970s, but are now accepted as part of the official, diplomatically approved English translation. (Summary of Honest History research in this area.) The emotional stops are well worked, too, in the re-enactments near the Çanakkale Martyrs’ Memorial, as Elif says goodbye to Hamza on his way to the front.

The film also has kids playing in trenches at The Nek, apps, guides over-egging invader-Turkish ceasefire fraternisation, a re-enacting Turk rescuing an Anzac when his own men would not (thus proving that Turks were human and humane, not inhuman and with tails, as the Turkish guides today claim the Anzacs then had been told), the classic panorama from Gaba Tepe to the beach, Turkish children marching past Anzac memorials and commenting, ‘They are names of their martyrs, I guess’, the story of Corporal Seyit hefting the shell to the gun that took out a British ship while all around lay dead, head-scarved matrons with cameras on mobile phones and selfie-sticks taking lots of photographs, and a Turk from Izmir interviewed, insisting that ‘without faith, this war would not have been won’. Allah was there for Corporal Seyit, too, but maybe not for Elif’s Hamza. Perhaps Allah blessed the merchandise in the museum shop, too.

There is less sweetness and light today than in that fabled brief ceasefire more than a century ago. As the Anzac Contiki contingent visits Lone Pine, we hear someone watching say in Turkish, ‘We should not let them come here’. We then see people queueing within the Lone Pine Memorial to sign the visitors’ book, the pen running out of ink a metaphor perhaps for cock-ups a century ago. 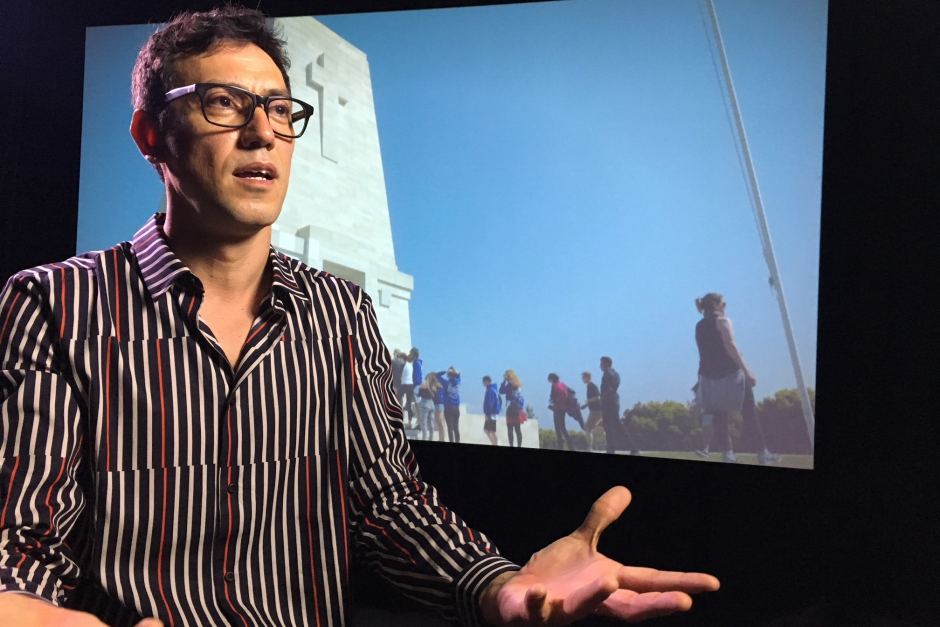 There is much more of this visitors’ book under the film’s credits, page after page in fact, with the Turkish entries helpfully translated. And it is very interesting for the contrast. Most of the Anglophone entries are standard commemoration speak (‘Lest We Forget’, ‘They shall not grow old’, ‘Thank you for all you did’), suggesting that those Turkish guides were on the money about how Australians and New Zealanders are well schooled in veneration. On the other hand, the Turkish entries are much more robust: ‘You came here but your return was disastrous’; ‘You are in my country now, behave!’; ‘Don’t ever think of invading us again’; ‘You can’t go around half naked among martyrs, have some respect!’; ‘May God curse those who attack us’; ‘F**king infidels!’

Twenty-first century Turks are forthrightly xenophobic, it seems, to judge by these comments. This may be what Turkish President Erdoğan has been working towards in encouraging battlefield tourism. It also suggests his recent remarks about the Christchurch massacre and victimisation of Muslims would have resonated with the younger people in his audience. In any case, those blasé young Turks at the beginning of Ergun’s film seem to have changed their tune by the end.

Heroes ends with the New Zealand Navy Band playing ‘Singin’ in the Rain’ in bright sunshine next to the Portaloos. In a movie which mostly plays it straight this coda could be a tongue-in-cheek metaphor for something or just a nice way to finish the show. Either way it works well. The whole film is very much recommended.

Note: The film was made with $25 000 and ‘free rein’ from the Australian War Memorial, is now owned by the Memorial and will be shown there at some future date. That was the position in 2018 and it remains the position now, unless the Memorial provides us with an update. Numerous emails, phone messages and phone conversations with the Memorial over more than three weeks could not elicit an answer to what seemed to us a simple question. If anything does turn up, we’ll print it without amendment as a comment to this piece. The film is mentioned on the Memorial’s website. The ABC’s Ewen Morgan Grahame interviews Ergun, including on why the Memorial seems reluctant to air the doco. HH

* David Stephens is editor of the Honest History website and co-editor of The Honest History Book. For analysis of the Islamisation of Çanakkale-Gallipoli, Ruth Pollard in 2013 and Turkish academic Ayhan Aktar more recently. And this by Aktar and Brad West. Another review of the film: Lauren Carroll Harris on the Rundog blog. And another review from Toronto by José Teodoro.

Print This
Click here for all items related to: Anzac analysed, Australia's war history, Expressing ourselves