Crown Street Women’s Hospital was deeply immersed in the life of inner-city Sydney for nearly 90 years. The hospital closed its doors on 31 March 1983 and, according to local historians, the last baby born there was its 273 569th.

Judith Godden, an academic historian with an extensive background of healthcare and social welfare research, has written a comprehensive history of the hospital. She is not the first author to recognise its special character: Ruth Park, for example, wrote in her memoirs about giving birth at Crown Street[1] and vividly recreated the hospital’s working class neighbourhood in her novels The Harp in the South and Poor Man’s Orange.

It is remarkable that such a detailed hospital history should be written many years after the hospital’s closure. Given that so many of the principal figures in Crown Street’s history are now dead, the book is testament to Dr Godden’s skill and persistence in finding so many of the hospital’s staff and patients to tell their stories. As well, it is fortunate that the final Board of Directors at Crown Street ensured that a significant proportion of the hospital’s records would be lodged with the appropriate archival body, State Records NSW.

The Mitchell Library at the NSW State Library also holds significant institutional and personal papers about the hospital. Dr Godden has mined all of this material exhaustively and the book includes many photographs that enhance the overall picture of the hospital.

While this is an institutional history, it is noteworthy that it has not been principally funded by an academic body or official organisation. Compare the Crown Street history with Janet McCalman’s prize-winning history of the Royal Women’s Hospital, Melbourne.[2] The Melbourne history, wider in scope than Judith Godden’s work, was funded from an Australian Research Council Fellowship, together with a large research grant within the University of Melbourne. Some of the funding for the Crown Street history came from the NSW Department of Health but the project was otherwise supported by private donations.

Crown Street Women’s Hospital was founded to respond to the needs of the rapidly increasing population of Sydney in the latter part of the 19th century. In the years 1881 to 1901,  the population of the city increased from 221 000 to 482 000. In the 1890s increased numbers of impoverished women gave birth in the Benevolent Society’s lying-in hospital for destitute women. This hospital was overcrowded and insanitary and in 1893 a number of women died from puerperal disease. As a result, a new Women’s Hospital and Dispensary opened on 16 October 1893 in the Haymarket area of inner Sydney. It remained there until 1896 and a year later the hospital leased a new building ‘City View’, at the intersection of Albion and Crown Streets, Surry Hills, that was to be the location of the Crown Street Hospital.

In the new hospital’s first decade the majority of patients attended as outpatients. For instance, in the year 1896-97 there were 733 outpatients and 59 inpatients, with 140 obstetric (childbirth) and 652 gynaecological (women’s health). Remarkably, in 1897 only 558 of 12 009 registered births in Sydney were in public hospitals. Of these 558 births, 80 per cent of the mothers were unmarried.

Over the years, the demands on Crown Street Hospital grew rapidly. Most of the patients came from the neighbouring Surry Hills, which was notorious for its poverty, with rats, fleas, defective sanitation and uncollected garbage. Early in the 20th century the NSW Government became a major source of funding for all public hospitals and after 1910 the newly elected Labor Government decreed that public hospitals should admit patients based on medical need, not as a charitable service.

One important development for medical staff at Crown Street came in 1904 when the University of Sydney officially recognised the hospital as one of its training hospitals. The physical expansion of the City View site was important with the opening of an Albion Street extension in 1910. With medical staff there were an increasing number of specialisations with appointment (in order from 1899) of a skin specialist, ophthalmic surgeon, bacteriologist, honorary anaesthetist, and honorary dentist.

With obstetrics as a key element of Crown Street’s services, the contribution of midwives was an important part of the hospital’s history. When Crown Street first opened, midwives could practise without formal training but one of the early aims of the hospital was to train midwives and by 1911 it had trained 459 of them. Midwives became leaders, too. Hannah McLeod (1857-1912), appointed from 1893, was the first matron. Edna Shaw (1891-1974) was another of the hospital’s matrons who made a significant contribution. In the words of the history: ‘Edna Shaw was not just Matron of Crown Street during 1937-52; she was its public face.’[3]

One significant chapter in Crown Street’s history was its program to combat eclampsia, a dangerous disorder of late pregnancy that in the mid-20th century was still resulting in serious illness and the death of mothers. Dr Thomas Dixon Hughes, chair of Crown Street’s Honorary Medical Board, began a drive against eclampsia at the hospital. This program was built around increased antenatal care for the hospital’s booked public patients, requiring regular visits by patients that involved measurement of weight and blood pressure, and dietary advice. 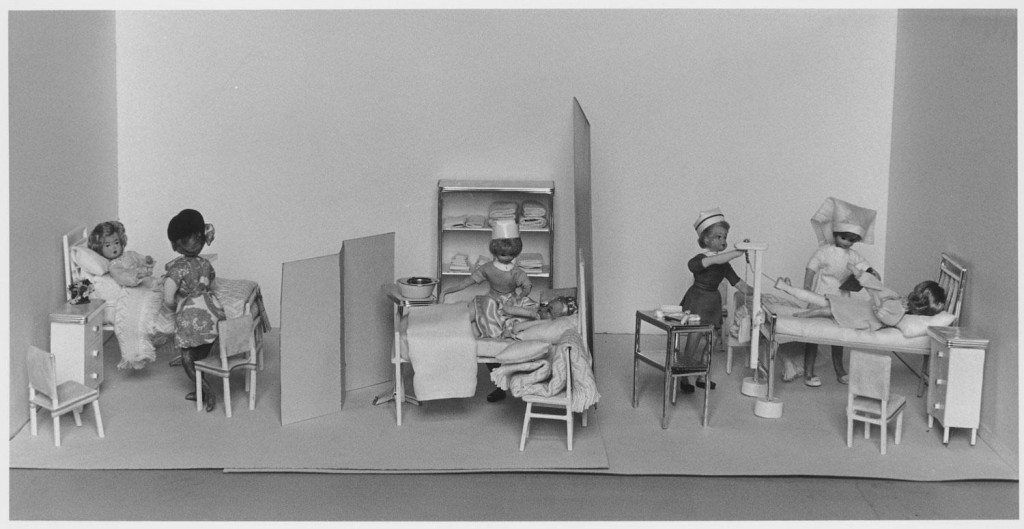 The eclampsia program proved to be remarkably successful with a significant decline in maternal mortality. The hospital’s Medical Superintendent, Dr Reg Hamlin, had been appointed to supervise the trial and some years later Hamlin published results from the trial without consulting Dixon Hughes who took offence and prevented Hamlin’s re-appointment as an honorary medical officer at Crown Street.

Reg Hamlin and his wife, Dr Catherine Hamlin, who had also worked at Crown Street, were forced to leave Australia and they moved to Ethiopia where they undertook pioneering work treating women and girls with vaginal fistulas. Catherine Hamlin has contributed the foreword for the Crown Street history and she wrote of the hospital’s importance as a training centre and of her pleasure at living and working there.

Probably the most graphic and thought-provoking section of the book is the chapter on adoptions, covering the period 1952 to 1973. Crown Street’s policy arose out of the post-war belief that adoption was the best policy for children of single mothers. While the chapter could only touch on adoption practices that generally applied in Australia and NSW, it describes the experiences of disempowered young women or girls who were often deprived of choices on the outcome of their pregnancy. Other single mothers waiting to give birth were treated with insensitivity and intrusion.[4]

Ironically with adoptions, some of the most powerless mothers were more successful at keeping their babies. Most Aboriginal women refused to allow their babies to be adopted and hospital officials found it hard to find adoptive parents for Aboriginal babies.

Another dark episode was the discovery of the impact of thalidomide on mothers who had taken the drug to control nausea during pregnancy. Dr William McBride had worked at Crown Street from the early 1950s and was Medical Superintendent from 1955 to 1957. In 1963 he reported on a pattern of severe abnormalities with a number of babies born at Crown Street. Eventually thalidomide was identified as the common factor in babies born with deformities. It was estimated that 20 thalidomide-affected babies were born in Sydney with 14 at Crown Street.

The period 1964 to 1973, Crown Street’s penultimate decade, was a period of significant social change and financial stringencies. There were expectations of an expansion at the hospital’s City View site but these plans did not come to fruition. There were also considerable fluctuations in patient numbers. At the same time, there were notable developments in obstetric practice (such as the purchase of ultrasound equipment in 1971) that were important for diagnosing multiple births and identifying obstetric abnormalities. The year 1970-71 broke all records with 7113 births, a record for any hospital in NSW, but these birth numbers gradually declined and, by 1981-82, the year before Crown Street’s closure, the number had declined to 4038 births.

The final decade at Crown Street was one of radical change. The election of the Whitlam Labor Government, and the introduction of universal healthcare with the passage of Medibank legislation in 1975, led to significant changes in hospital management practices and the demise of the honorary system. At Crown Street, there was a new emphasis on improving women’s experience of birth. The Birth Centre was opened in 1979 with the aim of providing a facility for mothers to give birth in a more natural setting. 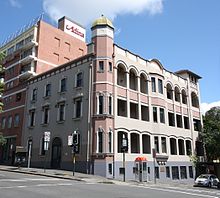 Judith Godden identifies the election of the Wran Labor Government in NSW as the starting point for the campaign to close Crown Street. The government was determined to open more hospital beds in Sydney’s western suburbs. There was a huge strain on the state’s health budget, particularly with four obstetric hospitals within the inner city. While Crown Street’s annual birth numbers remained above 4000, the hospital appeared safe, but in January 1982 the health minister indicated that inner city hospitals needed to lose 500 beds and on 21 April 1982 the minister announced that Crown Street would close on 31 March 1983.

It is ironic that Crown Street, which had provided professional education to University of Sydney students since 1904, was not supported by the University; instead the University opted to defend the neighbouring King George V Hospital as a teaching hospital. It is also significant that, in the aftermath of Crown Street’s closure, not one of the other three inner-city women’s hospitals survived in its original form.

The campaign to retain Crown Street was passionate and vigorous and the final closure was a traumatic and life-changing experience for many of the staff. Published 35 years after the demise of the hospital, Crown Street Women’s Hospital: A History 1893-1983 is a fine tribute to those who served and supported Crown Street. It is also an outstanding contribution to the history of healthcare in Australia.

* John Myrtle is a Canberra-based researcher and former librarian. Apart from contributing his Online Gems to Honest History, John has reviewed a number of books for us, Geoffrey Bolton’s Paul Hasluck: A Life, Stephen Dando-Collins’ biography of the author Paul Brickhill, Graham Seal’s Great Australian Journeys, and Avan Judd Stallard’s Antipodes: In Search of the Southern Continent.

[1] This was not a positive experience for Ruth Park: ‘The day of my daughter’s birth I sat up in bed … and swore by God I would never again bear a child in a public hospital.’ Fishing in the Styx, p. 67.