There may be a generational aspect to intellectual endeavour among public men and women. Whether it is because statesmen (very few stateswomen then) at the turn of the twentieth century had more time to think and write (no 24 hour news cycle then) or whether they were just more complex and thoughtful than we are today is something we will probably never know.

Articles like HB Higgins’s ‘Australian ideals’ certainly reveal many sides of the writer’s personality. We have previously reproduced some of HB’s thoughts on political differences and racial issues. This time we give him his head on military matters. (This compiled on a day when a Lieutenant General appears before a Senate Committee in his smart uniform and politely tells them that he will not answer their questions.) 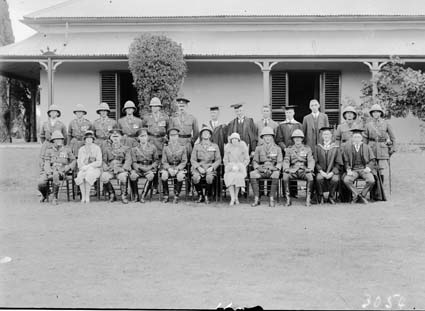 Royal Visit, May 1927: The Duke and Duchess of York with the staff of Duntroon Royal Military College in front of the Officers Mess, Duntroon House (National Archives of Australia, A3560, 1991350)

The desire of a fond mother to see her son distinguished from others by something exceptionally brilliant in his dress, is quite on the same plane as the passion for attracting special attention by diamonds in the hair, and a handle to the name. Not long since some of the finest of our Australian youths, who had grown up here without seeing, as their fathers did see, what militarism means, were led, by love of adventure and excitement, and at the call of men who strangely soiled with ignoble use the grand word “loyalty,” to seek distinction in the battlefield in a distant country – first in Africa, and afterwards in China. [He refers here to the Boer War and the Boxer Rebellion. HH] Our newspapers, and many of our public men, seriously put before us as a worthy aim, that our youth should fight side by side with the regular army of the Mother Country, whatever might be the cause of the war. (15)

Higgins discusses the links between military adventures and the commercial interests of the bourgeois section of society, as well as the perceived destiny of the Anglo-Saxon race to dominate others. He then goes on to dissect attitudes to the military image.

There has been lately evident an effort to make use of the excitement of the South African war so as to drag Australia under the control of the military martinet. There is, to weak minds, something attractive – meretriciously attractive – in the gay uniform, the plumes, the sashes, the clacking swords, the gleaming rifles, the martial stiffness of regular troops. Yet this whole system of padding, and pipe-clay, and plumage, the parade stalking of soldiers, is intensely vulgar, is absurdly untrue. Australia must make her choice between the two ideals – the ideal of militarism, and the ideal of equality. I have no doubt what the ultimate choice of Australia will be. No man can serve loyally under two such opposing standards – the standard of social reform and the standard of militarism. (16)

He makes some brief points about armaments companies and about recent remarks of the Kaiser and goes on to link militarism back to some of his earlier comments about class and status.

Related article about modern attitudes to the military.