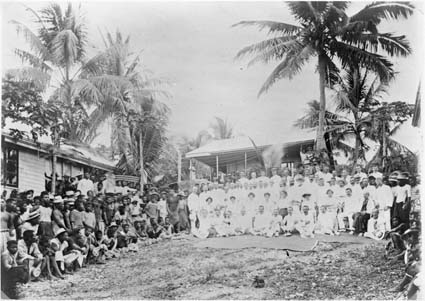 Our first highlights reel presented HB Higgins as a socialist; and so he probably was, in a non-joining, idiosyncratic, thoughtful sort of way. But he was also living on the edge of Asia and he was a man of his times. Here is some more from his 1902 piece on Australian ideals.

Higgins does not actually use the term ‘yellow peril’ but he makes his views rather clear. He blames the bourgeois, the man of business, for inflaming racial tensions by his need for cheap labour. But he recognises racial differences as givens.

Where does Kanaka labour find its chief support? Where do you find most advocates of the Chinese and Japanese immigration? Is it not in the bourgeois Chambers of Commerce, Shire Councils, Stock Exchanges, Agricultural Societies – bodies which throughout Australia seem to be dominated by profit-makers as against wage-earners?

Where do you find the chief opponents of coloured aliens? Obviously, among the labouring classes. The latter have, with a truer instinct, resulting, no doubt, from a more intimate experience and closer contact, discerned not merely the danger of lower wages, but the danger to our national character. The admixture of such differing types of civilisation is bad for both. Human life reaches its lowest degradation where two civilisations meet and cannot fully blend … (12)

Higgins quotes approvingly and at length from CH Pearson‘s National Life and Character, which argued vigorously against Chinese immigration, citing the unfortunate example of South Africa, where whites were heavily outnumbered by non-whites. Higgins then continues:

Some people speak of the Australian attitude with regard to coloured races as being churlish, selfish, un-Christian. They say that we act like the dog-in-the-manger in refusing to our black and yellow brother man the privileges of a country which we cannot yet use to its full extent ourselves. They remind us that the Scriptures enjoin us to do justice to the stranger that is within our gates. They omit to notice that the whole question is “Should we admit the stranger within our gates?”… (12)

He notes United States experience, where black labour has driven out white, and goes on:

There is a Gresham law in human beings as well as in money – the bad money drives out the good, the inferior races drive out the superior. The white people who remain as masters become lazy, imperious, licentious, disdainful of patient toil, disdainful of the labourer.

It is no answer to point to the industry of the Chinese, their patient submission to the continuous grind of labour, their lives rewarded by nothing but the supply of animal wants. We need to remember that man does not live by bread alone, that he has a higher nature to be satisfied. Nor do the conditions of the alien invasion tend to reassure us, when we find that for the safety of white men’s wives and daughters in Northern Queensland the authorities wink at, and even encourage the presence of Japanese and other prostitutes. (13)

[Note: other material on this site on Higgins can be found by using the Search function]

Print This
Click here for all items related to: Getting on with the world, People like us, The sweat of our brows