We have forgotten who coined the term ‘Peak Anzac’, but we know what it means: the apogee or highest point in the commemoration of Australia’s World War I, a process which has sometimes slopped over into ‘Anzackery’, defined in the Australian National Dictionary (2nd edition, 2016) as ‘the promotion of the Anzac legend in ways that are perceived to be excessive or misguided’. We also believe that Peak Anzac has passed.

It is hard to date this passing, but it was probably somewhere around August 2015, when the numbers expected to attend the Lone Pine ceremony at Gallipoli fell way below expectations. At about this time also, the term ‘commemoration fatigue’ began to become popular with commentators, notably historian Joan Beaumont. Some leaders of the commemoration industry felt the need to deny that fatigue had set in and there was gossip (though not hard evidence) around Canberra that the fatigue extended even to the lower ranks of that industry (perhaps those who did not get to travel to overseas ceremonies or sites as often as ‘the trumps’* did).

We thought it would be useful to look back over three years at what Centenary Watch (and the Honest History website generally) has said about the Anzac centenary ministers, or, to give them their correct titles, the Ministers Assisting the Prime Minister for the Centenary of Anzac. The careers of these ministers mirror the progress of Anzac commemoration to its peak and beyond.

When we began Centenary Watch, we said we would keep three questions in mind:

Obviously, we cannot know the answer to the first question, though one gets the feeling that the laconic, ‘no bullshit’ Digger of legend might have snorted at huge pictures of soldiers projected onto the sides of the Australian War Memorial. ‘Excessive commemoration’ relates to the remark of commentator Michael McGirr, who complained in 2004 about ‘the way in which the remembrance of war is moving from the personal to the public sphere and, with that, from a description of something unspeakable to something about which you can never say enough’.

That last phrase – never being able to say enough – became an apt description of commemoration during 2014 and 2015, with ceremonies about ships leaving Port Phillip Bay to harry the Germans or plant the Union Jack in New Guinea, the Sydney–Emden stoush, the departure of soldiers from Albany, and on to the big one at Gallipoli. (Nothing much about the Wazzer Riot in Cairo, though.) We watched the Tower of London poppies and some of us wondered, ‘why didn’t we think of that?’ (Something similar is happening here now; get knitting.) There were lots of handouts under the Anzac Centenary Local Grants Program to tidy up war memorials, build new ones, or have pageants.

Ministers kicked this along. The Minister from 2013 to 2015 was Senator Michael Ronaldson. He did his bit for relentless commemoration with a series of speeches, mostly to RSL conferences, where he seemed to be very much at home, although he had never himself worn a military uniform. He had a particular fixation about the need for children to remember that their freedom had been paid for in blood. Senator Ronaldson resigned from Parliament after not retaining a ministerial position under Malcolm Turnbull.

Senator Ronaldson’s replacement was Stuart Robert MP, a former soldier, who seemed to have been given a workload that limited his capacity to commemorate excessively. He lasted long enough in the job to get into an argument with Honest History about whether he was skilful enough to walk and chew gum at the same time. (Honest History had noted Mr Robert’s multiple ministerial positions and had suggested his Centenary of Anzac job might be the least important of the clutch.)

During a meeting with Honest History, the minister’s staff confirmed that this was, indeed, the pecking order – Centenary of Anzac was down the list – but it didn’t matter much, because the minister left his job soon after on a question of propriety, involving China but not chewing gum. That Peak Anzac had passed was suggested by Minister Robert’s conspicuously inconspicuous announcement of an important decision about the Monash Interpretive Centre at Villers-Bretonneux – just before Christmas 2015, when no-one was listening. This sort of stuff no longer seemed to be boastworthy. 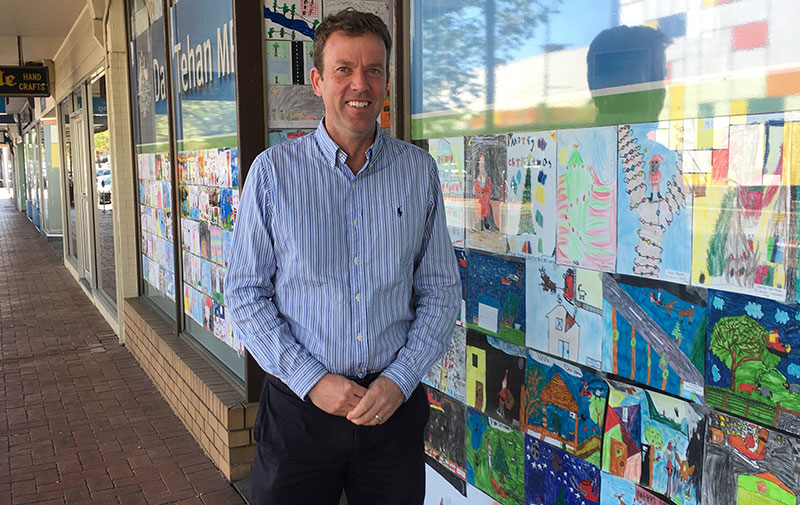 Following Mr Robert came Minister Dan Tehan MP, who has also had to handle other jobs besides Centenary of Anzac but seems to be doing all of his tasks in a low-key, no fuss way. He has been making headway on mental health programs for veterans (while wearing his Veterans’ Affairs hat), though he could do more in this area if he was not lumbered with the commitment to building the Monash boondoggle. He over-reacted to the justifiable moves by the Vietnamese government on the Long Tan commemoration but weathered a minor fuss on the winding back of commemorations in Turkey. His department briefed tour operators on a modest list of future anniversary ceremonies. Commemoration was becoming less ubiquitous. Unlike his predecessors, Minister Tehan is neither bloodthirsty nor boastful. In fact, he is a ministerial metaphor for the passing of Peak Anzac.

Elsewhere in this edition

Peter Stanley reviews an unexpected but welcome new exhibition at the Australian War Memorial, a permanent display about the Holocaust. In its own way, The Holocaust: Witnesses and Survivors is a powerful demonstration that we have passed Peak Anzac: the Australian War Memorial has consciously gone beyond its parochial, khaki Australian brief – one that it has stuck to without much variation for 75 years – to look at the impact of war on people other than Australians.

Our series Divided Sunburnt Country: Australia 1916-18 concludes for the time being with a piece on the 1916 coal strike and (soon) a bibliography from Frank Cain on the Industrial Workers of the World. As for the question we posed at the beginning of this series months ago – whether the big stories are the ones at home, rather than the ones at the front – it is clear that the two strands interact inextricably, as Joan Beaumont recognised in her book, Broken Nation, but as others, including the commemoration industry, have sometimes been reluctant to concede. Australia’s wars have involved all of us, whether in uniform or not.

Then, we have Bruce Scates’s and Melanie Oppenheimer’s book, The Last Battle, about soldier settlers in New South Wales between 1919 and 1939. Michael Piggott reviews the book for Honest History and finds it (mostly) very good. The Last Battle is about after our worst overseas war, our Divided Sunburnt Country series has been about during that war, and the Memorial’s Holocaust exhibition is about what happened to other people during a later war. Getting beyond Peak Anzac opens broader horizons.

* Venerable public service slang for senior officers; not to be confused with a proper name.