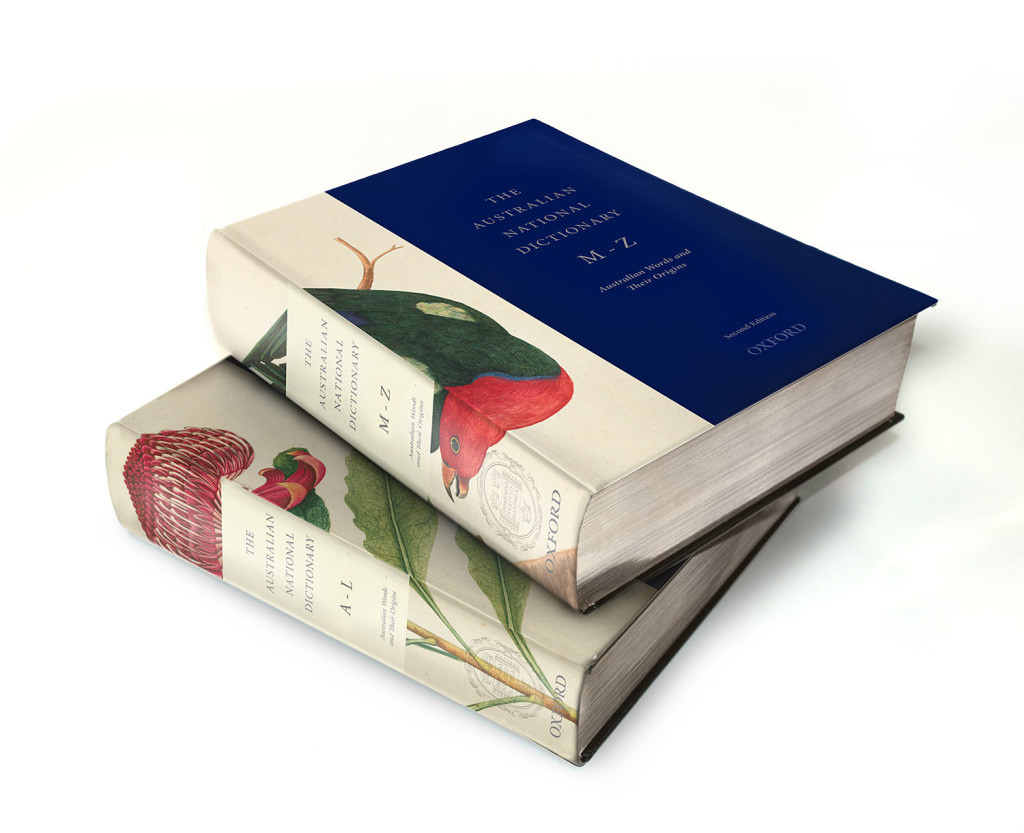 No one will be surprised that such obvious and recent Australian colloquialisms as bogan, budgie smugglers and trackie daks have been added. Many of the added terms, however, while they certainly existed in the pre-1988 period, were not included in the 1988 edition because of insufficient evidence, or because of uncertainty about whether or not they were Australian. The Internet and electronic databases have changed all that.

Some of these ‘older’ additions include: I don’t know if I’m Arthur or Martha; your blood’s worth bottling; to carry on like a pork chop; a cup of tea, a Bex, and a good lie down; full up to dolly’s wax; happy as a bastard on father’s day; it would kill a brown dog; stacks on the mill; he wouldn’t know if a tram was up him unless the conductor rang the bell; he wouldn’t work in an iron lung.

Many of the terms added are recognisably Australian, but some are certainly not. It will surprise many that the following list, made up of items commonly found in and around Australian homes, is entirely Australian: banana lounge, blood and bone, bouncinette, bunny rug, hills hoist, kitchen tidy, light globe, parents’ retreat, pergola ‘an open-sided shelter attached to a house’, pilchers, shopping jeep, splayd, teledex, texta, wettex, wheelie bin.

Words from Indigenous languages and culture are a significant source of expansion in this new edition. Whereas the first edition included about 250 words from 60 languages, the new edition includes more than 520 words from 100 Indigenous languages. Conventional wisdom has it that borrowings of this kind usually occur in the initial ‘contact’ period, and while this is true of many of the significant borrowings (kangaroo, waratah, cooee, and the like) this new edition contains evidence of a continuing transfer of words from Aboriginal languages into Australian English.

Many of these Indigenous words are names for animals and plants, sometimes the result of a deliberate policy to use Indigenous names rather than imposed English descriptive names (dayang for ‘heath mouse, itjaritjari for ‘marsupial mole’, rakali for ‘water rat’), and sometimes from an increasing interest in bush tucker (akudjura for ‘bush tomato’, gubinge for a kind of plum). Outside the domain of flora and fauna, some of the terms reflect a renewed interest in aspects of Aboriginal culture: bunji ‘mate’, kumanjayi ‘a substitute name for a person who has died’, migaloo ‘a white person’, tjukurpa ‘the Dreaming’.

For the followers of Honest History, you may be interested to know that the term Anzackery is one of the many words added to the new edition (see below). Although coined by Geoffrey Serle in Meanjin in 1967, most of the evidence for the term in print comes in recent years, particularly as the Anzac Centenary and the commemorative activities surrounding it have been the source of much debate.*

Richard Trench, in the 1857 lecture that was instrumental in getting the Oxford English Dictionary project started, stressed that a historical dictionary ‘is an historical monument, the history of a nation contemplated from one point of view’. Words encode the values of a society, and it is the aim of the Australian National Dictionary to document and analyse the history of the words and meanings that have shaped Australia. 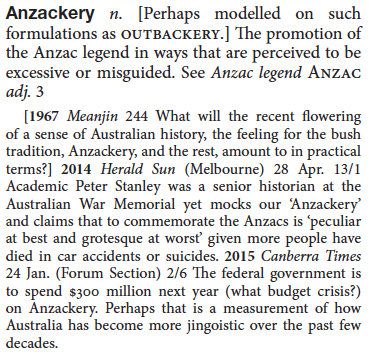 * For a note on this, go to our Centenary Watch column here, under the sub-heading ‘Anzackery definition has interesting background’. HH