On Anzac Day Honest History posted on our website our Alternative Guide to the Australian War Memorial. The Guide is intended for students from middle to senior Secondary level, for teachers and for members of the general public. Since Anzac Day the Guide has been downloaded 1223 times.

The Guide is primarily intended to encourage critical thinking and questioning. It discusses how to ‘read’ the Memorial, asking visitors to focus on what the Memorial does not say, as much as what it says. The Guide encourages visitors to consider the broad and lasting impacts of war, not simply the daring deeds and difficult deaths of men and women in uniform. It concludes with some questions about the use of language, about whether people can die in vain in wars, and whether sometimes it is better to forget.

During May, Honest History sent a copy of the Guide to every member of the War Memorial Council and offered to make a presentation to the Council. 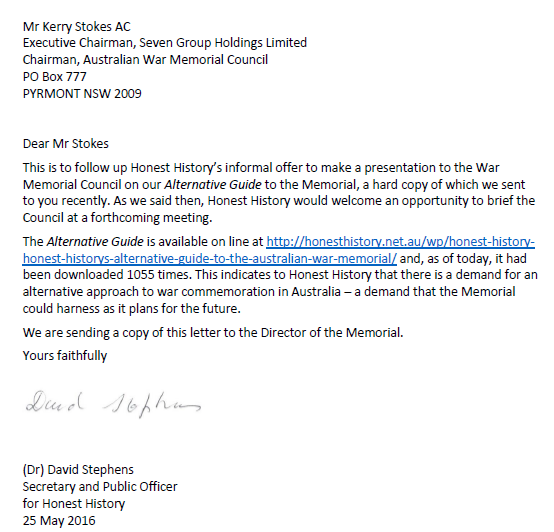 The reply was dated 30 May on the Chairman’s business letterhead but did not arrive, by email from the Director’s office at the Memorial and after we had asked twice, until 6 July. 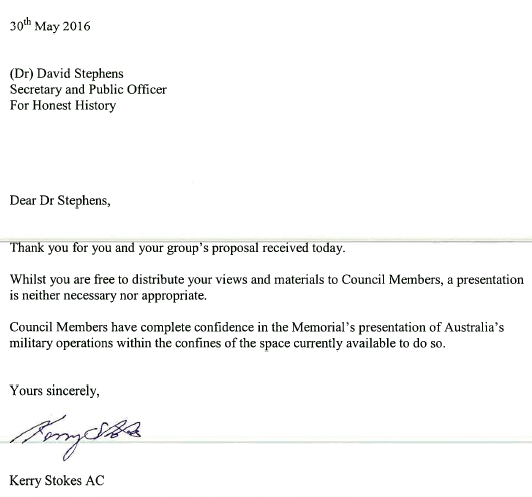 Honest History is pleased that we are free to distribute views and materials to Council members. We may do more of this. On the other hand, Honest History is disappointed that the Council has passed up the opportunity to discuss alternative futures for the Memorial, including futures which would see it presenting broader subject matter than merely ‘Australia’s military operations’.

Honest History remains of the view that an organisation which believes in itself and its story should have no qualms about contesting in the marketplace of ideas. On the other hand, perhaps the Memorial made up its mind long ago that the story it tells should not be a subject for debate.

Note: Graham Walker of the Vietnam Veterans Federation of Australia addressed the Memorial Council on 14 August 2013 on the need for a new history of the medical effects of Agent Orange in Vietnam. Honest History is not arguing that the two cases are exactly the same, simply that there are precedents for the Council listening to awkward views. In that case, it found itself in agreement with the views expressed.