Update 29 March 2018: Commemorative dates for the rest of the year

Minister Chester’s presser on important dates for the rest of the year, including the opening of the Monash Interpretive Centre on 24 April. ‘As the last year of the Anzac Centenary, 2018 is an important year for Australians to commemorate those who have served our country and to learn about Australia’s military history so that it is remembered for generations to come.’ We put the announcement in context by posting a link to former British soldier, Ben Griffin, telling the Oxford Union in 2013 why we should not fight for Queen and Country.

Update 19 February 2018: Bombing of Darwin 76 years on: Territory tourism to have even stronger khaki tinge (but focus is still too narrow)

Update 30 January 2018: New Minister unveils a tapestry and talks about commemoration events in 2018. How long for Dr Nelson? Donations from arms manufacturers to the Australian War Memorial: an interesting point

Michael McCormack, Minister for Veterans’ Affairs and Minister Assisting the Prime Minister for the Centenary of Anzac, and colleagues recently unveiled the Morning Star tapestry, which will be a central feature of the Monash Interpretive Centre, Villers Bretonneux, France, opening on 24 April.  The tapestry is on display at the Shrine of Remembrance in Melbourne till 25 February. Meanwhile, Honest History has followed the story of the Monash centre.

The Minister also spoke to Chris Smith on 2GB about commemoration in 2018. The Minister noted the large number of visitors – 6500 at 23 January – signed up for Anzac services in France, compared with the small numbers for Gallipoli 2018, but suggested this was appropriate as ‘the rightful and respectful and dignified focus has shifted to Villers-Bretonneux’.

Update 16 February 2018: There is also a glass sculpture.

How long for Dr Nelson?

We recorded that one of the final acts of the then Minister for Veterans’ Affairs, Dan Tehan, was to reappoint Dr Brendan Nelson as the Director of the Australian War Memorial. Minister Tehan’s media release did not specify how long Dr Nelson had been reappointed for. (His original term was five years, December 2012 to December 2017.)

The Australian War Memorial Act 1980 ss. 20 and 21 says the Director is ‘appointed by the Governor-General … for such period, not exceeding 7 years, as is specified in the instrument of his or her appointment‘ (emphasis added). Trying to find out what the specified period was in this case, we asked around (Office of the Governor-General, Prime Minister and Cabinet, Minister McCormack’s office, Public Service Commission, Department of Veterans’ Affairs, and the Memorial itself) without luck. No-one seemed to know or, if they did, they weren’t telling.

Finally, we were referred (by one of the above contacts) to directory.gov.au, the part of the Department of Finance’s empire which logs, among other events, appointments under legislation. There we found this:

How long for Dr Nelson? Sixteen months from today. We have no idea (yet) why 30 May 2019 is the date. We wish Dr Nelson well, regardless.

Donations from arms manufacturers to the Australian War Memorial: an interesting point

We have noted previously that arms manufacturers are conspicuous donors to the War Memorial: the Memorial’s Annual Report 2016-17 (pages 104-05 of the pdf) records as donors the world’s five largest arms manufacturers by value of sales (Lockheed Martin, Boeing, BAE Systems, Raytheon and Northrop Grumman) and the eleventh largest (Thales).

The Memorial welcomes these donations. ‘We regard it as entirely appropriate’, says Director Brendan Nelson, that defence contractors support the Memorial in its mission’. On the other hand, some people find these donations to the Memorial incongruous, at the very least. Former senior public servant and businessman, John Menadue, considering the issue, wrote last year that ‘[t]he AWM has lost its way‘. 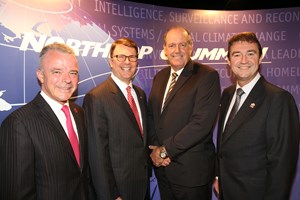 In 2011, the author of this note did some work on donations by arms manufacturers for war memorials and monuments. In 2010, the anti-corruption organisation, Transparency International, included ‘Charitable Contributions and Sponsorship’ in a list of ‘key corruption issues’ facing defence suppliers globally (page 55 of the pdf). We will check TI’s current position on this issue.