The Jauncey pen this time passes to Sarah Brasch. That feisty Kiwi, Beatrice Jauncey, had plenty of opportunity to compare events in her native land with those in Australia. We don’t know what she thought about knights, dames and royal visits but she would have chuckled that today’s Aotearoa New Zealand has wrong-footed Australia on flag reform and seems rather more level-headed on Anzac commemoration. Mark McKenna has written a related article. HH

‘They are just two young natural and charming people’, gushed Sybil, Lady Lavarack, ‘and it was often very difficult to keep oneself restrained and to remember that she was the Queen. The Royal Visit was the highlight of our lives.’

One wonders what an unrestrained Sybil would have done. Lady Lavarack was the wife of the Queen’s representative in Queensland. She presumably gave up her best bedroom for a time while the boss and her Hellenic Consort visited the Sunshine State in 1954. 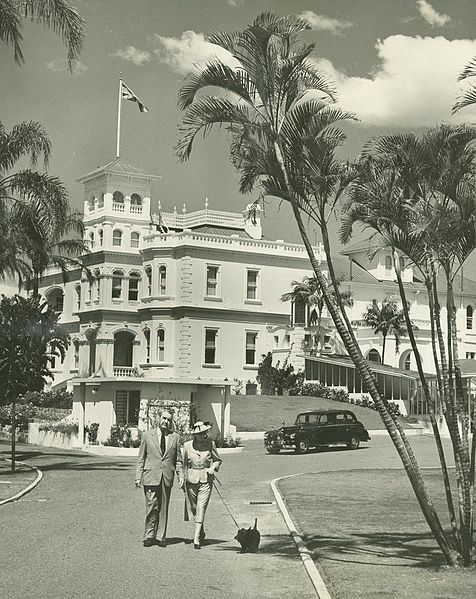 Sir John and Lady Lavarack walking along the drive of Fernberg, the official residence of the Governor of Queensland, Brisbane, 1947. With them is their scotty [sic] dog, Monty. (c. 1947) (source: Wikipedia Commons)

Lady Lavarack’s enthusiasm for the royal visit knew no bounds, along with the glamorous evening gowns, long white kid gloves and tiaras. The visit is the subject of a two-page, carefully typewritten and illuminating description in the family photo album.

Sir John Lavarack was the first Queensland- and first Australian-born governor of Queensland after a distinguished military career in both World Wars. The couple returned to Brisbane in 1946 with their Scottie dog, Monty, to take up duty at the rather nice Government House in the suburb of Paddington.

Perhaps Lady L’s excitement was partly due to the extra attractions she had laid on for the visit of the Royal Couple.

Their one free day they chose to stay at home and wandered around Government House where we had on view some Australian animals and Topsy, the Talking Pony. The Royal Couple were delighted with Topsy and spent an hour marvelling at her cleverness. In the afternoon, the Queen relaxed in her suite, writing family letters and having her hair shampooed.

How Sybil knew this last intimate fact is unknown. (How Topsy and Monty got on has also been lost to history.) Perhaps she peeped through the window or received a tip-off from one of the servants. In any case, Elizabeth II was soon back in character.

It is difficult to describe the Queen to you – for she almost has a dual personality. I have already said that we saw her relaxed, natural and full of fun at G.H. But on duty, she is serious, thoughtful, dignified and queenly and also has the gift of a quick and right thinking brain. 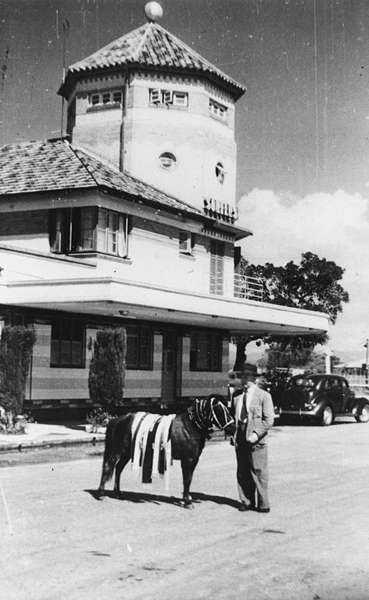 A man stands with “Topsy the Talking Pony” outside Cavill’s Hotel on the Gold Coast (source: Picture Queensland, State Library of Queensland)

No vice-regal spouse observing the most recent Royal Visit up close has yet divulged what the Duchess of Cambridge did in her suite or how her brain works but we do know she and her husband met a galah (eolophus roseicapilla) at the zoo. Meanwhile, we can report that, while their royal charges were here, the palace spies made a thoroughly detailed assessment of our loyalty to London. They found the following paragraphs in the wastepaper basket at Women for an Australian Republic HQ…

With Tony’s new knighthoods we’ve caught up to New Zealand. New Zealand! In one fell swoop, we’ve joined the leading lights in the Anglosphere. Dame Edna will be thoroughly miffed. She’s got competition. From Quentin of the glam hats for starters – the Western Front blue and black pancake beret with matching gumboots was timeless chic.

However, some people are not content with knights and dames. New Zealand now wants to remove the Union Jack from its flag because it ‘symbolises a colonial and post-colonial era whose time has passed’. Is this another medieval notion festering in the South Seas?  Could it be contagious? If yes, let’s get on board, fast.

In a recent speech in Wellington, Kiwi PM John Key also glided over the hundredth anniversary of the Gallipoli landing, saying ‘once the centenary has passed, I think it will be time for us to take some decisions about how we present ourselves to the world beyond 2015’. He was done with Anzac by the fifth sentence of his speech – it was an excellent speech, making a compelling case for a New Zealand republic while ostensibly arguing only for a new flag – and went on to give flag change objectors a right royal serve.

The Rt Hon John said that he did not ‘underestimate the significance of the [current] flag to New Zealand’s servicemen, women and their families but being respectful of our history does not lock us permanently in the past’. Emphasis added and take that, Australia! Not only will Kiwis get to vote for their Jackless banner but (horror!) the new royal blue will be black. 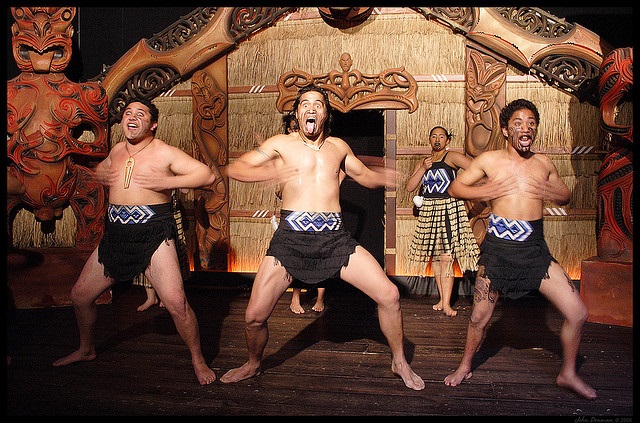 But its not only our mates over the ditch who are showing us up and speeding ahead. Scotland will hold a referendum in mid-September on whether to declare itself independent of the United Kingdom. Scotland! The Scots have not sunk QEII yet but it is definitely on the cards for the new Queen of Scotland. The next step will most likely be a modern republic of five million people with its own president. We can only look on – or back to 1999 – with envy.

Neither New Zealand nor Scotland are waiting for their Queen – also ours – to die. They are doing their own thing, asserting their sovereignty, right in front of her. We, too, used to be bold before John Howard turned us into colonial sycophants and HM awarded him an Order of Merit for ‘personal services’ to Herself. This honour did not confer a title but even a suburbanite whose father ran a service station thinks the sound of Sirs and Dames comes ringing from a past long-distant.

Tony says supporting the monarchy is as natural as respecting your parents. Calling your parents Sir Jason and Dame Kylie when you are 113 is more than odd. Perhaps he thinks a few knights and dames in loco is just what the Queen of Australia ordered? She, in fact, will approve them on the PM’s say so, as he – no doubt respectfully – asked. Thus the canny, if not downright covetous, will be sure to be mates with Tony to get one of his awards for the adoration of the monarchy.

Oh, to be fascinated by dazzling jewels, gold coaches and Kate’s clothes, to bow down before them! Prince George, however, showed us exactly what he thinks of the ex-convicts with his instantly disdainful chuck of the toy bilby at Taronga Zoo. Governors-General will occupy the top rung of the knighthoods because it is not enough only having an AC and being unable to return to private life after a comfortable five-year stint at Yarralumla, drinking the cellar dry and doing the funeral circuit. Anyone heard of Deane, Jeffery or the star recruit Hollingworth recently?

It won’t be long before the phalanx of knights and ladies (the smug legal wives) plus a dame or two (unlikely to be many of those if Tony’s Cabinet is anything to go by) will be clustered around the fire under HM’s portrait at the Commonwealth Club, reminiscing about home, with misty eyes for Scotland running wild and free beyond the wall (what was Hadrian thinking of?) and sniffing at the New Zealand flag. 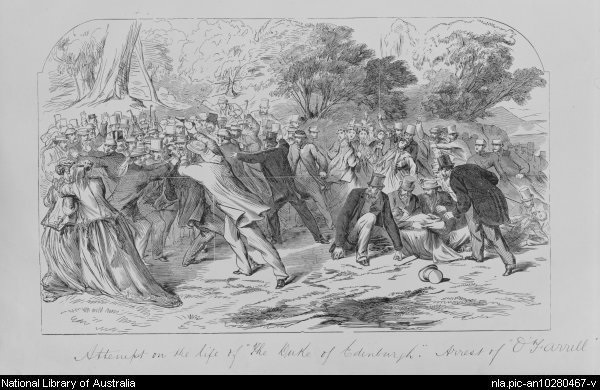 An option not recommended: attempt on the life of the Duke of Edinburgh, arrest of O’Farrell, 1867 (source: National Library of Australia, nla.pic-an10280467; wood engraving, Melbourne, c. 1868)

If Aussies are that keen to be a constitutional monarchy with knights and dames abounding – as keen as Tony thinks we are – we should immediately start hunting for our own royal family. Surely we can find a knight or dame with a splendid residence on Sydney Harbour, several large pastoral properties on our richest agricultural land (fracking welcome), a ‘beach shack’ at Noosa, a hideaway near Freycinet and apartments in London and New York, maybe Paris too.

All any knight will need is a Lady with a neat ankle who is able to curtsey as low as Janette Howard – she who set astonishing standards on the 2006 royal visit – and a couple of good-looking daughters. Preferably old money but new will do. Commission the local frock designers and we’re done.

The latest posse from Saxe-Coburg-Gotha Inc. were invited over last month to convince us it’s a good idea to have a royal family – theirs. A bit of local competition would definitely spice things up. It is a free market after all. We could even vote for the ones we want. Who knows where Tony’s knighthoods could take us? Who knows where Tony’s knighthoods will take him?

Sarah Brasch is National Convener of Women for an Australian Republic. The source for the Lavarack quotes is the Lavarack Family Album donated to the John Oxley Library, State Library of Queensland, by the Lavarack family in 2008 .