A fundamentally silly film: another perspective on The Water Diviner

‘A fundamentally silly film: another perspective on The Water Diviner’, Honest History, 13 January 2015

Honest History President, Peter Stanley, reviews Russell Crowe’s film, The Water Diviner. Other material on the film, including links to other reviews. See also our review of another, rather better, Great War movie, Testament of Youth.

Spoiler alert! This review contains spoilers: if you don’t want to know, don’t read on.

‘Inspired by true events’? Well, yes; an unnamed Australian father is indeed supposed to have turned up on Gallipoli after the war in search of a dead son; there was a First World War; there were farmers and wells in north-western Victoria … But just about everything else in The Water Diviner is made up and not very convincingly either. As so often happens with historical films, the mistakes and the misrepresentations could so easily have been avoided. This is basically a silly film, full of impossibilities, and isn’t worth the attention it’s getting. 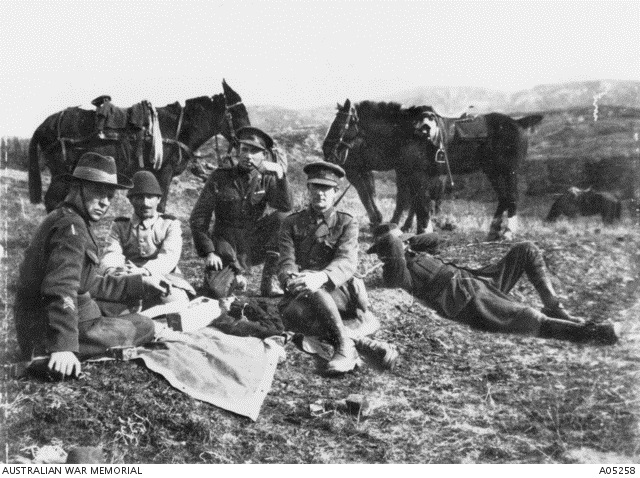 My criticisms of The Water Diviner as a filmed story revolve around its fundamental lack of credibility. A bereaved father finds the remains of two of his sons on the site of the fight for Lone Pine – a place where, the film tells us, mistakenly, 7000 men were killed. (Actually, that was the figure for total casualties – wounded as well as deaths, both sides – but still it’s ludicrous to think that finding two bodies among that many was remotely possible.) Then he somehow finds himself somewhere in Anatolia and senses the presence of his surviving son, who has somehow made the transition from prisoner of war to icon painter and Dervish. (Don’t ask how he manages to both paint Christian icons, in a ruined Greek church, and participate in Islamic Sufi ritual. Why should you ask? The producers obviously didn’t.) Add the devices of corpse divining and coffee-ground readings (not to mention the father finding the surviving son by merely sensing his presence in a random bit of Anatolia) and you have a plot that substitutes coincidences and credulity for plausibility. Excuse the spoilers, but if they save you from going to see this load of tosh you’ll thank me when you see it for nothing on TV in a year or so’s time.

As a drama the execution is clunky and predictable. Of course, we can see the romance developing between the widower Joshua and the Turkish widow Ayshe from the moment they meet. Their candlelit supper the night before Joshua is to be seen off from Constantinople resembles nothing but a stylish coffee commercial and the cute kid with astonishingly good English is just ridiculous. The film also includes the philosophical exchanges between former enemies that we have come to expect in films of this kind. ‘Lieutenant-Colonel Hughes’, based on the real Australian war graves representative at Anzac, and ‘Major Hasan’, based on Zeki Bey, Charles Bean’s Turkish informant, duly share their reflections on the Tragedy of War. ‘How much blood do you need to make [a battlefield] holy?’; ‘I don’t know if I can forgive any of us’. This is predictable and mostly just irritating.

So much for the unconvincing plot. But The Water Diviner is an historical film and its historical gaffes begin in its opening moments. We are shown Ottoman troops attacking the Anzac line on 20 December 1915, the morning after the allied evacuation of Anzac and Suvla. It’s a bright sunny, seemingly warm morning – men are wearing just tunics and shirts – quite different to the freezing dawn of Gallipoli in December. Strike one. The Turks attack, though in reality they sent out patrols to investigate the unaccustomed silence. Strike two. They find the famous ‘drip guns’, still not firing ten or so hours after the Anzacs’ departure (but the Anzacs’ ships are still close enough to be seen through binoculars). Strike three, and the film isn’t five minutes old.

At times The Water Diviner is an evocative portrayal of aspects of Gallipoli: the claustrophobic hand-to-hand fighting in the covered trenches of Lone Pine is depicted convincingly, indeed terrifyingly. (That it culminates with an Australian shooting Turkish wounded is a point in its favour.) It hints at the horror that such fighting probably entailed. The agonised groans of the mortally wounded brother are convincingly wrenching: full marks for truth-telling there. 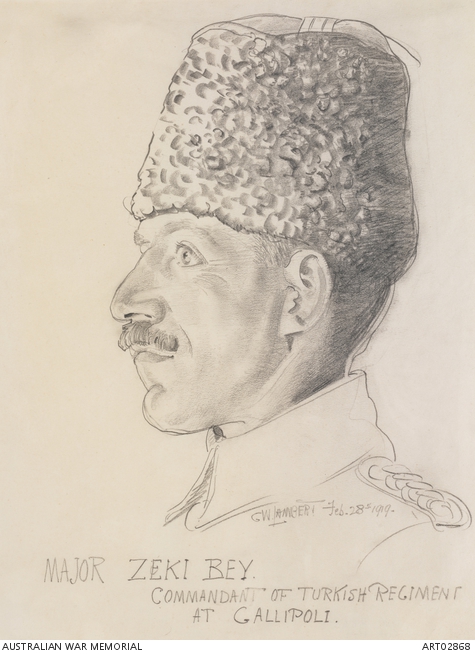 Major Zeki Bey, lent by the Ottoman General Staff to the Australian Historical Mission to Gallipoli in 1919 to provide information of the campaign from the Turkish side. He had been at Gallipoli for much of the Anzac occupation and was able to give first hand accounts (Australian War Memorial ART2868/George Lambert)

But generally the film’s writers, Andrew Knight and Andrew Anastasios, simply haven’t thought about the historical reality they are trying to depict. Presumably they want us to find the story they tell convincing – they tell us that it’s ‘inspired by true events’, after all – but they couldn’t be arsed with the details. Of course, as an Australian film it has to have a go at the silly-ass Pommy officer, who is baited, given a horse named ‘Widowmaker’ when he asks for a mount. This is so much par for the course in Australian war films that it’s barely worth mentioning. There are lots of relatively minor historical errors, none especially important in themselves but collectively demonstrating that once again film-makers basically are happy to pillage history for ‘stories’ but can’t be bothered to pay their dues by getting it right.

For example, Joshua Connor’s three sons are supposedly killed at Lone Pine, on 7 August. They’re in the 7th Battalion, but the 7th Battalion didn’t join the fight until 8 August. Alright, it’s just a day different, but it points to sloppy research; getting the right date would have taken a minute to check.

Connor’s youngest son is aged 17 years and 7 months, according to the cross set up over his grave. This is well under-age: he shouldn’t have been allowed to go overseas until he turned 19 but he must have embarked when he’d just turned 17. Of course, it was possible for under-age youths to be accepted, with or without a parent’s written permission. (Would Joshua have given his permission? Perhaps – but what would his wife have felt? The writers just haven’t thought this through.) But why introduce this complication at all, since instances of soldiers that young were so rare? The film contributes needlessly to the misconception that Australia’s Gallipoli dead included under-age youths – one in three of the Connor sons.

Does Russell Crowe especially like beards, besides his own? A British soldier in Constantinople (a Scotsman in the Lancashire Fusiliers) has one, as does Sergeant Tucker of the 4th Light Horse, supposedly a member of the ‘Imperial War Graves Unit’ [sic] on Gallipoli in 1919. British Empire soldiers weren’t allowed to grow beards in the Great War. Actually, this is even more odd. No battalion of the Lancashire Fusiliers was ever in the division that occupied Constantinople; a detail, but one easily checked. While there were Australian Light Horsemen on Gallipoli in 1919, they were members of the 7th Light Horse, not the 4th. Tucker describes being in the fight at Lone Pine but the Light Horse took no part in that attack. These are fiddly mistakes, of no relevance to the plot. But that’s the point: with a proper historical adviser they wouldn’t have been made.

The film’s only ‘research’ credit is to a Dr Meaghan Wilson-Anastasios, presumably related to one of the writers and hardly a source of independent advice, even if she possessed specialist expertise in Gallipoli or the Great War, not to mention the complex post-war situation of Turkey.

a lapsed archaeologist who worked in Greece and the Middle East, but now uses her PhD in art history and cultural economics to impart knowledge to impressionable postgraduate students at the University of Melbourne. It also comes in handy every now and then in her work as a researcher and script writer for film and TV, if only to convince producers that she might occasionally know what she’s talking about.

One is tempted to add: ‘enough said’.)

The Water Diviner, filmed partly in Turkey and produced with the co-operation of the Turkish government, paints the Greeks as barbaric invaders. That, of course, plays to Turkish nationalist mythology. But it is certainly true that the Greeks invaded Anatolia in the wake of the Great War and that atrocities were committed (on both sides, though the film portrays them as being one-sided). The Greek troops are dressed and act as murderous banditti, not as Evzones, who wore a khaki military uniform and who operated as formed military units. Some Greek troops did operate as banditti, as depicted in the film, but the film-makers have basically reflected a Turkish view of the Greek invasion.

Constantinople: panoramic view of the city in the 1870s as seen from the Galata Tower (Wikimedia Commons)

Let me differ from some commentators in the Honest History community and say that some aspects of the film that have caused offence didn’t bother me. As several people have mentioned, there isn’t any reference to the massacres of Armenians that were such an important part of the last years of the Ottoman Empire. That’s true, but it seems to me that the Armenian agony simply has no relevance to the film’s plot, risible though the plot is. Ottoman and Turkish outrages against the Armenian community deserve attention but The Water Diviner is a work of fiction, not a history of post-war Turkey. Let’s cut Russell Crowe and his writers some slack.

But not too much slack because The Water Diviner has a ridiculously implausible plot that along the way portrays several aspects of the Great War and its aftermath in highly-coloured or misleading ways. We ought to criticise both the writers and the director for failing in their duty to do their jobs.

31 comments on “A fundamentally silly film: another perspective on The Water Diviner”