Some historians and observers say that Gallipoli saw the birth of the Australian nation as men flocked to the colours. Others argue that the war ‘broke’ Australia and brought an end to its pre-war status as a world-leading social laboratory.

Evidence relevant to these conflicting interpretations can be found in a book first published in 1918. The book was entitled The Private Wealth of Australia and its Growth and its author was GH Knibbs, the Commonwealth Statistician. As well as lengthy discussion of the different methods of assessing wealth, the book contains a report of the War Census of 1915. The Census had a number of statistical problems (admitted by Knibbs) but it still provides a fascinating picture of the Australia of 1915. This article (Part I) will look at the mechanics of the Census and Part II will examine its results.

Joan Beaumont in Broken Nation describes the background to the War Census. The rising casualty toll in the Dardanelles demanded new manpower and the pressure rose for military conscription. As Labor Attorney-General, WM Hughes determined upon a War Census, based on a British model. Introducing the Bill on 14 July, Hughes said:

This measure arises out of, and finds its justification in, the tremendous conflict in which Australia, as part of the Empire, is now engaged. Its object is the organization of the forces of the country so that we may put forth the greatest effort of which we are capable. It provides for the registration of our resources both in men and material.

The Bill does not contemplate conscription, nor is a measure to legalize conscription necessary so far as service within Australia is concerned. I wish to make this plain at the outset, because in the minds of some is the fear that we may resort to a method of carrying on this great struggle altogether foreign to the spirit which has animated the British nation for many hundreds of years.

I do not believe conscription is necessary. I do not say that the future may not hold within it possibilities which may shatter our present conceptions of what is necessary, for no man can say what this frightful war may yet involve. But this Bill has not been introduced with a view to conscription.

The War Census Act received Royal Assent on 23 July. Labor doubters were pacified with the inclusion in the census of the questions on wealth – their view (as set out in, for example, Labor Call) was that, if there was to be conscription, it should be of wealth as well as of manpower – and by Hughes’s claims that the intention was simply to achieve better organisation of the nation’s resources for war.

The Census was conducted 6-15 September 1915. All males between the ages of 18 and 60 years had to fill in this card (reproduced here from Knibbs; it is also available in the Schedules to the Act): 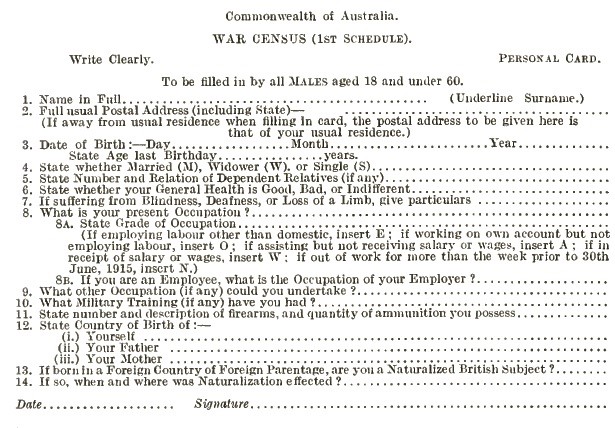 Then, all property holders were required to fill in this two-sided card: 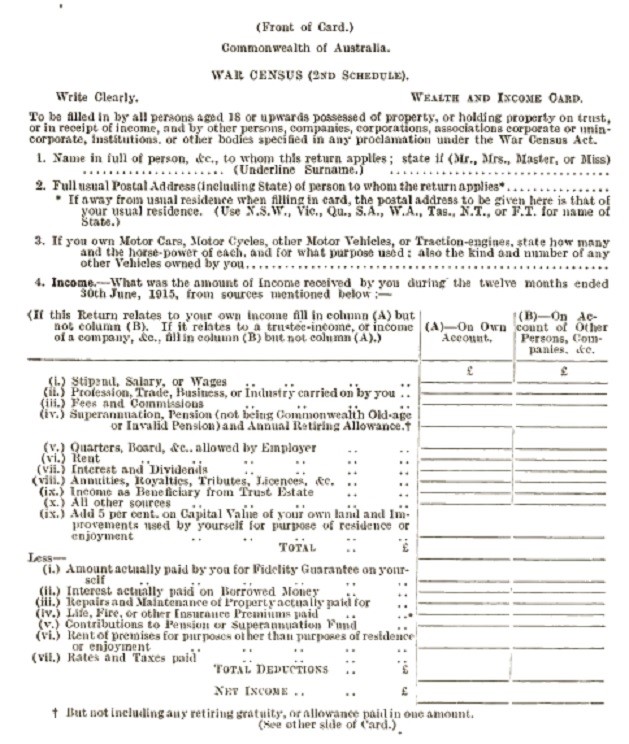 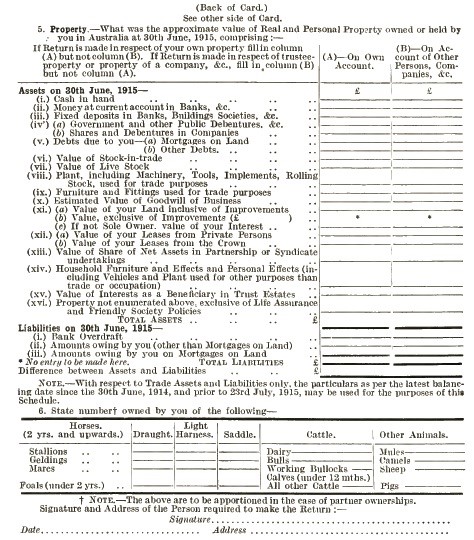 Despite Hughes’s assurances, groups for and against conscription soon formed. ‘The people of this country, through their Parliamentary representatives’, trumpeted the Universal Service League, ‘must voluntarily adopt the principle of compulsory and universal war service for all classes’. The Melbourne Truth newspaper responded: ‘It is evident that an attempt is to be made to stampede the people of Australia into accepting conscription, although the necessity for such a drastic measure has not yet been shown’.

Fisher, overworked, ill and dreading the prospect of conscription, resigned as prime minister and, on 27 October 1915, Hughes took his place.

Ministers consider it vital [Hughes said the following day] that there shall be no departure from the policy laid down by the Fisher Administration. They are of opinion that the war should be prosecuted with the utmost vigour until a complete and final victory is assured, and will not consider any suggestion for a peace until that victory has been secured.

More than a mere census was on the agenda, however; the same hundreds of Commonwealth officers who were collating the results of the War Census were also running a vigorous recruiting campaign, with the new prime minister as the chief spruiker. This form went out for males aged 18 to 45 years to fill in: 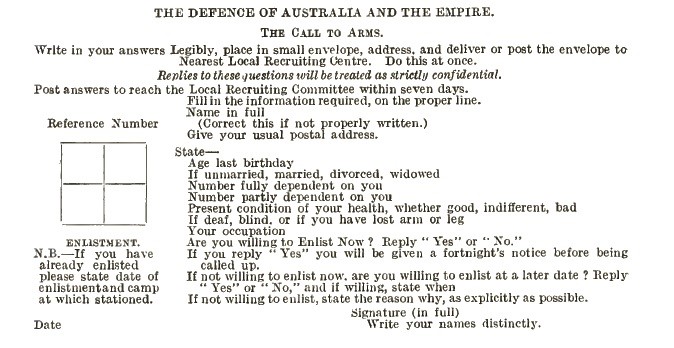 With each form went this entreaty from Hughes: 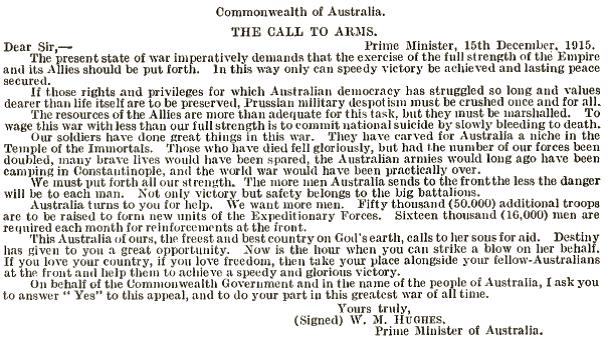 Part II next time will look at some of the findings of the War Census.