Time and Bob Menzies’ essence: lifting the cover on Australia 1960

Note: this article includes a photograph of an Indigenous Australian who has died

‘Indignation’ and ‘hilarity’ jostled each other through Parliament House, Canberra, as advance copies of Time magazine circulated on 31 March 1960. William Dobell’s cover portrait of Liberal prime minister Robert Gordon Menzies provoked Coalition MPs to fulminate at this ‘travesty’, ‘almost an insult to Australia’. Labor members gloated over Dobell’s caricature of Menzies as ‘arrogant’ and ‘supercilious’. Menzies said nothing, sustaining the artist’s hope that he had captured the PM’s ‘disdain-for-critics look’. In a Daily Telegraph cartoon, Bob re-assured his family: ‘As a public relations job it’s a masterpiece’.

Time magazine caught Australia as its economy was about to slide off the sheep’s back to slip aboard bulk mineral carriers. US investments were overtaking the flow of British capital. The 5000-word survey endorsed the Liberal Party’s view that the Fifties had been ‘a miraculous decade’ with a boom in home and car ownership, and the acquisition of consumer durables on hire purchase. Time saw further than the architects of that abundance by welcoming the associated relaxation of social and cultural restraints. Those factors continue to divide opinion, making issues raised by Time in 1960 pertinent today [2000].

Time had underestimated the splash that its Australia issue would make. An increased print run sold out in two days to Australians thrilled that the world was at last paying them the attention they deserved. A German newspaper editor meanwhile set down the limits of overseas interest when he advised his Melbourne correspondent, Egon Varro, not to switch from airmail to cable ‘unless half of your continent gets blown away’. In the same week as the Time feature, that reporter concluded that his ‘most important generalization’ after twelve years in the country was that ‘life in Australia since the late ‘forties has always been several paces ahead of the utterances of her public figures’.

Time went further than most of the locals in recognising ‘the dynamism which has really got hold’. Despite the contretemps about the cover, the accompanying eight-page colour photo supplement was more subversive of the old Australia. Just as Time‘s text ignored kangaroos and boomerangs, so its photographs were free of koalas and sheep. None showed the outback. Instead, the world saw twenty-storey skyscrapers and the Snowy scheme providing electricity for industry, not irrigation for agriculture, which was relegated to ‘a string of cultivatable oases’.

This metropolitan gloss was remote from the view that Time had given in April 1944 when its cover pictured prime minister John Curtin beside a boxing kangaroo. That story had been accompanied by a shot of sheep safely grazing in front of Parliament House. 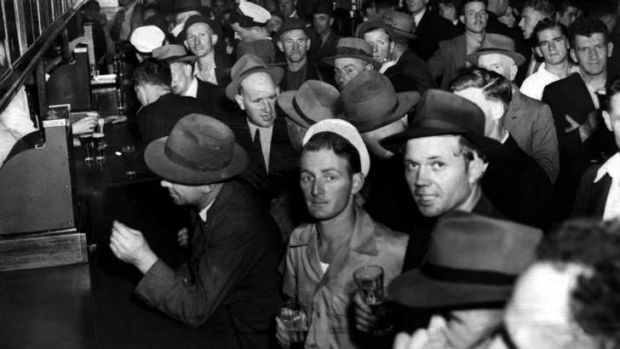 In 1960, Time focussed on the new and emerging. The opening paragraph dealt with uranium and weapons testing. Since World War Two, electricity generation had more than doubled and factory production trebled. Time noted the discovery of bauxite but missed the potential of iron ores to transform the economy after the lifting, a few months later, of a pre-war ban on their export to Japan. Brief mention of the abolition of import licensing on 21 February was as close as Time came to recognising that the manacle on Australia’s development remained the deficit in its balance of trade. Instead, the report card emphasised the brake that unions placed on productivity, and joked about the country’s limited trading hours for pubs and shops. Melbourne’s six o’clock beer swill appeared in Time beneath the painting of Chloe in Young & Jackson’s.

If letters to the editor were any guide, most Australians judged Time‘s story by its cover portrait. Inside, the pen picture of the prime minister was also warts and all. It juxtaposed the claim that Menzies had transformed the nation almost single-handed against reminders of his failure to enlist in the Great War and the export of pig-iron to Japan in 1938. Time revelled in the repartee of ‘Ming the Merciless’ who, on being accused in Parliament of a superiority complex, had replied: ‘Considering the company I keep in this place, that is hardly surprising’. That jibe struck at his own cabinet as much as the opposition.

Menzies assured Time that the ‘colonial flavor’ prevalent in his boyhood was being overtaken by ‘an outlook peculiar to Australia’. The old lack of self-confidence, however, had taken a new form. Australians suffered from ‘the Southern Hemisphere complex’ under which everything here became ‘the biggest in the Southern Hemisphere’. Accordingly, Time compared Australia’s industrial production favourably with Brazil’s.

Time‘s research on the story was directed by its Hong Kong Bureau chief, Stanley Karnow, who bought shares in four Australian companies to underwrite his confidence in the new Australia. Karnow had spent the 1950s in Paris among writers and artists, and so arrived in Australia alert to the condition of high culture. In 1944, Time had noted that an Australian boiled ‘when told unjustly that his bloody island lacks culture’. Sixteen years later, Karnow perceived that post-war immigration meant that Australia was no longer a ‘British fly in Antipodean amber’. Expatriates still dominated his galaxy of star performers, but he could point to the lottery to fund an opera house for Sydney, the funding of universities, support for local painters and playwrights, and the inaugural Adelaide Festival of Arts.

On the other side stood the censors and wowsers. Alan Seymour’s The One Day of the Year had fallen into the category of ideas labelled ‘but not in Adelaide’. South Australia’s Attorney-General compelled touring US satirist, Tom Lehrer, to drop five of his songs. The State’s Vice Squad closed a Festival wine-tasting.

The story’s headline ‘Out of the Dreaming’ captured the spirit of Time’s celebration. Aborigines played no greater part in the Time feature than in the minds of white Australians – being confined to a black-and-white photo of ‘stone-age’ dancers, and a mention of the late Albert Namatjira. Hence, non-indigenous Australians would have been perplexed to read that they had ‘taken over the philosophy of the Aborigines, who lived entirely in the present, referred to both past and future as “the dreaming”‘.

But a wake-up had been sounded in Australia. A generation of labor technocrats was breaking through. EG Whitlam became deputy leader of the Federal opposition in March 1960. ACTU advocate, RJ Hawke, brought professionalism to the unions. One further mark of the coming Australia would appear later in 1960 with the sale of the eighty-year-old Bulletin to the Packers who installed the right-wing radical Donald Horne as editor. Horne removed ‘Australia for the White Man’ from its masthead, and oriented the weekly away from rural readers towards city executives, a rival for Time. In December 1964, Horne’s best-selling collection of his social commentary, The Lucky Country, scorned Menzies’ Australia ‘as a lucky country run mainly by second-rate people who share its luck’.

Karnow’s base in Hong Kong helped him to see the Pacific through the perspectives of Asia’s nationalists whom Menzies feared as crypto-communists or resented for weakening the Crown and Empire. He had, however, broken the habits of a lifetime by visiting Australia’s Near North in 1955. That trip confirmed generations of prejudice about not drinking the water after he took months to regain his appetites. Undaunted, he ventured back four years later.

The White Australia Policy restricted Australia’s provision of what Menzies hoped would be ‘qualitative leadership’ in Asia, as shown by the Colombo Plan that allowed Asians in to study at Australian universities. In Time’s story an anonymous diplomat boasted: ‘Nowadays, we can talk to anybody in the world without any sense of innate inferiority’. The problem, however, was innate superiority, evident when Menzies referred to India’s prime minister Nehru as emotionally ‘primitive’. Canberra’s inability to deal with the government in Beijing, except for trade, did not help its leadership ambitions.

Time positioned Menzies as the elder statesman of the British Empire just as its membership tilted away from being a white man’s club. As many coloureds as Caucasians attended the Prime Ministers’ conference in London in May 1960.

In February 1960, British prime minister Harold Macmillan had delivered his ‘Winds of Change’ speech to the South African parliament. Time reported the March 21 shootings at Sharpeville in the same issue as its feature on Australia. When Menzies went in to bat for the sovereign right of South Africa to manage its domestic affairs, he appeared to be defending Apartheid. Afrikaners called him ‘Oom [uncle] Robert’. A Tanner cartoon in the right-wing Sydney fortnightly, the Observer, mocked Menzies’ masterly inactivity towards Apartheid with a series of Menzies figures expostulating: ‘Deplorable business’. ‘Purely a domestic affair’. ‘But that doesn’t mean I approve…’ ‘…of this ghastly TIME cover’. The publicity from Time‘s story meant that his maneuvering on Pretoria’s behalf attracted additional opprobrium. 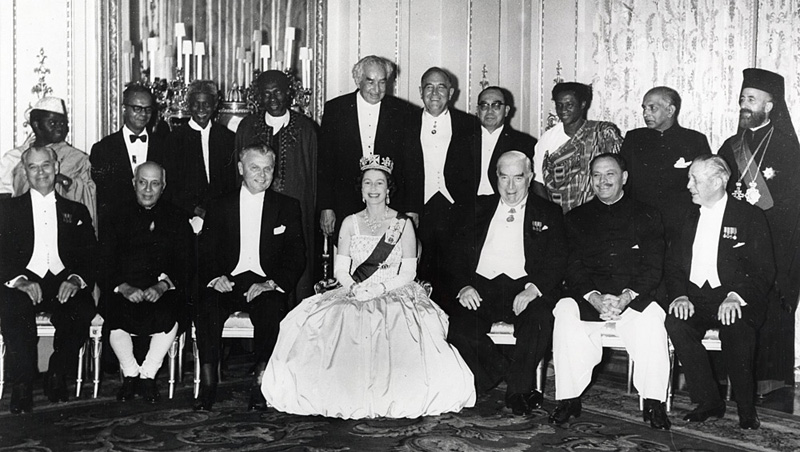 Nonetheless, Time had given Menzies one of the best weeks he would have for the next two years. His government’s attempt to ease inflation by allowing in more imports blew out the trade account. To curb demand, Treasury imposed another credit squeeze in December 1960. At elections a year later, the Coalition scraped home by one seat.

Despite Karnow’s insightfulness, Time missed several issues which were about to erupt and which remain [in 2000] prominent: Aboriginal Black Power activists took charge of campaigns for land rights; a whittling down of White Australia opened paths towards multiculturalism; the pill and equal pay campaigns prepared for the women’s movement; and consumer protection branched out into environmental protests. Pundits will misread the future of those conflicts for as long as they misjudge the Age of Menzies as an era of stability.

Those who now look back to a golden age of over-full employment ignore the stop-go policies used to juggle the balance of payments, still the danger spot in Australia’s economy. Equally, Left historians have trouble seeing beneath the Cold War to the leavening of public affairs from revolutions in everyday life. Menzies detested television, was irritated by advertisements and spurned the company of businessmen. By 1964, he had to agree that the motor of capitalism had shifted gear from promoting production to pushing consumption. Sixties rebelliousness and self-indulgence germinated in affluence, not anarchism, in mass marketing, not Marxism.

A time traveller back to the good old days of 1960 could enjoy black-and-white television, a bowdlerised edition of Brendan Behan’s Borstal Boy, foreign movies once a month at a film society, Ben Ean Moselle to accompany apricot chicken in a packet of French Onion soup, and steerage to London on one of the Greek liners that sailed every few weeks. Many Australians would welcome a week’s holiday in 1960, but who would settle? 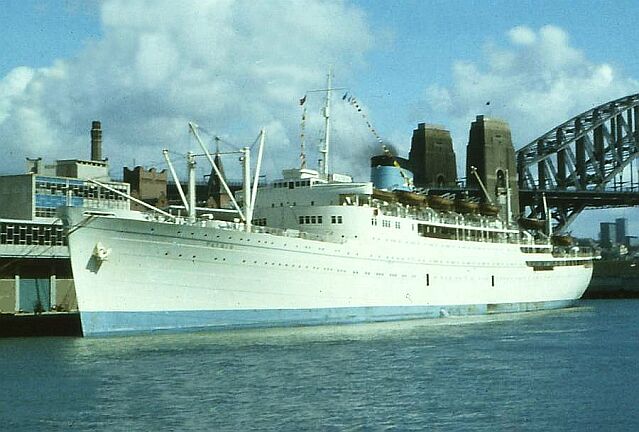 RHMS Patris, which sailed between Europe and Australia 1959-75, carrying migrants in one direction and tourists (and sometimes returning migrants) in the other (SSmaritime.com)

This article was written in 2000 and appears on Humphrey McQueen’s Surplus Value website. As with Humphrey’s previous contributions to Honest History (use our Search engine to find them) we thank him for his generosity.