The Fitzkrieg reaches Fromelles and Pozières (review of FitzSimons)

David Stephens reviews Peter FitzSimons’ Fromelles and Pozières: In the Trenches of Hell.

This is a better book than this reviewer expected. He edited a trenchant but balanced review of the same author’s Gallipoli last year and then fielded a torrent of anguished emails and Twitter direct messages from the book’s author, who seemed not to grasp that it was OK for a book reviewer to have a well-founded opinion that the book’s author disagreed with. Then the current reviewer wrote a piece about how Fitz the popular author could with effort (and more time per book) become FitzSimons the historian – and was instantly blocked on Twitter by Fitz-FitzSimons.

Given this background, the reviewer was not looking forward to Fromelles and Pozières. As it turns out, though, the latest Fitzian doorstopper (more than 850 pages in hard copy or 13 652 locations on Kindle, including nearly eleven thousand of actual text) from Bandanaman is not too shabby – flawed but not too shabby. It is still more Fitz than FitzSimons but it’s line ball.

The biggest stylistic difference between Gallipoli and Fromelles is that the breast-beating, editorialising poltergeist that kept popping up in the former volume and saying things like, ‘Good on yer, mate’, or ‘See, what about that?’ is in Fromelles more continuously present, as a kind of Private Fitz in the ranks, a reasonably unobtrusive Forrest Gump, less raucous, more thoughtful, more prepared to let the story tell itself. The other difference is, of course, in the nature of the story: while it was possible in Gallipoli to ladle out regularly the patriotic, ‘birth of a nation’ markers, in this new book the sheer bloody horror of events at Fromelles and Pozières imposes disciplines on the author. We hear a number of times from protagonists that Gallipoli was ‘a picnic’ compared with France and Fitz-FitzSimons reflects that in his story-telling.

The author uses a fairly well-known paragraph from Charles Bean’s diary; it could sum up the Australians’ war in France. It is ‘Honest Bean’. This quote should be written in large letters in the entrance of the Australian War Memorial in place of the misleading ‘Here is their spirit’ motto – misleading because the Memorial tells nowhere near the full story and thus does not fully distil that spirit – and quoted in commemorative speeches, rather than the schmaltzy, ‘Official Bean’, ‘in Australia they will be proud of this’. This is the paragraph (from the War Memorial’s website; FitzSimons’ version has some inconsequential variations).

Pozières has been a terrible sight all day … The men were simply turned in there as into some ghastly giant mincing machine. They have to stay there while shell after huge shell descends with a shriek close beside them – each one an acute mental torture – each shrieking tearing crash bringing a promise to each man – instantaneous – I will tear you into ghastly wounds – I will rend your flesh and pulp an arm or a leg – fling you half a gaping quivering man (like these that you see smashed around you one by one) to lie there rotting and blackening like all the things you saw by the awful roadside, or in that sickening dusty crater. Ten or twenty times a minute every man in the trench has that instant fear thrust tight upon his shoulders – I don’t care how brave he is – with a crash that is a physical pain and a strain to withstand.

Examples like this would also go well in anthologies for schools. They could balance the sanitised, gung-ho style of official children’s publications like Audacity. A couple of years ago, as part of whatever exhibition was then current at the Australian War Memorial, a remark by Alec Raws (one of FitzSimons’ main protagonists, killed at Pozières), about his tunic being ‘splattered with men’s brains’ was displayed on the wall adjacent to where members of the Memorial’s education staff played ‘Service and Nurse Uniform Dress-ups’ with young children. The Memorial should aim for more such juxtapositions and work them into its education programs.

The story in Fromelles, the book, commences in Egypt, post Dardanelles campaign, chugs its way through the Mediterranean and southern France and, by Kindle location 4000, has us in Picardy in a bright late June. The suspense (at the time and for the reader today) has been nicely built. Then, in Fitzian argot, ‘Jesus Christ Almighty, all hell breaks out’. We get Fromelles in great detail, followed by Pozières in great detail and a brief, reflective epilogue, including the story of how some bodies were discovered under green fields 90 years on. The events of six weeks take up 12 long chapters. 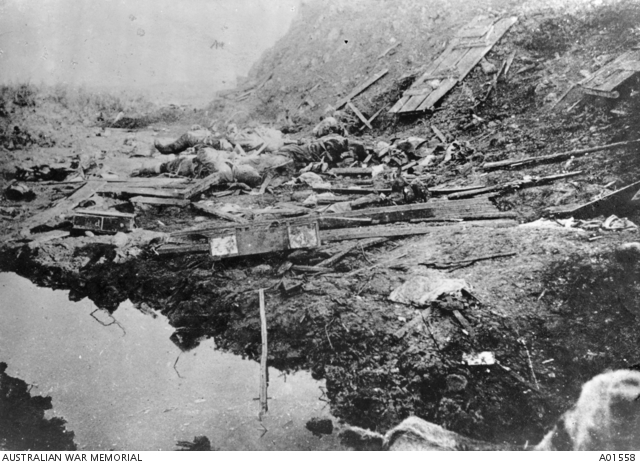 FitzSimons clearly admires Bean as the on-the-spot chronicler of ‘the Australian experience, their extraordinary courage, the grandeur of their achievement’. This is FitzSimons’ summary of what Bean did but it is his own objective as well. He relies heavily on Bean: a search for ‘Bean’ in the text of the Kindle edition of the book throws up more than 350 references, or better than one reference for every two pages of text.

The historian of memory, Jay Winter, reckons Bean is ‘unreadable’ so perhaps it is good that a modern author is paraphrasing him. But FitzSimons’ reliance on Bean means he mimics Bean’s flaws (excessive detail, officers’ perspective, tendency to romanticise). The bolstering by other eyewitness accounts (Barwick, Bishop, Cass, Elliott, Knyvett, Pflaum, Raws and company) does not fully make up for this. Moreover, at some points in the book there are what seem to be imaginative reconstructions for which the sources are often unclear.

The villains and heroes are clearly set out for the reader, however. The Germans come out of the story rather well; the ‘bad guys’ are the English generals, Haig and Haking, and the Australian, McCay. The ‘heroes’ are ‘Pompey’ Elliott, who later described Fromelles as ‘incredibly blundered’, Brudenell White, various Australian captains and colonels, such as Cass, Foss, Gibbins, Hutchinson and Leane, and, of course, Albert Jacka, best on ground at Pozières. (The sporting allusion here is deliberate: some of the description does read like a particularly brutal Wallabies game and there are some vignettes of soldiers, renowned for their throwing arms at cricket, now turned to hurling grenades.) Other ranks get less of a run: the word ‘Corporal’, as in ‘Corporal Smith’, appears just 72 times in the book (and a good number of those refer to Corporal Adolf Hitler), compared with 257 times for ‘Lieutenant’.

As with Gallipoli, the author and his researchers have made a worthy attempt to find evidence from ‘the other side’. German material has been translated and juxtaposed with Australian sources referring to the same events, underlining the common experience of the horror of war. The interpolation here and there of unflattering nicknames for the enemy (notably ‘Squareheads’) is jarring at first but you get used to it as part of Private Fitz working himself into the role.

The book is honest in its depictions of battlefield slaughter but it is far too long; repetition dulls the edge. By the end one finds oneself humming that old refrain, ‘Another one bites the dust’, as another worthy Aussie soldier qualifies for the Roll of Honour. The bibliography includes entries for other writers on this part of the Great War (Barton, Bennett, Burness, Peter Charlton, Corfield, Lee, Pedersen, and so on). More frequent digressions to quote or paraphrase some of these authorities (rather than simply using them for primary material) would have been a relief from what becomes at times a rather tedious authorial voice. There is a notable unwillingness or inability to step back from the description and draw conclusions; Fitz has said elsewhere he does not see this as his role. Realistic description is welcome but here it lurches occasionally into ghoulishness, as the author tries to hit high notes, and even flippancy, as with the death of Captain Gibbins at the end of chapter 13 and some of the sub-headings within chapters.

Not taking too much notice of what other writers have written is part of being a populist writer: this reviewer remembers hearing Fitz tell his audience at a promotion for the author’s previous book that there had been a lot of books written about Gallipoli but ‘guess what, I haven’t written one’. The audience loved it. 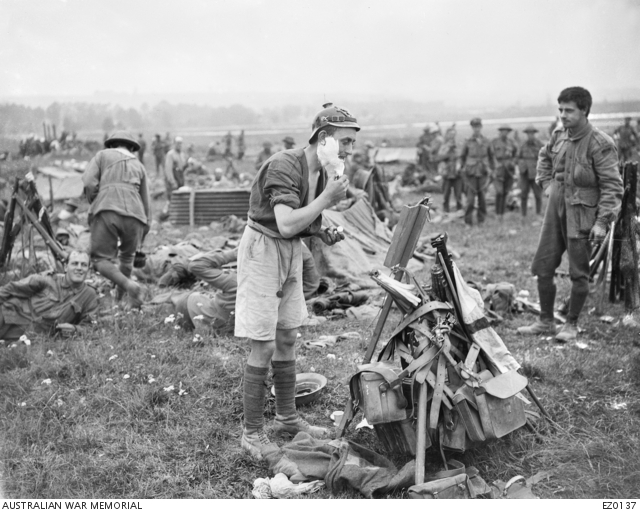 All that having been said, the bottom line or ‘butcher’s bill’ is clear enough. The Australians suffered 28 500 casualties at Fromelles-Pozières, including 9000 killed, all this in a month and a half. The count was about the same as at Gallipoli but it took less than one-fifth of the time. All up, the Battle of the Somme accounted for 1.1 million casualties, British Empire, French and German, for very little gain on either side. ‘We are supposed to be civilised’, says Bert Bishop, one of FitzSimons’ eyewitnesses. ‘The most beastly and cruel animals wouldn’t do this to each other.’

Another way of looking at it would be to conclude that some of the best qualities of humankind – bravery, comradeship, fortitude – were prostituted to the worst of causes – the killing of other human beings for tactical and geopolitical ends. To use the word ‘grandeur’ for this ‘achievement’ is grotesque. Returning for a moment to the way we teach children about desirable qualities, this perspective shows the need to find cases where these good qualities have been displayed by people who are not wearing military uniforms.

This reviewer has not read other accounts of Fromelles and Pozières to judge how FitzSimons stacks up against the competition but, beneath the Fitzian quirks and the excessive length, the book seems a tradesmanlike attempt to come to grips with a deeply disturbing story of war. It is not a bad volume to trigger an interest in military history (if that is your objective and bearing in mind that Fitz says he is not a historian but a ‘storian’) providing the reader then moves on to less one-dimensional fare. Meanwhile, regular readers of Fitz will lap up this new offering. Fitz’s coffers will not suffer.