Stephens, David: War Memorial comes clean – sort of – about the help it receives from arms dealers Northrop Grumman and Raytheon

A short while ago we pointed to what looked like an error in an answer from the Australian War Memorial to a Question on Notice asked during hearings of the Senate Committee on Foreign Affairs, Defence and Trade. It seemed to us that the Memorial had failed to mention donations it had received from arms manufacturers Northrop Grumman and Raytheon.

Senator Whish-Wilson (Greens, Tas) put a question to the Memorial in similar terms to those raised by us and he received an answer.

Here is the question and answer as it related to Northrop Grumman:

1. Why were Northrop Grumman not included in the answer to QoN 166? War Memorial advertisements—for we are young and free—at the Canberra Airport during 2017 included the words ‘proudly supported by Northrop Grumman’.

2. Does this support qualify as a contribution from Northrop Grumman?

1. The Memorial did not receive a cash donation from Northrop Grumman during the 15-16 to 17-18 financial years. The support provided by Northrop Grumman consisted of an in-kind provision of advertising space for two periods at the Canberra Airport. This advertising initially promoted the Memorial’s brand campaign and lastly promoted the public program marking the centenary of the armistice that ended the First World War. As this agreement was for in-kind support and not the provision of funding directly to the Memorial, it was not listed amongst the other cash based supporters.

2. The financial component of this in-kind support was provided by Northrop Grumman to the Canberra Airport directly, and not to the Memorial.

In terms of the benefit received by the Memorial (and by Northrop Grumman, which picks up brownie points under the rubric of ‘corporate citizenship’), there is no difference between a contribution in kind – Northrop Grumman picking up the tab from Canberra Airport and saving the Memorial picking it up – and an actual cash donation direct to the Memorial. The distinction the Memorial makes is cute but misleading. The outcome is the same: an advertisement for an institution that commemorates war dead appeared over the name of a private corporation that makes billions of dollars (sales of $US 21.4 billion in 2016) from selling military kit that kills people. And that is crass.

Note also that the original question put to the Memorial referred to ‘a total figure for the value of contributions’. That surely includes contributions in kind. (Dr Nelson in May also mentioned an in-kind contribution from QinetiQ, misspelled by Hansard as ‘Kynetic’.) 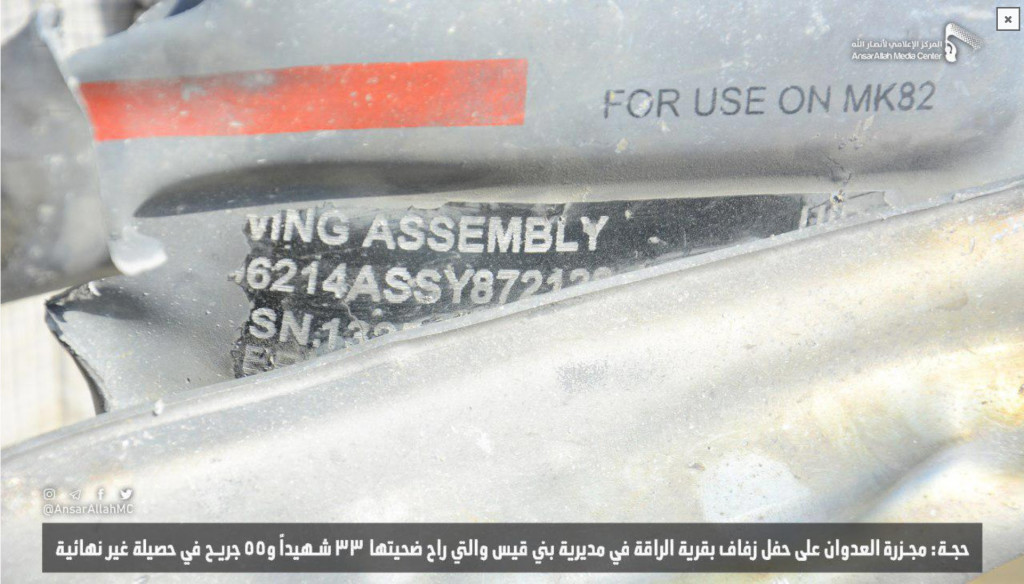 Part of a GBU-12 Paveway II guided bomb made by Raytheon and used in a Saudi-led strike on a wedding party in Yemen, killing women and children (Bellingcat)

Secondly, regarding Raytheon (sales of $US 22.9 billion in 2016), here is the remainder of the question and answer:

3. Why were Raytheon not included in the answer to QoN 166?

It would be useful if this ‘practice’ could be made clear in future Annual Reports; most readers would assume that a list in a report for a particular period (such as a financial year) would relate to that reporting period, especially when the list of donors follows immediately after a paragraph commencing ‘During the reporting period’. Thus in the Annual Report for 2016-17 (p. 91):

During the reporting period, the Memorial generated $13,018,049 in partnerships, major donations, and bequests.

The Australian War Memorial gratefully acknowledges the generous support of the following organisations, families and individuals, without whom much of our work could not be achieved: [the list follows]

During the reporting period, the Memorial generated $2,428,552 in partnerships, major donations, and bequests.

The Australian War Memorial gratefully acknowledges the generous support of the following organisations, families and individuals, who, over the years, have assisted in the delivery of a significant level of project activity: [the list follows]

Cumulative listing has not always been the Memorial’s practice, however: the Annual Report for 2014-15 (p. 149) says this:

The Australian War Memorial gratefully acknowledges the generous support of the following individuals and organisations for the 2014–15  financial year [emphasis added; the list follows].

As shown above, the 2017-18 report includes the phrase ‘over the years’ at the head of the list of donors, which helps a little. The lack of clarity follows a pattern of obfuscation in the Memorial’s reports. And that is too clever by half.