Minister Tehan has announced the Armistice Centenary Grants Program (Armistice Grants) a program of grants to commemorate the centenary in 2018 of the Armistice ending World War I. The program makes $7.5 million available at the rate of $50 000 for each federal electorate. Details are here.

Honest History closely analysed the earlier Anzac Centenary Local Grants Program (ACLGP) 2013-14. That program cost more than the new one will – a total of around $19 million at $125 000 per electorate (more than 1700 applications were received though some did not receive grants) – and we can make some other comparisons, too. We will look at project criteria, consultation process, and eligible organisations. 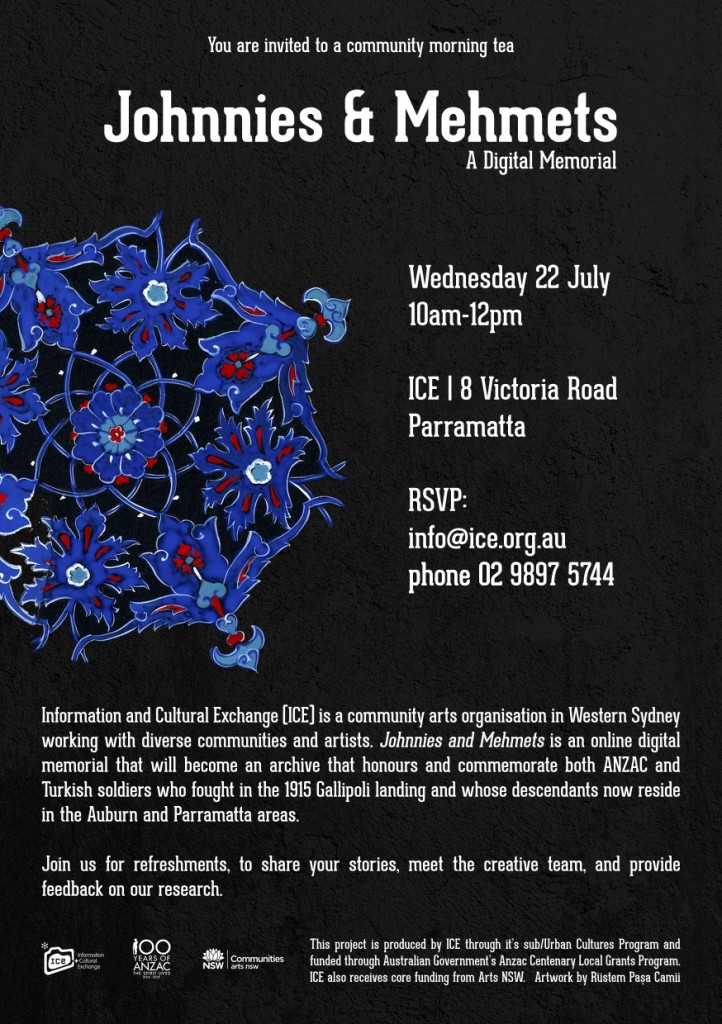 Event funded by ACLGP, Parramatta 2015 (Ice). ‘Johnnies & Mehmets’ is a reference to words attributed to Mustafa Kemal Atatürk, although there is no strong evidence that Atatürk ever said or wrote the words.

A project ‘must be a local community-based commemorative project or activity that links directly with the centenary of the Armistice, commemorates the end of the First World War, remembers Australian service men and women from any conflict and celebrates a just and secure peace’. Specific projects could be:

There are some further caveats, a long list of eligible items, and further lists of ineligible activities and items. The guidelines for the new program are about three times as long as the guidelines for the ACLGP. Honest History has not attempted to discover whether this is because of difficulties with the previous program. We will ask the Department of Veterans’ Affairs to comment on this and will print its reply without amendment.

Honest History analysed the first 606 grants under the ACLGP and found 52 per cent of the projects involved the building of new memorials and monuments or the refurbishing of old ones (the second and third dot points above). These projects accounted for 53 per cent of the money allocated to that stage. Events and research (the first and fifth dot points) accounted for another 43 per cent of projects and 44 per cent of money. The ACLGP could be summarised as being mostly for bricks and mortar, pageants and school projects; the Armistice Grants could be characterised in similar fashion. 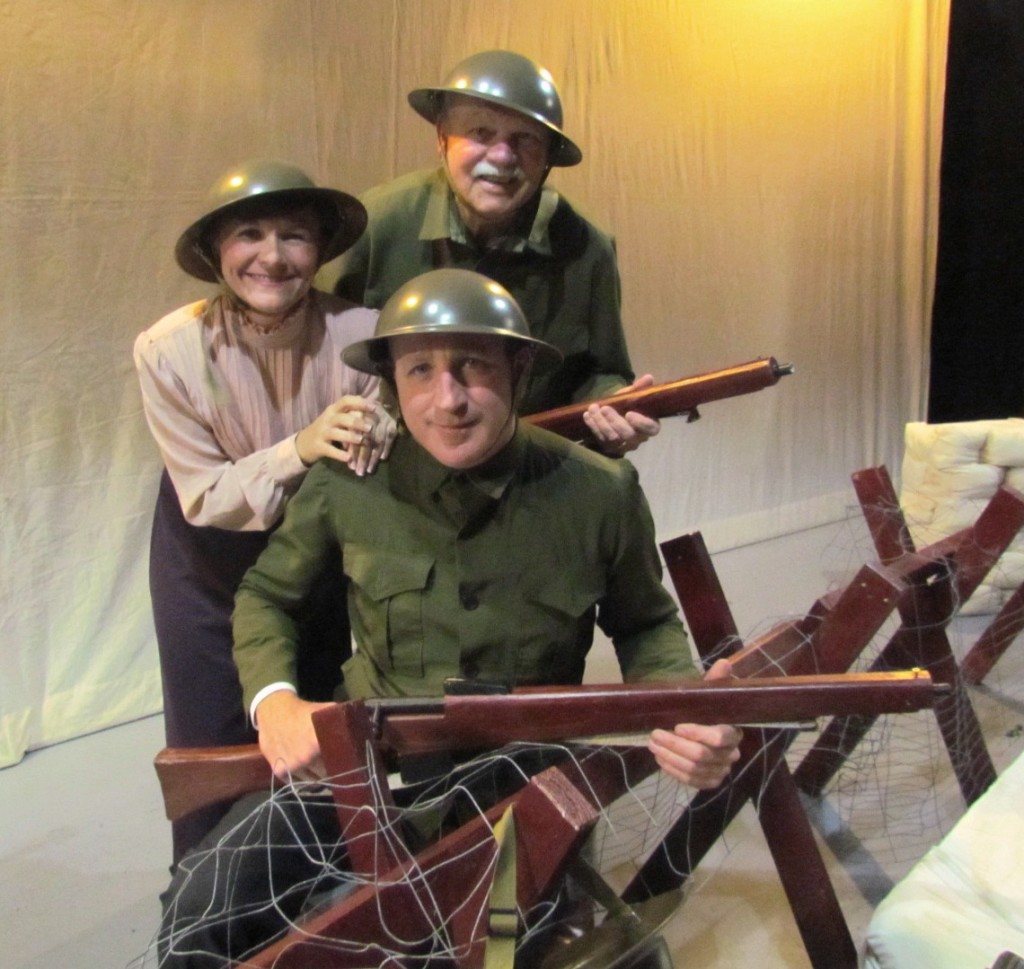 A theatre group in the electorate of Luke Howarth, MP for Petrie, (front) received $4735 from the ACLGP to stage a performance of a ‘It’s a Long Way to Tipperary’ (Luke Howarth website)

Honest History has not tried to establish why ex-service organisations, including the RSL, are not explicitly mentioned in the Armistice Grants consultation guidelines. In practice, the change is likely to make little difference, given that MPs can just revive existing committees and given the likely strong interest from ex-service organisations in securing grants. (Further regarding the RSL, see Appendix to this article.)

These are the ‘organisation types’ who can apply for an Armistice Grant: incorporated associations (for grants of $10 000 or more); ex-service organisations; not for profit community organisations; schools or other educational institutions; historical associations; local government bodies. This is a fairly broad list and similar to the one that applied to the ACLGP.

In 2014, the Honest History analysis of the ACLGP said this:

It is the narrowness of the project criteria, rather than the bodies who are able to apply that makes the Program so restrictive and unimaginative …

It is not surprising that a program which starts from a particular conception of what is appropriate commemoration and sets its ground rules accordingly should produce a predictable range of projects. The community – or, at least, the part of it which is interested – is presented with a received view of commemoration, one that has essentially been unchanged for almost 100 years [the article compared the ACLGP with commemoration projects directly after World War I and found not much had changed]. It accepts the received view and goes on to propose projects which will perpetuate it.

If, on the other hand, the criteria had been wider (and perhaps the committees broader) the … Program might have generated local projects in areas like drug rehabilitation, homelessness, employment, respite care, juvenile offenders’ programs, teachers’ assistance, and aged care, as well as programs directed at veterans suffering post-traumatic stress disorder or the effects of Agent Orange …  [Such projects could have been designated “Anzac Centenary” to add a commemorative element, just as projects in the latest scheme could have been labelled “Armistice Centenary”.]

It is possible also that non-traditional projects might more closely reflect the ideals that we attribute to the men and women who died in war. Presumably the dead of World War I had a view of the sort of Australia they wanted to see after the war – “the land fit for heroes”, an Australia which was better than the one they left behind. Not necessarily an Australia covered by memorial gardens, dotted with monuments and echoing to the sound of constant commemorative pageants.

A century on [after the end of World War I], it would be nice to think we have moved on from the way we thought then. The Anzac Centenary Local Grants Program was an opportunity to do commemoration differently. It has been an opportunity lost.

The Armistice Grants Program looks like being another lost opportunity. 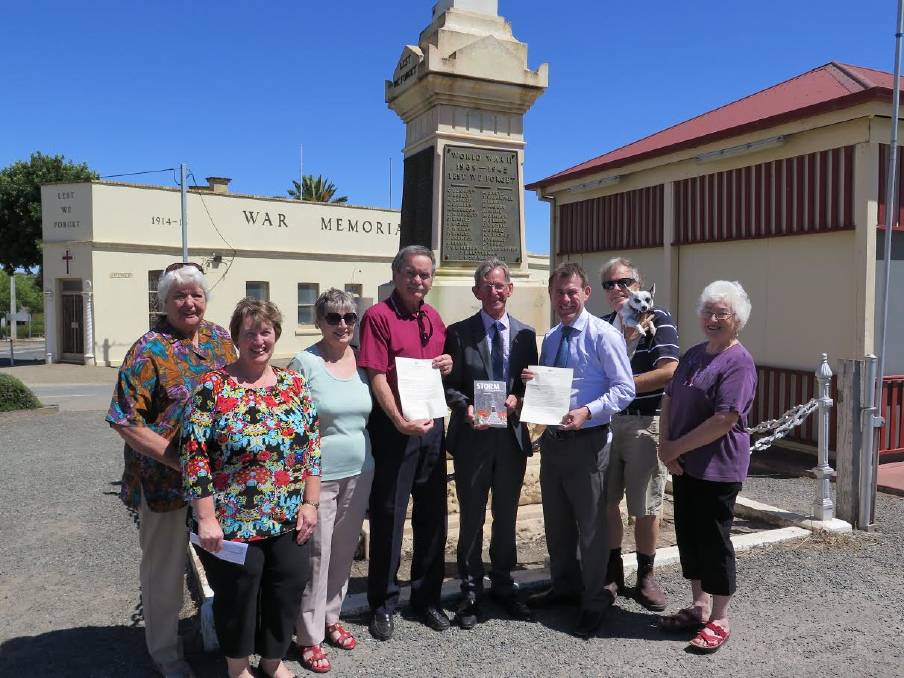 Light Regional Council, South Australia, Kapunda, 2015, receives $30 000 from the ACLGP. Local member, Council and RSL representatives shown (Barossa Herald). ‘The funding will support the upgrade of the “Avenue of Honour” in Kapunda and … a travelling exhibition of soldiers who served in the First World War.’

Update 27 September 2017: in view of comments on Twitter let’s reiterate that the problem I have with the Armistice Centenary Grants and the ACLGP is not with the people who work hard to implement projects that have received money under the program guidelines but with the guidelines themselves, which limit the range of acceptable projects. Were the guidelines different – perhaps including local projects like those mentioned above (3rd para under ‘Conclusion’) – community groups would no doubt respond with suitable projects. DS

We checked information about the former Anzac Centenary Local Grants Program (ACLGP, linked from here) and found, as examples, the following grants approved in New South Wales and Victoria for the period 6 August to 9 October 2014: