The Australian War Memorial has been talking for more than a year about its desire to extend its building in a number of directions, mostly underground. Memorial Director Brendan Nelson has made good use of a number of platforms to put the case, although the public dollars spent so far have been no more than a few million for scoping studies.

If the complete plan comes off, the cost could be $500 million, spread over a number of years. A recent revelation (under Freedom of Information) of an early plan for the extensions showed the institution’s floor space doubling.

The Memorial has opened a public consultation phase on its website, inviting people to ‘have your say’. (Update 17 December 2018: report on the consultations, which gathered feedback from just 134 individuals.) Dr Nelson kicked this off via a report yesterday in The Australian, appropriately 104 years on from the hectic weekend when the British Empire, led by Australia, found its way into the Great War. As Australia led the way into the Empire’s war, the Memorial is now the world leader in a particular form of war commemoration. 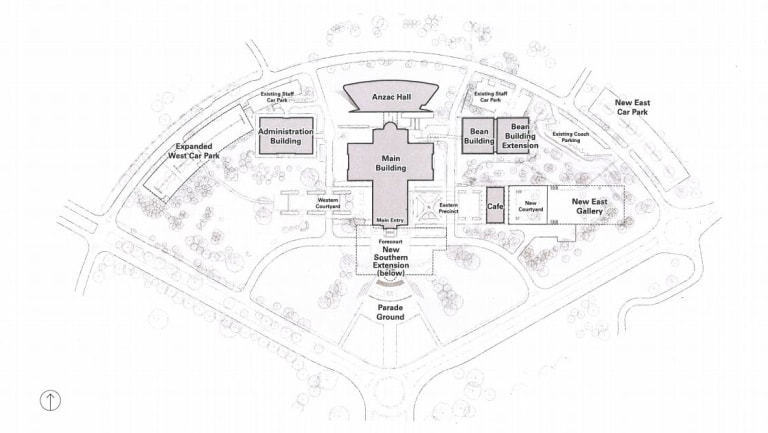 Early plans for the extensions (Fairfax/AWM)

Honest History has followed the Memorial’s extensions proposals closely, and we touched upon them in our submission to the current parliamentary inquiry into Canberra’s national cultural institutions. Some questions that those ‘having their say’ might well consider include these:

There is more on this in the Honest History submission to the parliamentary inquiry. The submission argued, among other points, that there is no justification for allocating funding between national institutions on the grounds that some are more worthy, or more crucial to the national psyche, or more ‘sacred’, than others.

The Memorial’s effort to consult about its extension plans is welcome; it is to be hoped that this effort grows into a genuine debate. The Memorial in recent years has been better at preaching an ‘Anzac gospel’ than in debating with constructive critics.

The Memorial is looking to next year’s Budget for a government decision on the full $500 million. It says it has bipartisan support for its plans. Barring general elections, the Budget will be brought down early in May 2019. Dr Nelson’s current term as Director ends on 30 May 2019. Recently, he approvingly quoted an unnamed visitor to the Memorial: ‘whatever the government spends on the Australian War Memorial … will never be enough’. If nothing else, $500 million of extensions to the Memorial would be an expensive legacy of its formidable Director.