‘As the War Memorial destruction goes on, and Boeing’s man takes control, FOI throws dim light on the process’, Honest History, 5 May 2022 updated

The destruction of the Australian War Memorial is unstoppable. And Brendan Nelson, the man who as Director of the Memorial did most to start the destruction and redevelopment process by lobbying the government to stump up $500 million, is now back as Chair of the Memorial Council, though there must be some question about where this places Matt Anderson, Nelson’s successor as Director. 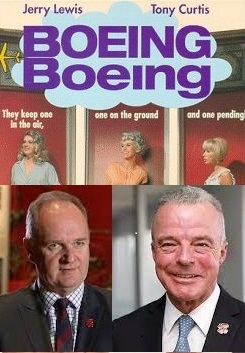 The 1965 movie Boeing Boeing may provide some clues. It has the essential airline reference; the new Chair is also President of Boeing Australia-New Zealand-Pacific. It is about an old colleague who drops in unexpectedly on the hero, disrupting his plans. It was originally a French farce, with lots of doors opening and closing and lots of rushing around. There are many farcical elements about the approval process for the Memorial redevelopment, the parliamentary Public Works Committee, the Minister for the Environment, the Australian Heritage Council, and the National Capital Authority essentially being superfluous players after the prime ministerial November 2018 announcement that $498 million had been allocated for the project.

Talking of doors opening and closing, the 2018 announcement followed assiduous lobbying by Dr Nelson as Memorial Director and Kerry Stokes as Memorial Council Chair – they knocked on doors and the doors opened readily. Further, Dr Nelson has passed a number of times through the ‘revolving doors’ between government, the arms industry, and the commemoration industry. The arms trade is one of the case studies in the Australian Democracy Network’s (ADN) recent report, Confronting State Capture, and Dr Nelson is mentioned 21 times in the 68 page report. The ADN defines ‘state capture’ as ‘the exercise of power by private actors to shape policy in their self-interest’ and one of its characteristics is ‘revolving doors and personnel exchange’.

Here is the original Boeing Boeing poster with Jerry Lewis and Tony Curtis. On a more serious note, Boeing in 2020 was the world’s third richest arms company by value of sales and 55 per cent ($US32 billion) of Boeing’s total sales in 2020 came from arms. So, apart from making large passenger aircraft, Boeing is one serious gunrunner. Honest History heard the term ‘gunrunner’ applied to arms companies by a former Head of the RAAF, so we are quite comfortable with using it. The term implies that members of the Australian Defence Force cannot do without these products but have ambivalent feelings towards those who make and sell them. This comes as annual world military expenditure in 2021 exceeded $US1 trillion for the first time.

The close involvement with the Memorial of one of the world’s largest arms dealers raises further questions: will Boeing get an inside track on sponsorship deals with the Memorial; or is Boeing just a stalking horse for other cashed-up gunrunners, most of whom have had previous dealings with the building that Prime Minister Morrison has called more than once ‘our nation’s most sacred place‘? (Dr Nelson worked – gratis – for French arms dealer, Thales, while he was Director.)

As noted above, Prime Minister Morrison in November 2018 said the government was providing $498 million for the Memorial project over nine years. We know also that then War Memorial Council Chair Stokes gave his personal guarantee that the cost of the project to the government would not exceed $500 million.

Budgets since the November 2018 announcement have made provision for the project, with the actual amounts being found in what is known as Appropriation Bill No. 2, covering capital expenditure. The Budget Papers for March 2022-23 were interesting in this area, showing that the Memorial’s ‘total equity of $1.85 billion in 2022-23 is an increase of $170 million from 2021-22, represented by the increase in equity injections to fund capital expenditure’ (DVA, Portfolio Budget Statements March 2022-23, para 3.1.2, ‘Explanatory notes and analysis of budgeted financial statements’).

[Update 28 October 2022: By comparison with the above, the Budget Papers for October 2022-23 say the Memorial’s ‘total equity of $1.8 billion in 2022-23 is an increase of $121 million from 2021-22, represented by the increase in equity injections to fund capital expenditure’ (DVA, Portfolio Budget Statements October 2022-23, para 3.1.2, ‘Explanatory notes and analysis of budgeted financial statements’). The reasons for this discrepancy of $49-50 million. LINK]

That is, capital expenditure on the redevelopment project. The equivalent section of the DVA PBS for 2021-22 shows an increase of $138 million in equity injections to fund capital expenditure. So, there were increases in capital injections totalling $308 million over two Budgets. Do these increases in equity injections from government mean that the cost of the Memorial’s development project is blowing out? Is the Memorial still on track to meet the project budget of $498 million? These might be interesting questions for Additional Estimates after the election.

Meanwhile, the Australian National Audit Office should update the Memorial’s equity figure as presented in the ANAO’s draft work program for 2022-23, which has ‘Management of the Australian War Memorial’s development project’ as a potential audit. The current ANAO words are: ‘The heritage building, land and cultural assets held by the memorial are valued at over $1.3 billion’ (emphasis added). As set out above, the latest Budget papers show the Memorial’s equity has been valued at over $1.5 billion for some two years and is now valued at $1.85 billion.

All that aside, we can report the results of FOI claims on the Memorial and the Department of Agriculture, Water and the Environment. We asked the Department (responsible for the Australian Heritage Council) in February for the following information:

1. Minutes or record of meeting of the Australian Heritage Council (AHC) meeting of 21 December 2021, insofar as they relate to a heritage management plan (HMP) submitted by the Australian War Memorial (AWM).2. Advice from the AHC or DAWE providing feedback to the AWM on the AWM’s HMP following the AHC meeting 21 December 2021.3. Any responses received by the AHC or DAWE from the AWM to the AHC’s post–21 December feedback, including any AWM requests for further feedback.

We asked the Memorial essentially the same questions and this additional one:

The results came back in March and April and here’s a summary:

The AHC ‘conditionally approved’ the Memorial’s HMP, meaning that the Memorial had to respond to some ‘minor comments/feedback’ from two members of the AHC (designated the ‘Historic Heritage Pair’, ‘Historic Pair’ or ‘Historic Experts’) .

The ‘minor comments/feedback’ amounted to less than two pages and covered three suggestions for edits plus some remarks (and a suggested paragraph) on the need for the HMP to say more about the controversy over the demolition of Anzac Hall – not the controversy about the project as a whole.

The Memorial’s responses to Honest History’s FOI claim state that the HMP has been amended to take account of the feedback from the Historic Pair. If that is the case, the version of the HMP on the Memorial’s website does not yet show this: not one of the Memorial’s six responses is reflected there.

Is there something missing here? The full FOI responses, including the usual redactions and bureaucratese about exemptions, reasons for decision, and so on, are here: from the Department (FOI Reference 25970); more from the Department; from the Memorial (2021-22-04). But the responses leave out an important point – the story is not yet complete, as is clear from the Memorial’s answer to Senator Steele-John’s Question on Notice following Additional Estimates in February:

The Heritage Management Plan 2021 was described on the Memorial website as having ‘conditional approval’ based on advice from the Department of Agriculture, Water and the Environment that, ‘The Council agreed to conditionally approve the document [HMP 2021] pending the comments from the Historic Experts being addressed appropriately.’

Note that all comments applied to background material in the Heritage Management Plan 2021 only and the Council accepted the Memorial’s heritage management policies and processes without need for alteration. As at 21 March 2022 the Memorial has responded to the comments by the Historic Experts and is awaiting final approval from the Department (emphasis added).

We will ask the Memorial and the Department whether final approval has yet been given and when this will be reflected in the version of the HMP printed on the Memorial’s website and the accompanying text. It is surprising that neither the FOI response from the Department nor that from the Memorial mentioned the need for final approval. Obfuscation and obscurity has been part of this project from the beginning and it continues. Something for the ANAO to consider if it undertakes the audit.

Update 6 May 2022: DAWE has advised that the Minister’s delegate approved the revised HMP on 12 April 2022 and notification of the outcome has been provided to the Memorial.

Update 7 May 2022: The relevant page of the Memorial’s website has been updated and the linked HMP is now the final version as approved by the Department, and including the revisions requested by the Historic Pair. We note that it took 3 1/2 years and thirteen revisions to get to this point.

Part of the dickering was due to the need to first demolish Anzac Hall so the final HMP could reflect this fait accompli. The delay at the end between the Minister’s delegate’s approval on 12 April and the changes to the website nearly four weeks later can be put down either to slackness at the Memorial or to the relative lack of importance the Memorial attaches to the HMP, whatever it says.

Finally, we note that the two supporting documents attached to the HMP, the Heritage Register Report and the Heritage Strategy Report, are both dated 2008. Neither of them, given their dates, takes any account of the current redevelopment project and the destruction it is wreaking on the fabric of the building as it existed in 2008.

* David Stephens is editor of the Honest History website and was convener of the Heritage Guardians group opposed to the War Memorial project.

One comment on “Stephens, David: As the War Memorial destruction goes on, and Boeing’s man takes control, FOI throws dim light on the process”