Transportation to the eastern states ceased around 1850 but continued later in Western Australia. Having some ten convicts in my ancestry I am inclined to regard Don Brian’s 2018 CD as the tunes of Australian Royalty. These songs describe experiences my forebears might have shared. Whether or not you feel a personal connection with these songs, however, they evoke an important feature of Australia’s social growth. As Mary Gilmore put it in her poem Old Botany Bay ‘the nation was, because of me’. Nor is the convict era so distant. The Address-in-Reply in the new Australian Parliament in 1901 was moved in the House of Representatives by a transportee, WH Groom from Toowoomba!

These songs are mainly laments as the convicts cursed their luck and their appalling conditions. Norfolk Island was a place of secondary punishment. The desperation of convicts can be found in the legendary death pacts some entered into, wherein one would find release when a second killed him. The second invited execution as a way to end his misery. Don Brian avoids exaggerating the horrors of Norfolk but gives a balanced account of convict experiences. The CD and accompanying booklet are not designed as a comprehensive history but as an evocation of convict song. 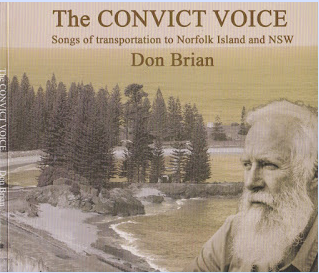 Don Brian has a powerful voice, honed singing sea shanties with Forty Degrees South (formerly the Roaring Forties). Don and Sue Brian conduct tours of Norfolk Island. Don also volunteers as a researcher at the Maritime Museum in Sydney so listeners to this CD can be assured that the material is accurate and will not mislead or create myths about the wretched settlers in chains. The songs on the CD are as much by the convicts as about them and so are primarily sympathetic.

There is a rich variety of arrangements. For example ‘The ‘Norfolk Island exile’ and ‘Currency lasses’ are rendered unaccompanied while in ‘Adieu to judges and juries’ and ‘Piracy of the Wellington’ the evocative saw joins in. This unaccompanied singing establishes the importance of clear diction and ensures that the voice conveying the words is always paramount. This clarity is one of Don Brian’s great strengths. Both ‘Barrow’s tour of Hell’ and ‘Macquarie Harbour’ are simply spoken. The accompanying booklet provides the lyrics of the songs, while dustcover notes succinctly acknowledge the provenance of each song.

The ironic ‘Assisted passage’ has tasteful guitar accompaniment. There is tuneful whistle on ‘Moreton Bay’, ‘Jim Jones’, ‘Currency lasses’ and the ‘Liverpool judies’. There is the rollicking ‘The Catalpa’, while Jennifer Brian sings the dance tune ‘Street hearts of the Female Factory’, with its happily defiant chorus. Where Brian needed to set the words to tunes, his choice is always appropriate as, for example, the traditional tune for ‘The Cooking pot riot’.

‘The Convict Voice’ ensures that a period of history and song is evoked skilfully and sympathetically. Don Brian and his collaborators have created a CD of power and musicality.

* Tony Smith is a former academic and now folklorist and folk singer, who has written for Eureka Street, Pearls and Irritations, and other publications. He has previously contributed to Honest History on the ‘Peace Angel’, Maggie Thorp, and the use of music in the peace movement during the Great War.

One comment on “Smith, Tony: Review note: Don Brian: The Convict Voice: Songs of Transportation to Norfolk Island and NSW”