The Anzac centenary will have a musical element. The Anzac Centenary Advisory Board’s March 2013 report to the federal government noted the long-running work on the Gallipoli Symphony and supported the commissioning of a choral Australian War Requiem. The New South Wales Government is also believed to be tuning up, as have New Zealand and Albany, WA. Nicholas Routley’s work, described below, shows that there are musical possibilities in all wars, even mythical ones. His vision of presenting the Mahabharata as three music-dramas promises to transcend the Indian setting to make universal points about war and peace. HH

The Mahabharata is one of the two classic Indian epic poems, the other being the Ramayana. These poems occupy roughly the position in Indian literature that the Iliad and the Odyssey occupy in European literature. The author of the Mahabharata is Vyasa, although modern scholarship argues about Vyasa’s authorship in much the same way as it does about Homer’s authorship of the Greek epics. Vyasa is also a character in the epic.

The date of the events described in the poem is uncertain in terms of Western chronology but in Indian tradition it takes place at the beginning of Kali Yuga or Age of War. As the Yugas last around 3600 years, and we are currently nearing the end of Kali Yuga, a date of 1500 BCE may be suggested. At this time the gods were not only, or perhaps not even principally, represented by images but, as in the words of the Bible, walked upon the earth, and Krishna was one of these.

The original poem contains a huge repertory of stories, many of which are intertwined with each other, and some of which are self-contained. I have taken one of the central stories, that of the rivalry between two related branches of a single dynasty. At a number of points it is by no means fanciful to draw comparisons with modern wars and the impacts they have had on those who fought them and those who watched and waited.

Summary of the story

Dhritarashtra, the elder son of King Vichitravirya, should have inherited the kingdom of Bharat (India) upon the death of his father, but Dhritarashtra was born blind. His younger brother Pandu therefore became king. This opened up dynastic and territorial ramifications of the kind that has underpinned many conflicts in the centuries since these mythical ones occurred. 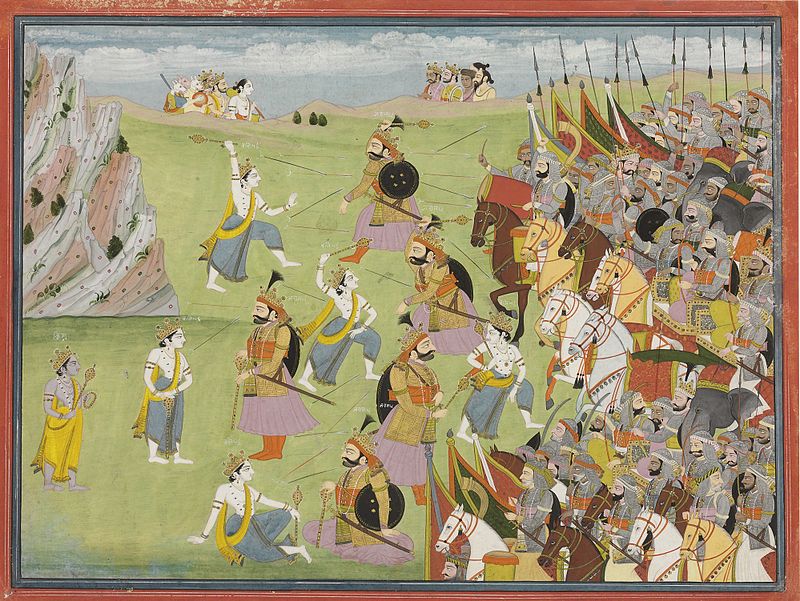 A painting from the Mahabharata, India, Kangra or Garhwal, c. 1810-20 (Wikimedia Commons)

On the death of King Pandu, the kingdom passes to Dhritarashtra, even though he is blind. His children and Pandu’s are brought up together in the court at Hastinapura. Rivalry develops between the sons of Pandu (the Pandavas) and the sons of Dhritarashtra (the Kauravas) and eventually Bhishma persuades Dhritarashtra to divide his inheritance between the two branches of the family. (If one wanted to find an analogy relevant to the Great War one could trace the progeny of Britain’s Queen Victoria through the royal houses of Europe.)

The Kauravas, under their new king Duryodhana, eldest son of Dhritarashtra, always intend to reclaim the half of the kingdom given to the Pandavas, ruled by Yudhishtira. The Pandavas establish their court at Indraprastha. As he is older than Duryodhana, Yudhishtira, the eldest of the Pandava brothers, is persuaded to celebrate Rajasuya, declaring that he is the chief among the kings. This exacerbates Duryodhana’s envy.

Sakuni, Duryodhana’s uncle, advises Duryodhana to win back the Pandavas’ part of the kingdom, not by war but by deceit. Duryodhana challenges Yudhishtira to a game of dice, knowing that Yudhishtira won’t refuse as that would be contrary to the dictates of dharma (ethics) which he follows to the letter. Duryodhana’s intention is that Sakuni will play for him, as Sakuni is a brilliant card-sharp.

Yudhishtira loses every throw of the dice game. (Gambling by leaders is an integral part of wars in every era.) He stakes his possessions, his people, his kingdom, his brothers, and eventually his wife, Draupadi, who is the wife of all five Pandava brothers. Dushassana, one of Duryodhana’s brothers, drags Draupadi into the assembly hall, where the game is being played, and humiliates her in front of everyone, while her husbands look on impotently. Only Krishna prevents her from being stripped naked, by making her sari endlessly long.

Having lost everything, the Pandavas are exiled for thirteen years. Duryodhana knows that, after this period, Yudhishtira will attempt to recover his kingdom; he gathers together allies and weapons. However, many people remain loyal to Yudhishtira, whose third brother, the great warrior Arjuna, succeeds in obtaining a very powerful weapon from the god Shiva. The remarkable weapons described in the epic resemble nothing as much as modern nuclear weapons. 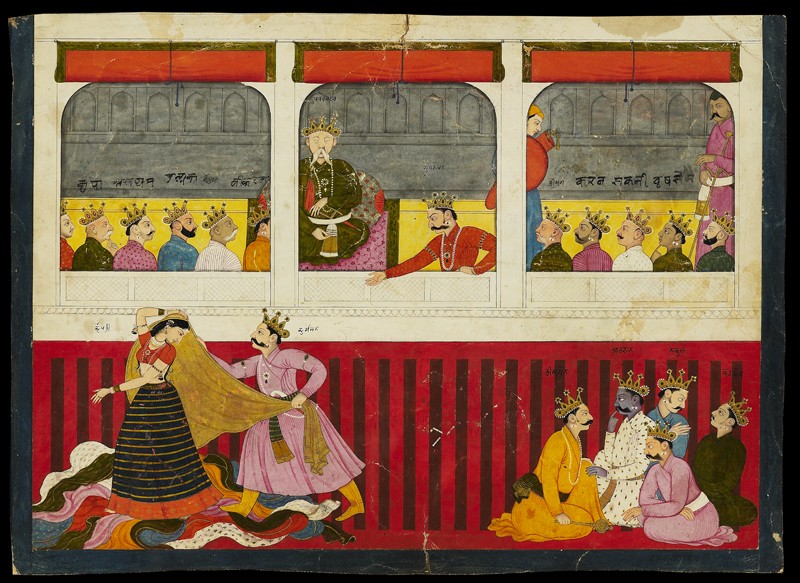 The disrobing of Draupadi, a miniature of the Basohli School, attributed to Nainsukh, India, c.1765 (Wikimedia Commons)

The two colossal armies are ranged against each other. Arjuna, the principal warrior on the side of the Pandavas, goes into the field between the armies, his chariot driven by Krishna. When he sees in the opposing army all his cousins, his grandfather, even his honoured guru, Drona, he loses the will to fight. Krishna then persuades him that to fight is his duty. This dialogue has become known as the Bhagavad Gita; a line from it came into the mind of the father of the atomic bomb, Robert Oppenheimer, when he saw the first explosion of the bomb: ‘Now I am become Death, the destroyer of worlds’.

The battle of Kurukshetra has a historical aspect, like the Trojan War, and took place north-west of what is now Delhi. It begins honourably, with both sides observing the rules of warfare, much like the Geneva Convention. As the war proceeds, these rules get bent and broken, interestingly in part by the agency of Krishna himself. Draupadi is finally revenged with the killing of Duryodhana and the disembowelling of Dushassana. The war ends with the brutal slaughter of women and children in the Pandava camp by the enraged son of Drona, who has been killed deceitfully.

Draupadi deals with a proud woman’s humiliation and her revenge. Unlike most Western operas, in which the heroine dies, this music-drama ends with the heroine ecstatically washing her hair in her enemy’s blood. While we need to be careful about making glib comparisons across historical eras, we should not overlook the role of women – or some women – in goading the men of both sides during the Great War to perform as warriors. Draupadi goads, but for a long time unsuccessfully, and her resentment intensefies until it becomes obsessive. There are Draupadis in all wars.

Karna pits two similar characters against each other, both outstanding warriors – Arjuna, egotistical, ambitious, who eventually makes the right choice, and Karna, unswervingly loyal, brave, who eventually makes the wrong choice. The right and the wrong are, however, not entirely congruent with Western value systems. Karna chooses loyalty to his friends above integration with his family, a choice which is validated in literature of the Western canon, for example, Mozart’s The Magic Flute, but which is at variance with the ancient Indian code of ethics.

Krishna attempts to probe some of the deeper questions surrounding peace and conflict. These questions apply to any war in any era. They are the questions that we in Australia are said to be not good at asking in relation to our wars. What is the origin of conflict? What is the point? How can it be avoided? How should we act? Krishna is prepared to countenance war only if absolutely every avenue for its avoidance has been pursued. Can we say the same? 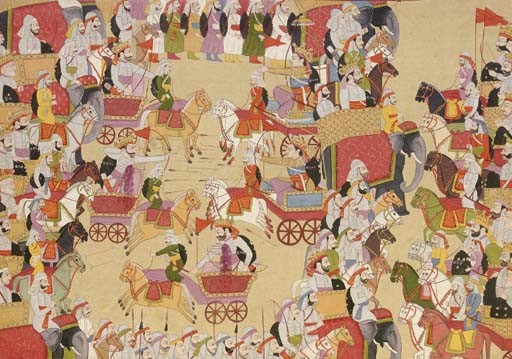 At one point Yudhishtira, paramount upholder of ethics, is asked, ‘What is the equal of defeat?’ to which he replies, ‘Victory’. It is a bleak answer but one which would strike a chord with many commanders in many wars, from Pyrrhus of Epirus onwards. In the aftermath of the battle, questions of right and wrong action, and their interplay with karma, or the laws of cause and effect, are addressed.

The destruction of possessions is both a concomitant of war and one of its lessons – that possessions are ephemeral. Refugees, possessionless, should perhaps be venerated. Australia scorns them now, perhaps because of its attachment to possessions, the fragility of which we are terrified of admitting.

Nicholas Routley has had a distinguished career in music in Australia and overseas as a conductor, pianist and composer. He now lives in the Northern Rivers district of NSW.