Stephens, David: Review note: Howard on Menzies rolls out on the ABC

So much is available about this two-part ABC doco that we won’t attempt more than some random thoughts which we’ll update after Part Two next weekend. Below there is a collection of links to reviews and other material.

There is always a problem with overclaiming in shows like this. We have had various wars that were claimed to ‘make Australia’; now it is a former prime minister telling us about another former prime minister who seems to have been responsible for – in the words of the doco’s sub-title – Building Modern Australia. 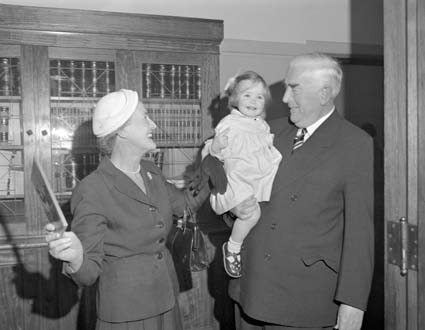 Or was he? One of the standard criticisms of Menzies II, 1949-66, is that he just sat there and Australia made itself around him. That didn’t seem to be the view of presenter Howard, however. He encouraged various interviewees from Geoffrey Blainey to Clive James, Bob Hawke to Rupert Murdoch, to say mostly nice things about Menzies.

The trouble was, though, that the desire to show how many distinguished people were willing to talk to Howard caused the program – or at least Part I of it – to degenerate into a series of short clips of Howard asking a question, the interviewee tossing off a quick response, then cut to the next distinguished talking head, perhaps with a background guffaw (actually more of a discreet ‘yuk, yuk’) from Howard. This reviewer would have liked to have seen a sustained bit of thrust and parry from, say, Howard and Judith Brett, who has written a couple of very good books about Menzies and his Liberals, here and here.

All that having been said, however, there was some wonderful footage, from the home movies of Menzies I, 1939-41, to Liberal and Labor advertisements from the 1949 election, to a rare clip of Chifley talking (his voice made Neville Wran post-throat operation sound almost dulcet), to family meals – not, of course, the Menzies family – in the early 1950s (wodges of mashed spuds whanged onto plates on a tiny kitchen table). The usual suspects were present – the Dancing Man in Sydney at the end of the war, immigrants, soldiers in Korea, communists, and royal tourists in 1954 with great crowd shots of worshipping, waving Orstralians. There was also some wry comparing of notes between Howard and Malcolm Turnbull on what they and Menzies learned from being rolled as party leader. Howard did not, however, extend the discussion of this issue to Bob Hawke, with whom he seemed to be on matey terms.

Menzies’ Forgotten People got a good run, perhaps more than they deserved, while the bastardry of the anti-bank nationalisation campaign was glossed over. The John Henry Austral and similar campaigns in 1949 put a hard edge on the Forgotten People philosophy and the program could have made more of the viciousness of that election, to which Menzies contributed in considerable measure. Bastardry in a cultured voice is still bastardry.

Those wishing to find out more can easily turn up newspaper cartoons of Chifley dressed in Gestapo uniform; the rancour of that period was probably second only in Australian history to the conscription battles of 1916-17, although the Lang era in New South Wales would have run it close also. Yet the history written by Tom Keneally, one of Howard’s talking heads, failed even to mention this struggle. How easily we airbrush our past.

The Australian home ownership dream was well brought out by comparisons between the numbers of people buying their own homes around 1950 and in the mid 1960s – a big increase – and between how relatively cheap homes were then compared with now. There are forgotten people today and they are mostly young and they subsist in a society which has far less belief in government action as a means of remedying ills than Australia had in early Menzies II . Some of these forgotten young people work in motor car factories and that iconic Australian industry’s passing got a mention in the show as a contrast to early Holdens whizzing along 1950s roads. 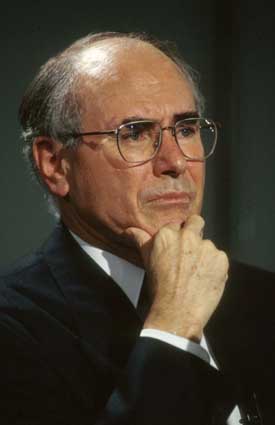 Then there was Monte Bello and Maralinga – Honest History has a review of Elizabeth Tynan’s book Atomic Thunder coming soon – and ANZUS, rather grandiosely described as a ‘mutual defence pact’. There was also the clanging 1954 voice-over as Elizabeth and Phillip arrived at Farm Cove, ‘the very spot where Australian history began’. Indigenous Australians were not front of mind in the 1950s and Howard’s vision reflected that.

We look forward to Part II. An early scene in Part I of the doco had Howard wandering through the corridors of Old Parliament House. This reviewer as a worker in that building in 1975 remembers seeing John Howard, newly arrived in the place, sauntering across Kings Hall. Even at that time, he had something of an air about him. Forty years and more later, he does elder statesman rather well, though he seems to have trouble looking square on at his interlocutor. The years take their toll in strange ways.

Monique Ross on ABC News has a lengthy introduction to the show. Neil McMahon on Fairfax has a review as does Graeme Blundell on Murdoch. The Australian is also mounting a collection of interviews done for the book. Howard’s book on which the doco builds is The Menzies Era: The Years that Shaped Modern Australia. Howard also curated an exhibition on Menzies 1939-41 at the Museum of Australian Democracy at Old Parliament House and it is still on. Gregory Melleuish writes in The Conversation. Then there is Tim Colebatch and Rod Tiffen in Inside Story (Tiffen reviewing the book, not the doco). Finally, though Part 2 will get to 1960 and beyond, we should mention Humphrey McQueen’s piece on the Menzies Time magazine cover and the Australia it hinted at.

More than Part 1, Part 2 showed the weakness of ‘once over lightly’ as an approach to documentary televasion – now there’s a Freudian slip – television. We got Petrov to Vietnam (and barely the latter) in an hour, which meant a quick dash at migration, a rapid surf through Suez, a cheer at the Olympics, some home movies of the Japan trade deal 1957, some glimpses of some well-dressed Colombo Plan students, an executive summary of the 1960-61 credit squeeze, a caricature of the Goulburn school boycott, and a quick summary of how we got into Vietnam.

Of course, all of these things happened in those 12 years but if you blinked you missed them in the doco. To hold it all together we were left with the mantra, repeated more than once by John Howard, of what a great contribution Bob Menzies made – and how this contribution has been underestimated. There were also a lot of shots of presenter Howard having selfies taken with young people. (Part 2, even more than Part 1, was about John Howard.)

Once over lightly always misses things or leaves questions unanswered. Like: why did Menzies think it was up to him to try to sort out Suez? what was journo Greg Sheridan’s evidence for saying that there were ALP members in the 1950s who were also members of the Communist Party? what came out of the Goulburn strike apart from a new toilet block? (answer: science laboratories all round, Catholic and state); what about Confrontation? what about conscription? what about Santamaria? what about the Royal? (failed name for decimal currency; see ‘dollar’); what about the Beatles? why does Rupert Murdoch now think his opposition to the Vietnam folly then was a mistake?

How’s this for an alternative? Don’t try to cover 12 years event by event but work around a few themes: the influence of the Split (and the weakness of Labor leadership and Labor generally) on Menzies’ longevity long past his best; the decline of Britishness in the face of migration and increased economic dependence on Asia; the growth of tertiary education; consumerism, comfortable lives and conformity; the contrast between attitudes to individuals and groups (Menzies’ friendship with his driver, Dharug-Kamilaroi man, Alf Stafford, compared with his indifference to Indigenous Australians generally; niceness to individual Colombo Plan students but resistance to changing White Australia). 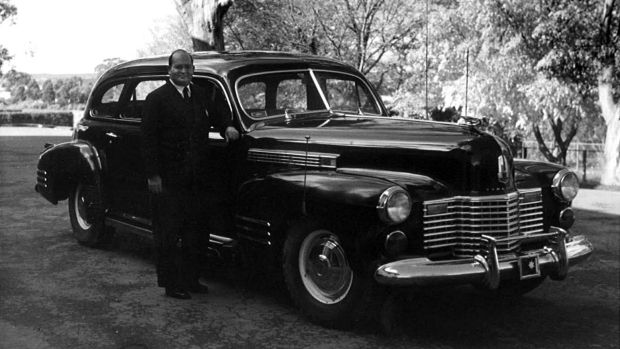 All of these themes – except perhaps the last one – popped up here and there but then we were whisked away by the schoolmarmish narrator’s tones to the next event or incident. But then we need to remember that John Howard was the prime minister who complained that the teaching of history was becoming ‘a fragmented stew of “themes” and “issues”’. Presenter Howard would have agreed with Harold Macmillan, ‘Events, dear boy, events’.