This quick look at Griffith Review 52 ‘Imagining the future’ is more of an alert than a review. It is difficult to keep up with the prolific output of Brisbane’s Griffith Review team. Is it really only three months since GR 51 ‘Fixing the system’ and barely a year since GR 48 ‘Enduring legacies’? (There is now, 1 June, an e-book associated with GR 52.) Both of those issues were highly nutritious reads with robust themes. 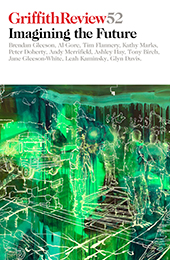 As with previous editions, GR 52 is distinguished by the number of authors (31) brought together between two covers, presumably to deadline, with a mixture of essays, reportage and fiction. There are also some attractive photographs (this time by Dan Broun and Rob Blakers on South-West Tasmania and Liam Young on cities).

There are some notable contributors, including Vice President Al Gore, Vice Chancellor Glyn Davis, Australians of the Year, Peter Doherty (also a Nobel Prize winner) and Tim Flannery, cartoonist emeritus Bruce Petty (writing poetry/prose – with a cartoon) and historian emeritus Graeme Davison. If one had a quibble it would be that there are a lot of middle-aged to elderly blokes in the volume – 22 out of 31 contributors are men. (There are two associated online offerings, which have two out of three female authors.) Clearly the old and bold have a view on doing things better next time but is not the future mostly a young person’s thing? And don’t women worry about the future enough to write about it?

Among the contributions that look particularly fetching are: Brendan Gleeson’s opening ruminations on Hannah Arendt (who always deserves another look), St Augustine, Terry Eagleton and others; Tony Birch’s fictional but hard-hitting imagining of the return of the judicially murdered Tunnerminnerwait and Maulboyheenner to modern Melbourne; Antony Funnell, who reminds us that the future is about people as well as about technology; Leah Kaminsky on genetics and medical breakthroughs; John Kinsella’s long poem about snow, Nazis and William Blake; Tony Davis on self-driving cars and Paul Daley on farming robots (there will be a lot of technology in the future); Graeme Davison on cities (technology or not, lots of us will still live in suburbs); Jane Gleeson-White on how the discipline of accounting has changed and what happens next; Kieran Finnane on Jung and Greek mythology in the vicinity of Alice Springs.

There is a clutch of articles on the environment and an overlapping clutch on cities. Peter Doherty concludes his piece with the simple link between managing human healthcare and managing the health of the planet and summarises the game plan for the latter in the well-known phrase, ‘think globally, act locally’. Difficult to put it better, really. Then, Graeme Davison’s limpid prose makes this former Melburnian homesick, even after 40 years.

I am an Australian and a city-dweller by birth, upbringing and choice. Belonging to country, belonging to the city; deep time and calendar time; the river valley and the square: they are different, but complementary, facets of an authentic contemporary Australian urbanism. Without the first, our lives are too shallow; without the second they lack purpose. Together they may just possibly enable us to belong here.

Andy Merrifield, independent scholar, is a shade more ‘out there’ about possible futures. He has found difficulty fitting in to various work niches but feels he is at the bleeding edge.

Perhaps it’s time for us to get politicised around non-work and undercut the professionalisation of work and life. In opting out, or contesting it from within, perhaps we can create a bit of havoc, refuse to work as we’re told, turn demotivation into a positive device, into a will to struggle for another kind of work, where use-values outbid exchange values, where amateurs prevail over professionals.

Some of the articles, including Merrifield’s, seem too long. We shall confirm or deny this on a closer read. There is a second quibble, too, about the volume’s title: given the breadth of possibilities discussed, surely it should be ‘Imagining the futures’, plural? This preference for multiple strands, even messiness, is a particular Honest History thing: we promote the idea of ‘not only Anzac but also lots of other strands of Australian history’ to apply to our past, as well as our present and possible futures.

We Australians do rather cling to some threads of our history, particularly the khaki one, which has in the last couple of years sometimes looked like expanding to clog the space available. (‘Peak Anzac’ seems to have passed though there are already Australian bureaucrats thinking about the 75th anniversary of the end of World War II. The 75th anniversary of Hiroshima and Nagasaki? Perhaps not so much.)

It is nice to see that the futures described in this volume lack martial tones. On the other hand, it is quite easy (though chilling) to envisage an attempted technological fix for threatened Chinese ascendancy in our region spilling over into our cities and suburbs. Such a future might impact upon the Australian Border Force, whose boss, Roman Quaedvlieg, is quoted in Julianne Schultz’s introduction to this volume. Mr Quaedvlieg spoke in 2015 about the mission of his organisation to protect our Australian ‘utopia’ but Schultz quotes Isaiah Berlin on utopias: ‘The main characteristic of most utopias is that they are static … nothing in them alters, for they have reached perfection’.

A messy, constantly changing, many-stranded, multi-hued future may not be utopia but it should be interesting. Which seems a good point at which to quote the forward-looking George Bernard Shaw: ‘Life is not meant to be easy, my child; but take courage: it can be delightful’. It is good to have journals like Griffith Review beating the drum in the market place for that sort of future and reminding us, in a time of increasing inequality, that the delight needs to be shared around. We need to ensure, as Julianne Schultz says, that ‘the future is a time and place in which innovation is not just a tool to increase efficiency and the wealth of the few in their personal utopias’.