Just some links in case you missed them.

Paul Daley in Guardian Australia reminds us of the reality of war, which sugar-coated remembrance often glosses over, and suggests the $500 million for making a bigger Australian War Memorial would be better spent in other ways.

Here’s an idea: how about allocating $370 million for a royal commission into veterans’ suicides from the $500m gifted, without question, to the war memorial expansion. That would really help the living.

Paul Daley also spoke recently at the Medical Association for Prevention of War (MAPW) dinner in Canberra. His topic was the militarisation of Australian history, something he has written about previously; use the Search engine on this Honest History site to find more of his work. He began by criticising the recent practice of the Prime Minister to augment the acknowledgement of country with an acknowledgement of military service.

Nobody is arguing that the critical work of defence personnel should be ignored by our political and cultural and opinion leaders. It never has been. But here Scott Morrison is affording a cultural and historical equivalence between defence force personnel and the Indigenous people of this continent who were invaded, dispossessed and murdered in their tens upon tens of thousands, denied citizenship and political franchise in their own land, and who now suffer the associated continued injustices, traumas and discriminations. The conflation diminishes the universally unique Indigenous spiritual and cultural antiquity in this land. And it does little but confuse the unique issues that relate to former and serving defence personnel.

Sue Wareham of Heritage Guardians and MAPW writes in Pearls and Irritations that the War Memorial’s expansion program juggernaut continues to roll on, smashing through or averting various accountability mechanisms. The main thing seems to be that someone in government promised the Memorial – or specifically its Council Chair, Kerry Stokes, and its outgoing Director, Brendan Nelson, $500 million to build a bigger space – and that’s going to happen, regardless. Our campaign diary continues.

Sue Wareham and colleagues mounted a small demonstration at the Memorial yesterday. Unlike last year, when someone tried to obscure the view of the demo by manoeuvring a bus in front of it, this year’s effort was seen from the Memorial. (Thanks to Australian Federal Police for thoughtful liaison.) 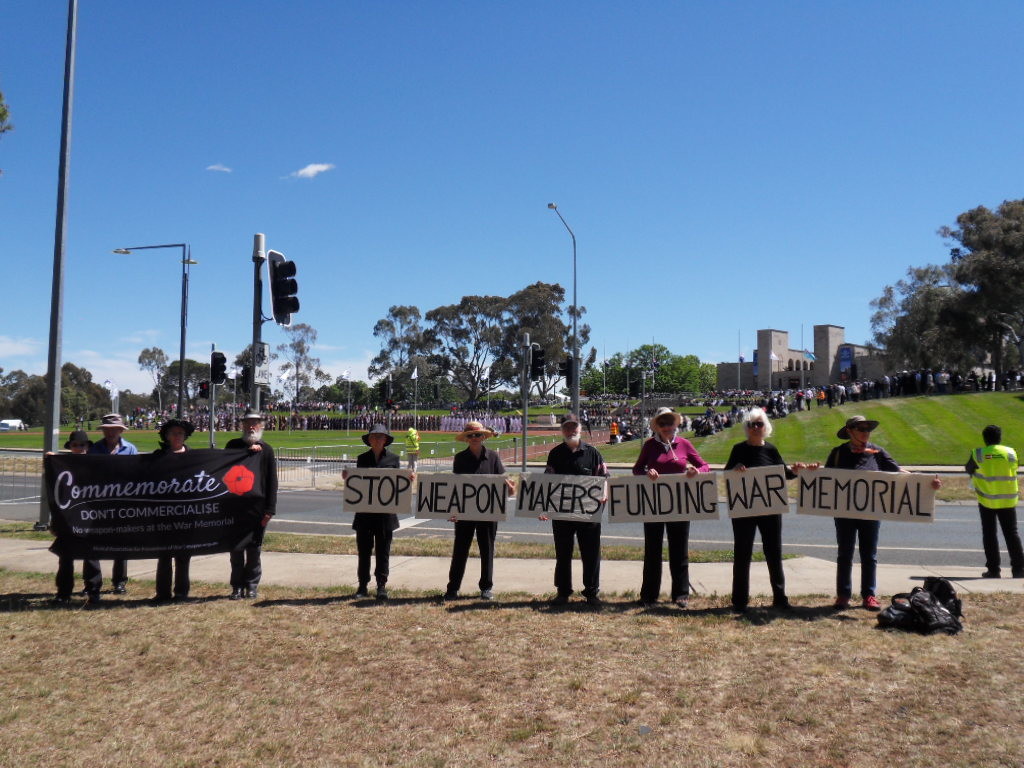 Bart Ziino of Deakin University, a distinguished historian of commemoration and memory, had a nice piece in The Conversation yesterday.

A century on from the national trauma of 1914-18, the politics of that event remain present. The kind of Australia we prefer to see depends on whether we regret or embrace the effects of the first world war on Australian politics and culture.

As we gather again on the anniversary of the end of the “war to end all wars”, we might observe that the conclusion of the war only started the long and continuing effort to come to terms with its meaning.

And, talking of the Memorial Council, Guardian Australia picked up the news that members of the Council and its chair have received pay increases of 57 per cent. This was a decision of the independent remuneration tribunal. The Council Chair, currently billionaire Kerry Stokes, goes from $52 680 to $82 680 a year, while members, including the recently appointed Tony Abbott, go from $26 340 to $41 340.

The Guardian story also notes the information from the Memorial’s Annual Report (previously reported on Honest History) that War Memorial Director, Brendan Nelson, gets an annual performance bonus of $60 000 on top of his salary of $375 000. This bonus appears to have been paid since Dr Nelson took up the position in 2012. We don’t know what ‘performance’ is involved; perhaps it is in the field of drumming up donations to the Memorial from arms manufacturers.

And finally, Polly Toynbee in The Guardian on how we need to move on from cloying remembrance.