Ministerial reshuffle leaves Anzac centenary minister out of a job

Prime Minister Turnbull’s new ministry does not include Senator Michael Ronaldson, formerly Miniser for Veterans’ Affairs and Minister assisting the Prime Minister for the Centenary of Anzac. The prime minister thanked Senator Ronaldson for his service.

Minister Ronaldson has been distinguished by, on the one hand, competent (as far as Honest History can judge) administration of the welfare side of his portfolio, and, on the other hand, an inability to enforce basic arithmetic in his portfolio, a blatant attempt to wedge the Opposition on a particularly egregious commemoration project, and a liking for bloodthirsty speeches, particularly where the future of our children and grandchildren is concerned.

It will be interesting to see how quickly and how fully the new minister meets the expectations of the commemoration constituency. As long ago as 1963, the then Minister for Repatriation was often called ‘the Minister for the RSL‘ and the close link continues, on the commemorative as well as the welfare side. 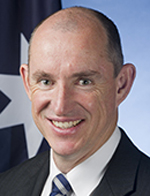 The designation of a Minister as ‘Minister assisting the Prime Minister for the Centenary of Anzac’ was a Labor innovation, continued by the Coalition. Minister Ronaldson held this extra title since he was first sworn in two years ago.

Honest History has been critical of Senator Ronaldson as minister. We wish him well. We congratulate Minister-designate Robert.