Leslie Jauncey became very close to King O’Malley, following their initial meeting in Melbourne in mid 1932 during Jauncey’s first visit to his homeland since 1920. Frequent correspondence between the two continued until O’Malley’s death in 1953. O’Malley, American expatriate, federal MP and minister, and the man holding the trowel in a famous picture of the laying of the foundation stone of Canberra in 1913, lived to a great age, keeping in touch with the slow growth of the national capital though, apparently, never visiting it after 1916.

Our indefatigable volunteer researcher, Jaunceyphile and fan of O’Malley, Steve Flora, has dug out from O’Malley’s papers a letter, written by O’Malley in 1937 to the then Commonwealth Librarian, Kenneth Binns. O’Malley is clearly upset at what has happened – or not happened – to Canberra since he wielded the trowel 24 years earlier.

We have transcribed parts of the letter and added Steve Flora’s comments. The rest of the letter includes speculation as to what happened to the trowel, as well as brief remarks about the establishment of the Commonwealth Bank and the treatment of Walter Burley Griffin. A couple of the photographs accompanying the letter are also included.

I walked over the ground [c. 1912-13] with the Board of Decision, Kirkpatrick, the Architect, Cowan, the Surveyor and  J.A. Smith, the engineer. We decided on Curragong [sic] Hill where the three columns were laid by the Governor General, Lord Denman, the Prime Minister, Mr. Fisher and myself on the 12th March 1913 …

If they had built Parliament House on the corner it would have been seen all over the Territory – it would have been a magnificent sight for people approaching Canberra … But instead of entrusting the construction to the late Percy Owens, Director General of Works in the Home Affairs Department in my time and one of the ablest men south of the Equator who put up the Post Offices in Melbourne and Sydney and many other important buildings, they handed it over to an Electrician in Tasmania [any ideas on who this was gratefully received. HH] as free from the knowledge of how to build a city as a frog is from feathers. The capital now is in a swamp, where some time it may be flooded by the Monlongo [sic] and the whole city is an atrocity …

The part where the columns are should be made “Commencement” Park and the monument there should be completed. It cannot do the Tourist business any harm if you point out that the man who called for the designs and secured 593,000 acres of land at from £3., to £4., per foot came from America and his name is King O’MALLEY. 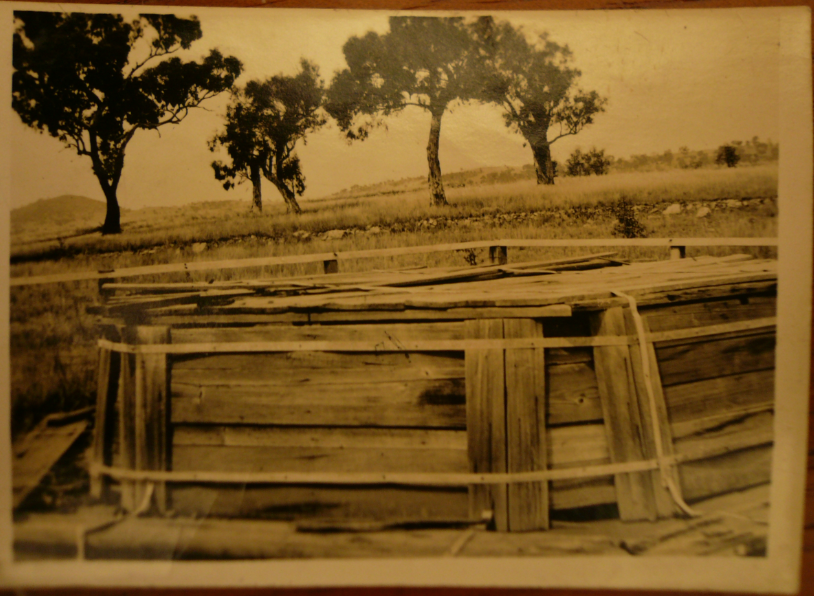 Close-up view of the Commencement ‘Column’ where the 1913 naming ceremony was held. Rotten branches lie across the planks protecting the structure, which stands in the same place today. Photo taken February, 1936. (Source: O’Malley Papers, National Library of Australia MS 460/10719)

So, it would seem that O’Malley thought that some conspiracy was afoot to ignore the founding of the Capital in 1913 and focus instead on the 1927 opening of the Commonwealth parliament building and the first sitting of the federal Parliament in Canberra. He continues to mention ‘columns’ throughout when referring to the foundation stones, but, though the original plan was to a construct a column (or plinth) atop the stones, that was never done. (The Australian Capital Territory Government, in Canberra centenary celebrations in 2013, built a column on City Hill, reflecting the original intentions related by O’Malley.)

The ‘Capitol’ building O’Malley refers to is the ‘Provisional Parliament Building’ or, as it is now known, ‘Old Parliament House’. The letter is also interesting because O’Malley confesses that he actually is ‘an American‘, something which he was apparently at pains to deny during his political career, always declaring that he had been born in Canada, to avoid possibly being disqualified from serving in the federal Parliament due to not having been born in part of the British Empire.

O’Malley apparently never visited Canberra again after he ended his tenure as Minister of Home Affairs in 1916 (due to the selling of ‘stagger juice’ being allowed after that date in the city). It seems that someone from the still under construction Australian War Memorial sent him photographs of the condition of the Foundation Stones. (Some of the photographs came to him in a Memorial envelope.)

Finally, the colourful expression about frogs and feathers was one O’Malley had used before:

The one refreshing interlude in a sleepy afternoon – Mr. King O’Malley up, like a sea breeze, after a drowsy day; hair tossing, arms waving, right foot on chair, right hand alternately pounding his left and thumping the table till you can almost see the mace jump.

“As destitute of truth as a frog is of feathers,” he roars …

“Is that wool?” interjects a member glancing at Mr. O’Malley’s wild mane, tossing like a mop head.

Regarding Canberra foundations stones and columns, there is a comprehensive collection of information and relevant documents transcribed here. 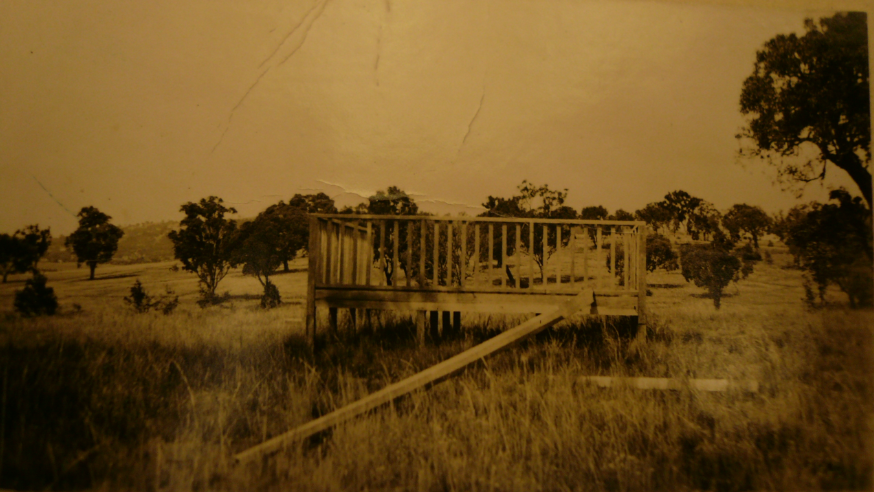 The site of the foundation stone laid by the Prince of Wales (later Edward VIII) in 1920. The stone was for Griffin’s proposed ‘Capitol’. The stone is not in the picture because it had been  removed. (It was later lost, then found again.) A flagpole leans against the railings. The site was almost midway between the Commencement ‘Column’ and the Provisional Parliament House. Photo taken in 1936.
(source: O’Malley Papers, National Library of Australia MS 460/10722)