Leslie Cyril Jauncey (1899-1959) was an Australian economist who wrote Australia’s Government Bank (1934), The Story of Conscription in Australia (1935) (discussed here in 2017 by Janine Rizzetti) and Modern Banking (1949). He was a man of radical views, inspired by ‘the spirit of Eureka’ and a visit to Russia. He lived for many years in the United States, took an MA and Ph. D. from Harvard and was head of the economics department at the University of New Mexico when Wall Street crashed. He was a close friend of King O’Malley. 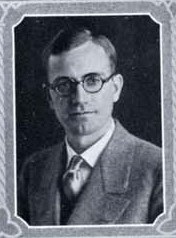 In 1934, Jauncey married the former Mrs Beatrice Fripp (1895-1996), a divorcee from New Zealand. He described his wife as ‘in no way economically depressed’, which was fortunate, given the circumstances of the time and Leslie’s own financial difficulties. 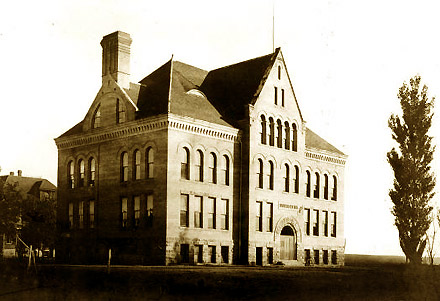 Hodgin Hall, University of New Mexico, Albuquerque, 1904 (source: Wikimedia Commons). Dating from 1892, it was the first building on the campus and still would have been the main building in 1929-30 when Jauncey taught at UNM. 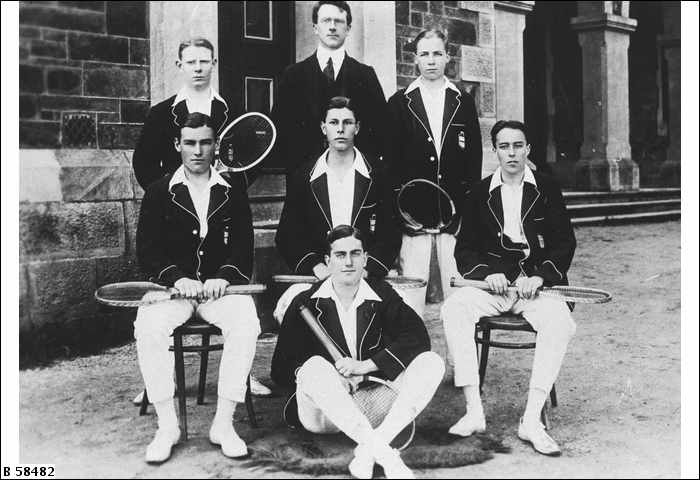 Tennis stayed with Leslie from school and may have been an entree into college fraternity and faculty life in the faraway United States. From Adelaide Leslie went on to tennis on foreign courts. ‘In the Union doubles contest the Class A finals were taken by C. R. Hamlen ’30, and Robeson Bailey ’29, playing against C. W. Wirth ’30, and L. C. Jauncey 2G. They won by the count of 6-2, 0-6, 6-4, 2-6, 6-3.’ (Harvard Crimson, 28 October 1927) And then, this note while he was at the University of New Mexico: ‘Tennis prospects are unusually bright this spring. Professor Jauncey has been placed in charge of the tennis squad. Jauncey has considerable knowledge of the sport, having played at Harvard and in Australia.’

Jauncey was also Treasurer of the Athletic Council this year. (University of New Mexico Yearbook, 1930) ‘Mr Leslie C Jauncey, of Adelaide, who has been conducting research work in economics at Harvard and a number of other American universities for the past 12 years, reached Sydney yesterday by the Sonoma. After visiting his family in Adelaide, he will proceed to China and Russia.’ (Sydney Morning Herald, 13 April 1932)

While his sporting prowess may have opened doors for him in US college society, Leslie retained an analytical eye. ‘“People never grow up in America,” said Dr. Leslie C. Jauncey, of Boston, Massachusetts, today…” Dr. Jauncey deplores the dislike which he says, Australians have for Americans, but says it may be more or less justified. “It is caused by three things,” he said. “American tourists who are not at all typical of the average American visit Australia and are often overbearing and objectionable, and they spend their money ostentatiously. Then there is the highly pushing type, the American salesman. American business methods, too, have not shown much consideration or knowledge of Australian markets.” Dr. Jauncey says the average American knows little about Australia.  He thinks it is like Arizona or New Mexico. Dr. Jauncey thinks Australia has a political democracy, while America has a social democracy.’ (News (Adelaide), 12 May 1932)

Here is Leslie visiting Adelaide around this time, firm of jaw and jaunty of hat-brim. Note these are all photographs you will not find in the Australian Dictionary of Biography or King’s Biographical Dictionary of Australian and New Zealand Economists. Honest History goes deeper! As we discover more and more about our blog namesakes, we are reminded that history and biography is always evidence-based. The emergence of the Jaunceys from the mists of time is a microcosm of the historical quest. Also fun.