When the Honest History enterprise was just getting under way one supporter pointed out how great it would be to have in one place – a repository, indeed – a resource of material that put the Anzac myth under the microscope. This gentleman said he had been publishing pieces almost annually along these lines but, even with search engines, they became difficult for readers to find.

Responding to this need, Honest History will have, under the heading ‘Anzac analysed’ when we launch the website on 7 November, links to dozens of articles which … analyse Anzac. Honest History is nowhere near the first to take this path. Critical remarks about the hyperinflation of Anzac are almost as old as Anzac Day itself. This comes from an editorial in the Labour newspaper, Australian Worker, in 1919:

Tomorrow – April 25 – is Anzac Day. A day of deep sorrow for many Australian homes… There is, sad to say, a disposition on the part of certain jingo folk in our midst to have Anzac Day set apart in the future as a day of national rejoicing; a day when speeches may be delivered applauding the occasion of Australia’s first real “baptism of fire”; a day when school children may be given a holiday, trotted out to salute the flag… I hope the time never comes when Anzac Day will be made a national holiday in Australia and the occasion for cheap-jack jingo speeches by ghoulish politicians and swaggering swashbucklers.

Anzac is an important part of our history, as are all of our other military exploits: all of them did things to Australia and Australians that we could have done without. The title of Joan Beaumont’s new book, Broken Nation, sums up what World War I did to us; we will have a review of that book soon. Marilyn Lake writes about Australia as a ‘fractured nation’ after the war. Both authors are interested in the strands of our history that war damaged. We need to get beyond Anzac if we want to even get close to understanding and appreciating ourselves. 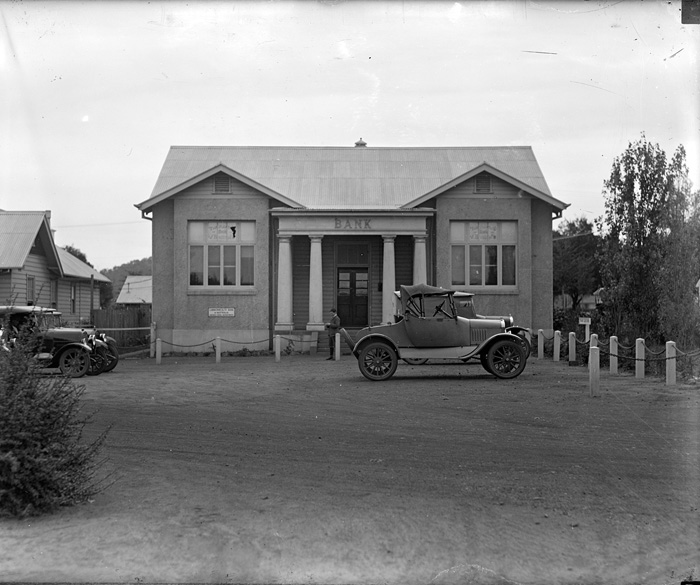 Commonwealth Bank at Acton, ACT, 1926 (source: National Archives of Australia A3560, 3122311; photo: WJ Mildenhall) The namesake for this blog, LC Jauncey, wrote a history of the Commonwealth Bank

In this spirit, there is more to Honest History than critical analysis of Anzac. Alert readers will have picked up the Honest History mantra, ‘Not only Anzac, but also [lots of other strands of Australian history]’. There is a lot more to the Honest History enterprise than doing forensic examinations of the ever-thickening khaki thread. The other side of the task is to bring together in one place (that word ‘repository’ again) an expanding collection of resources that cover the breadth of our Australian history. There will be more than 500 of these bibliographical items in place when the website launches and the plan is to grow that number after the launch from ‘crowd sourcing’ (the contributions of readers via the Forum section [now Comment facility – ed.] of the site). The small Honest History team does not claim a monopoly on expertise – far from it – and it will need help.

Already, the work to produce this database has shown that if Anzac is a ‘foundation myth’ it has plenty of competition. The research has uncovered claims that Australia has been shaped by, among other things, drought, fire, mining, the absence of water, the presence of lean resourceful rural blokes in the nineteenth century, camping (in tents) and … sex, sex in all sorts of permutations. The authors of these books have probably all grasped part of the truth. (And their publicists have pushed it a bit further.) The problem arises from their overclaiming, putting all the eggs in one basket.

The same thing has happened over the years with the Anzac myth. Simple myths are for simple people and Australia in 2013 should be beyond simple or unilinear myths. Explanations with one moving part are for shock-jocks and sound-bite politicians.

Rather than play a game of ‘duelling myths’ it would be a far better idea to stick to history. Virgin birth, intelligent design, Santa Claus and the Easter Bunny are enough myths to be going on with. We should put aside the Anzac myth and look, in its proper context, afresh at the history of Anzac, if for no other reason than that the men of Anzac deserve more than myth. They deserve properly evidenced, balanced, honest history about Anzac. That is in part why Honest History is coming. Love to hear what you think; use our Comment system to respond.