From the Honest History vault: Humphrey McQueen and others on the Spanish flu pandemic of 1919

2 July 2020 updated: A 1998 article by Anthea Hyslop (‘Insidious immigrant: Spanish influenza and border quarantine in Australia, 1919′, made available by kind permission of the Australian and New Zealand Society of the History of Medicine Inc) is very good on the arguments between states during the Spanish flu pandemic. Hyslop wrote:

[T]here is no denying the hostility that developed between Commonwealth and states, and also among the states themselves, once the disease was known to be at large. Dissension and recrimination pervaded their exchanges, as influenza spread through the community.

Hyslop also wrote ‘A question of identity: JHL Cumpston and Spanish Influenza, 1918-1919‘, first published in 1998 and reprinted here by kind permission of the author. Publishing details for both Hyslop articles are in the pdfs.

15 May 2020: Webinar on Pandemics and the Deep Human Past from new ANU Centre on Deep History.

11 May 2020: Historian Margaret MacMillan in Prospect magazine. ‘A particularly demanding task for leaders, especially in democracies, is to look further than the next election, and develop the capacity to imagine and prepare for unexpected crises of the future.’

11 May 2020: Sue Wareham of Medical Association for Prevention of War on the need to prioritise health spending over defence spending.

8 May 2020: Jeff Kildea in Pearls and Irritations has a detailed account (two parts) of how the 1919 pandemic took hold in Australia. Part Two.

2 May 2020: Mark Finnane in Inside Story on how policing of the Spanish flu pandemic fell more heavily on the working class.

28 April 2020: Frank Bongiorno talks to Damien Carrick on the ABC’s Law Report (second half of the program).

24 April 2020: Paul Daley in Guardian Australia on the differences between wars and pandemics, including how this difference emerged in the history of the Great War and its immediate aftermath. Includes link to PhD thesis by Patrick Hodgson on the pandemic in Queensland. Hodgson appeared on The Drum on 1 April (from mark 19.00).

Sue Wareham of Medical Association for Prevention of War on the implications of the coronavirus pandemic.

2 April 2020: Michael Bresalier in History and Policy on similarities and differences, compared with 1918-19.

‘Security’ has a different meaning nowadays.

Update 23 March 2020: Literature and a Workshop

Four literary works on epidemics and pandemics; a Workshop about keeping track of this pandemic.

Update 22 March 2020: The Conversation has Anne Twomey on the constitutional issues: section 92 is not a problem.

Update 22 March 2020: Frank Bongiorno in The Conversation on lessons from 1918-19: ‘The Spanish flu probably infected 2 million Australians in a population of about 5 million … [In Australia] Individual states did their own thing as the national agreement fell apart.’

Update 14 March 2020: Paul Daley in Guardian Australia: ‘A nation supposedly forged in the hellfire of war almost crumbled in the face of a virulent threat at home’. About 1918-19. See, for an example of press coverage: The Australasian, 12 April 1919.

No-one alive today remembers the Spanish Flu pandemic of 1918-19, which was a much bigger thing than Coronavirus/Covid-19. It is certainly worth us finding out more about what happened a century ago.

Eminent Australian historian, Humphrey McQueen, wrote about the Spanish flu in 1972 and kindly gave Honest History permission to post the material on our site. McQueen argued that the Australian response to the influenza pandemic revealed a lack of national administrative unity (despite the alleged development of a national character during the war) and did not enhance the reputation of the medical profession.

The McQueen post has some links to other material on the pandemic. Meanwhile, down in South Gippsland, blogger (Shire at War), Phil Cashen, researched the impact of the Spanish flu in his part of Victoria. He summed up:

The 1918-1919 Spanish Flu pandemic is estimated to have killed 50+ million worldwide. In Australia, estimates have about 40% of the population affected to some degree by the virus and between 12,000-15,000 deaths. 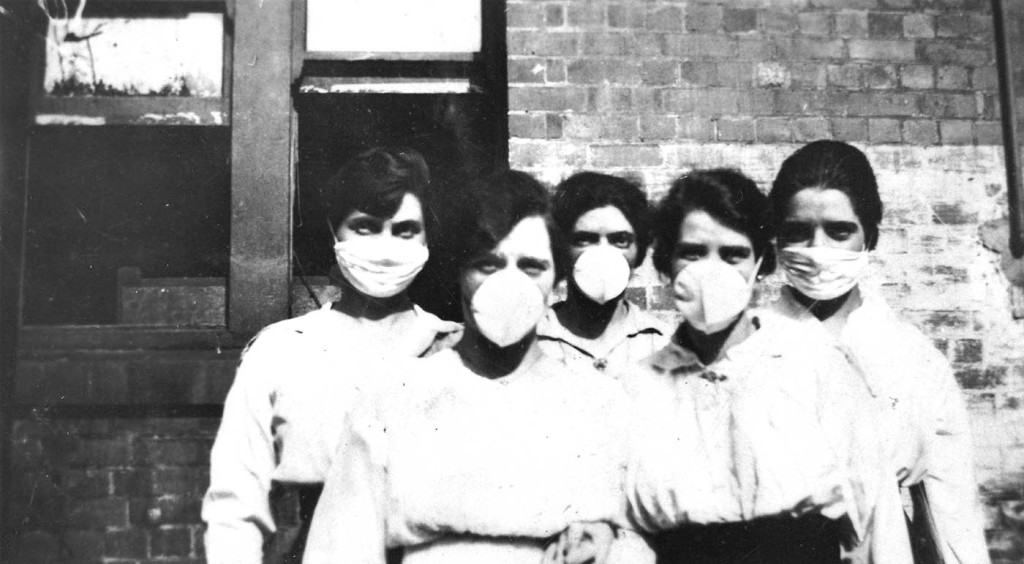 A fairly recent book on the pandemic is Laura Spinney’s Pale Rider: The Spanish Flu of 1918 and How It Changed the World. ‘Set against the devastating backdrop of global contagion’, said the review in Nature, ‘it is individual lives and deaths, discovered in letters, diaries, biographies and memoirs, that epitomize this rich account’. I thought it was good, also.

The National Library’s TROVE resource is indispensable on this subject, as on many others. A search for ‘influenza’ in Australian newspapers over the period 1 October 1918 to 30 September 1919 yields 191 000 entries.

Finally, there was a symposium in Sydney last year on the pandemic. The papers were published by the Royal Australian Historical Society on their Youtube channel. See also the comprehensive resource compiled by Peter Hobbins and RAHS. And there’s this from Michael Bartos in Inside Story on the general history of pandemics. Another book on the 1919 pandemic is John M. Barry, The Great Influenza: The Story of the Deadliest Pandemic in History. ABC Coronacast on lessons from 1918-19.

Print This
Click here for all items related to: Getting on with the world, Learning and improving, People like us