In 1906 a pioneering women’s network called the Ladies Harbour Lights Guild was founded at the Mission to Seafarers in Melbourne, in support of sailors who risked their lives at sea. The Guild comprised philanthropic Melbourne society women who raised funds for the Mission and volunteered their time.

The Melbourne Mission to Seafarers, which still operates today, was built on the Yarra River waterfront in 1917, thanks largely to the Guild’s fundraising efforts. The Mission and the Guild did much to support seafarers during the Great War and since.

Harbour Lights is an online documentary directed by Jary Nemo and written and produced by Lucinda Horrocks and Jary Nemo. Created with the support of the Victorian Government, the film is free to show, watch and share at windsky.com.au and missiontoseafarers.com.au. It can also be watched direct from YouTube.

The doco is timely in the lead up to International Women’s Day (8 March) and as part of Women’s History Month (March). Further information. 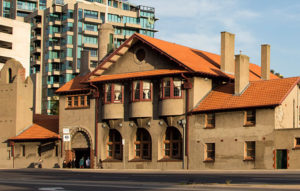 The Mission to Seafarers, Melbourne