From the Honest History vault: Anzac Treasures book from 2014 gives us some hints about the new, bigger Australian War Memorial 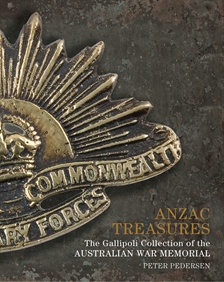 David Stephens reviewed the book for Honest History and said this:

The book is not easy to absorb. Most readers will dip in rather than plough through. After a couple of false starts, I worked through it from beginning to end, looking only at the pictures and their captions, then read it, chapter by chapter, in reverse. There are diary pages, letters, postcards, periscopes, paintings, medals, scraps of material, maps, models, flags, waterbottles, whistles, rifles, cannons, pistols, bullets, boats, binoculars, bells, barbed wire, bugles, bombs, tins of tobacco and bully beef tins, trenching tools, jangling things on wire, a stuffed horse’s head, a Furphy water tank on wheels, Monash’s stretcher (captured from a Turk), Brudenell White’s desk and pencil, all sorts of souvenirs, recruitment posters, and lots more.

Recently, in Wartime, the Memorial’s magazine, Memorial historian, Aaron Pegram, wrote about the efforts being made to grow the Memorial’s collection to help fill the new space that will eventually be made available by the Memorial’s $498m redevelopment. Dr Pegram said this (pages 41-42):

Curatorial teams are presently developing these exhibitions, sketching out major themes and storylines while carrying out an intensive assessment of items in the Memorial’s collection. They are set to showcase a broad range of objects, many of which have never been displayed because of limitations in the existing gallery space. These objects include aircraft and vehicles associated with poignant and engaging personal stories. Also on display will be artworks, photographs, film, uniforms, kit and equipment worn by Australians on operations, and smaller objects that reflect a more intimate perspective on the human experience of war.

So, the focus on objects, artefacts – even bric-a-brac – seems just as sharp in 2021 as it was in 1919 with Charles Bean and in later years with John Treloar and, eventually, Brendan Nelson, who shepherded Pedersen’s Anzac Treasures onto the shelves. We can imagine these items being used by Australian service people in various theatres. But we are entitled to ask now, as then, what will these objects tell us about the important questions: why did we fight in those places? what difference did our fighting make? how much did that fighting damage (and benefit) us – those who fought and their families – and how much did it damage and benefit the people on whose lands we fought?

There is, however, some hope of a broader – and more honest – perspective in a couple of sentences from Dr Pegram. ‘Other objects [being collected] reflect the poignant impact of service on families, and the post-service experience of veterans – both positive and negative.’ Regarding the deployment in Afghanistan, there will be some effort to show the work of Australian civilian agencies and the Australian Federal Police. ‘Beyond Afghanistan, the exhibitions will be a place where a poignant [that word again] and provocative question can be posed to visitors: despite 30 years of near continual ADF involvement in the Middle East region, have we left it a safer place?’

Those latter words at least are encouraging. We are told in glossy products like Anzac Treasures that artefacts and objects help to tell the stories of Australian service. But that just shifts the focus: will artefacts – and stories – help us come to grips with what really matters? Will future generations still be spun the stories of what Australians have done in war, while those generations are led away from asking and trying to answer those important ‘why?’ and ‘how much?’ questions?

Context matters. ‘After a century’, we said in 2014, ‘it is surely time to move on from Bean’s vision of the Memorial as “the finest monument ever raised to any army”‘. The 2014 review also included these words:

There is, all in all, an opportunity for an Australian War Memorial to develop which is different from the military reliquarium which emerges from the pages of Anzac Treasures [and which Pegram hints at in Wartime seven years later]. It may be the world’s leading such institution – as well as being an excellent research facility and, for the most part, a dignified locus of commemoration – but it could be so much more and, in doing so, could be so much more relevant to the Australia of the future.