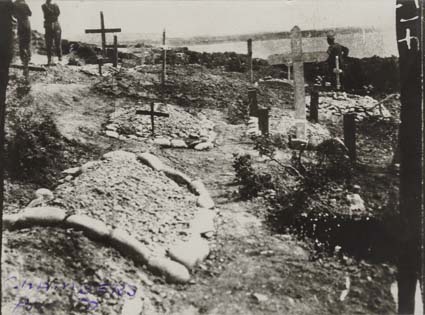 Professor Stanley answers these questions: How important is Gallipoli to Australians? Is the Gallipoli story just a national myth? Is Gallipoli’s importance based on tenuous history? Should our national mythology focus more on the victories of the Western Front?

Constitution Day: an old Queen and a new nation

Do we recognise sufficiently the achievement that was Federation? Michael Piggott and David Stephens examine one of our least known but best credentialled national days and consider how nations become independent. 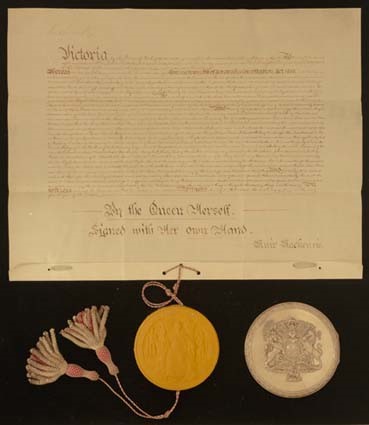 Introducing Honest History’s blog and the couple who gave it its name.

A watch on the centenary

The Honest History website will keep you in touch with events during the World War I centenary, some of them memorable, some of them possibly bizarre.

‘Gallipoli has an almost mystic place in our minds… In 1901 we managed to federate a country the size of London to Moscow. But it’s almost as if creating a nation peacefully wasn’t good enough for us. So we transferred this identity from Federation, which was quite a triumph, to the Dardanelles. But if Gallipoli was the birth of the nation, then it was an ectopic birth – because it happened in Turkey.’ (Thomas Keneally, historian and author, Panorama supplement, Canberra Times, 1 June 2013)

Not only Anzac but also lots of other strands

The headline above is becoming a motto for and shorthand version of Honest History’s approach to Australian history. In this e-newsletter and the next in September we provide a brief outline of how the Honest History website (www.honesthistory.net.au) will put that motto into practice.

Honest History will provide a continuously renewing resource illustrating the richness of Australian history. Under each of the headings below there will be items containing details of author, title and publishing for books, articles and other media. Some entries will include summaries or extracts. Some articles will be specially written for Honest History.

This section of the website will be called Resources. In this e-newsletter we will introduce the parts of this section entitled Strands of Australian history, Using and abusing history and Teaching history. In our next e-newsletter we will say more about some other parts of the Resources section (Anzac analysed, Australia’s war history, War literature). If you want to get an idea of the structure of the site you can mouse over the Resources widget at the top of this page although you won’t be able to access the content that we are in the process of loading.

We will be doing our best to make the resources on our website as wide-ranging as possible, within our objectives and our editorial policy. We will be relying on readers to tell us about items we have missed that should be included. Think of this as Honest History’s ‘no more gaps’ policy.

Material here will be categorised under seven headings. The categories overlap and some items are likely to appear in more than one place, though we are still working on some organisational issues.

The land we live in (with material on pre-history, distance, exploration, climate, environment, fires, floods and droughts)

Getting on with the world (international relations, foreign aid, the Asian century, defence, war). 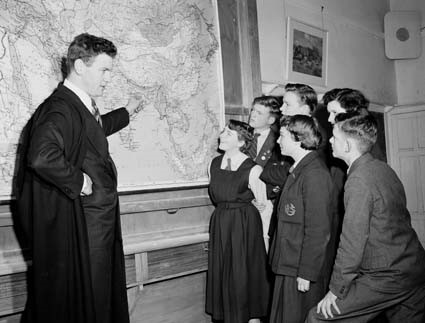 Learning and improving; getting on with the world. The original caption on this 1957 photograph reads: ‘Newspaper cuttings on present-day Asia have largely replaced textbooks on 19th century Europe in a history course at a Melbourne school. Mr Norman Currie is trying this new course as an experiment, the aim being to produce young Australians, who because of their knowledge of Asia’s history and current affairs are able to understand more clearly the present day problems of Australia’s neighbours. Mr Currie questions some of the students about places in Asia.’ (source: National Archives of Australia A1501, A887/4; photo: Neil Murray, Australian News and Information Bureau)

One of the main aims of Honest History is to show how history is often abused to suit current political purposes and, on the other hand, to suggest that history can legitimately be called into play to support political arguments. This section will present resources from Australian and international writers.

‘I find that the further I go back, the better things were, whether they happened or not.’ (Mark Twain, American humourist)

Honest History hopes to be helpful to teachers of history at secondary and tertiary levels. In particular, we believe history teachers play an important role in giving students the tools to work perceptively and critically with their own national story and to resist the abuse of history. This section will include useful material and refer teachers to other sources.

‘Education is simply the soul of a society as it passes from one generation to another.’ (GK Chesterton, English author)

The Australian War Memorial has a new exhibition, Afghanistan: The Australian story. Director Brendan Nelson has recognised the need to get the balance right between depicting past and current wars and this exhibition delivers on that commitment. The exhibition, online and face to face, enables an appreciation of the reality of this long-running war, the professionalism and compassion of Australians doing a difficult job, the impacts on families, both Afghani and Australian, and the effects on soldiers killed, wounded and psychologically damaged. 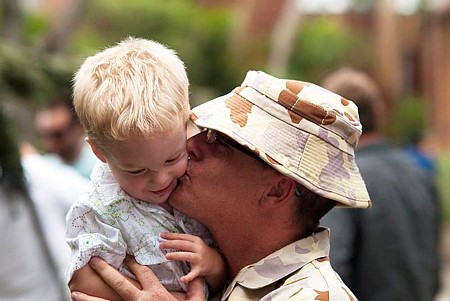 One Australian soldier interviewed says of Afghani villagers, who only pause briefly in their work in the fields as bullets fly around them, that ‘nobody should be that used to war’. Yet there are victims among both Afghanis and Australians. In Australia, soldiers and their families bear the brunt of the political chop logic that attends most decisions to go to war, as the interviews with soldiers’ families show.

One does not need to support the Australian commitment to this or other wars to be impressed by this exhibition. Nor does one need to accept the conflation by one featured officer of his ‘responsibility to the Australian Government’ with something he describes as a ‘responsibility to the Australian people’. Nor need one subscribe to the patriotic bombast (the term ‘Anzackery’ has been used) often called up to support our wars. Drawing a distinction between opposition to a war and concern for the men and women who obey orders to fight it – and do so with spirit and commitment – should not be difficult although the more extreme ‘Anzackers’ seem to find it so. 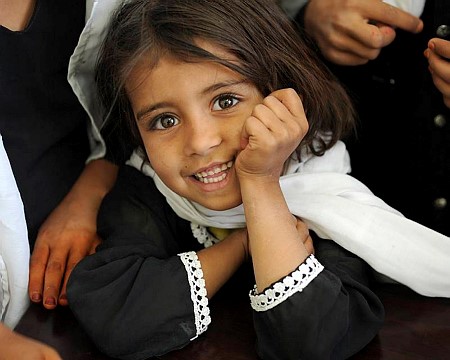 Opening speeches at the exhibition came from the Prime Minister, the Leader of the Opposition and the Chief of the Defence Force. The only jarring note was Mr Abbott’s paraphrase of Samuel Johnson’s remark that every man despises himself who has not been a soldier and that he (Mr Abbott) yearned to know more of the life of soldiers. This seemed to be support shading into sycophancy.

‘In those few minutes I witnessed the birth of a nation.’ These words were not said by an Australian or British observer at Gallipoli but by Brigadier-General AE Ross from Canada, recalling just after the war his feelings at the Battle of Vimy Ridge, 9 April 1917. Vimy Ridge holds a place in Canadian history similar to that of Anzac in Australian. According to the official Canadian website, ‘Many historians and writers consider the Canadian victory at Vimy a defining moment for Canada, when the country emerged from under the shadow of Britain and felt capable of greatness’. Sounds familiar.

There is no doubt that during the latter half of last century [that is, the nineteenth century] the Australian people were acutely aware of their isolation, and were determined to turn to account the freedom it gave them by building up something like an earthly paradise for the common man. Or perhaps for the uncommon man of the future! (2)

The Honest History website will contain resources under the heading ‘The land we live in’. They will explore, among other things, the influence of climate and the elements on our national life. ‘Droughts and flooding rains’ and fire.

Fire is a particularly powerful theme in Australian history. Paul Collins wrote in Burn: the epic story of bushfire in Australia, about how Australians have been shaped by fire. Keith Hancock and Bill Gammage have written about fire in aboriginal culture. Tom Griffiths has put fire in historical context. ‘Testimony from the 1939 and 2009 fires suggests’, says Griffiths, ‘that there is one thing that we never seem to learn from history. That is, that nature can overwhelm culture.’

Charles Bean felt that being good at fighting bushfires was one of the attributes of his idealised Anzacs. ‘It was a fact often observed’, Bean said, ‘that in a ship-wreck or bush-fire one man of British stock could compass the work of several Germans; and this capacity the Australian possessed in an extreme degree’. (3) In our time, firefighters and emergency services workers have been seen as modern day exemplars of ‘the Anzac spirit’ although one would have thought that the professionalism and courage needed in that dangerous line of work do not need to be bolstered by reference to a military tradition. Conversely, a tradition that may be appropriate in the services seems to sit rather oddly in this civilian sphere.

The broader relevance (or irrelevance) of the Anzac spirit today is also something that Honest History will be considering. Meanwhile, it is worth comparing the effects of fire and the effects of war. Ten times as many Australians died on Black Saturday 2009 in Victoria as died at Long Tan in 1966 and nearly six times as many as at Kapyong in 1951. The circumstances are different but the damage is no less real. The impacts on individuals and families are evident in both spheres. 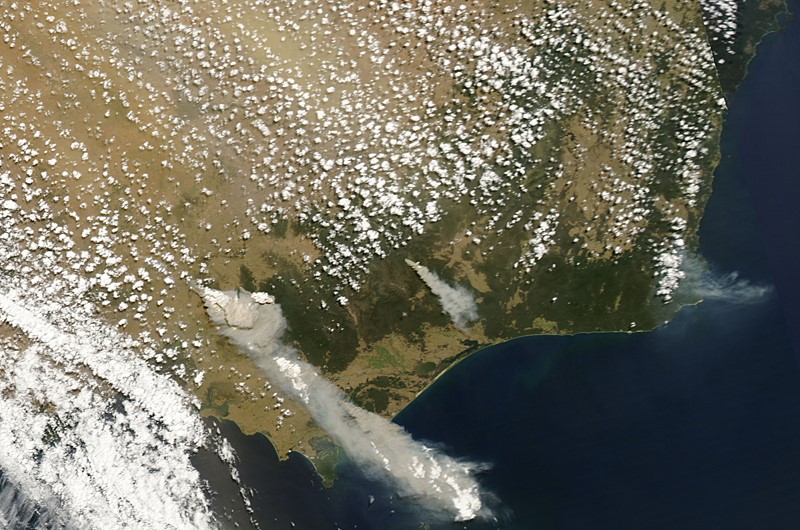 15 June 2015 is the 800th anniversary of the signing of the Magna Carta by King John of England. Many people regard this event as the foundation of the rule of law in Anglo-Saxon democracies. Honest History will be interested to see how much recognition this anniversary receives compared with the centenary of World War I. The beginnings of a debate in Britain may be found here.

(1) Whizzbang or whizbang: a small, high-speed shell whose sound as it flies through the air arrives almost at the same instant as its explosion; a firecracker with a similar effect. (dictionary.com)

If you want to do some voluntary research for us, write for us, give us comment or feedback, make a donation to us, get on our email list, ask us to speak at a conference or pen an item for your newsletter, then email us at admin@honesthistory.net.au and tell us and we’ll take it from there.

We are finalising a policy on these issues, to apply to the website. We will include it in our next e-newsletter.

Out in September and October with lots of interesting content.