David Stephens reviews five articles by Douglas Newton that take us ‘behind the scenes’ in the Great War. The piece also appears in John Menadue’s blog, Pearls and Irritations.

Douglas Newton’s book Hell-Bent: Australia’s Leap into the Great War showed us that, far from ‘the last man and the last shilling’, Australia in 1914 was falling over itself to provide the first tranches of both men and materiel. Newton’s work since Hell-Bent, such as his analysis of women peace activists in 1914, and his speeches to community groups, has confirmed his passion for confronting awkward questions about World War I – and, indeed, about any war.

Newton asks two important questions about that war a century ago: What did we fight for? What opportunities were lost for a negotiated peace? He looks at ‘the escalation of war aims by those to whom the lives of Australia’s men were entrusted, and the choices that were made to shun peace by negotiation and keep Australia’s men in the firing line’.

Newton’s articles summarise 26 lost peace negotiation opportunities between August 1914 and February 1918. In other words, there were 26 times when someone, somewhere made an effort to prevent the carnage or bring it to an end, ranging from President Wilson’s offer in August 1914 to take the Balkan dispute to international arbitration to an attempt to hold an international socialist peace conference in Stockholm in mid-1917.

All these attempts were derailed by one or other or all belligerents. There were no public contests around the negotiating table between German annexationism and British ‘bitter endism’ (and territorial ambition), no tests of for how long bargaining stances could be maintained before final positions were agreed.

On the Allied side, the proponents of inflicting a ‘knock-out blow’ on the Central Powers were always vocal and they were heavily represented in governments. ‘The war was kept going’, Newton says, ‘only by authoritarianism, propaganda and censorship’. There was a good deal of this in Australia – the National Library’s Keepsakes exhibition last year referred to ‘a wartime police state’ – though Australia’s role in the Allied councils of war was minimal.

As Newton says, ‘the war aims declared to the people, and the war aims for which wars are prolonged, are seldom the same thing’. One reason for resisting peace initiatives during the Great War was mostly left unstated: the potential for victory to deliver territory and wealth to the winners. Newton outlines 12 pacts, agreements and statements (four of them public and eight secret) between Britain, France, Russia and their smaller allies about carving up the German, Austro-Hungarian and Ottoman Empires and crippling the German economy in favour of other countries. These aims were concealed beneath high-flown rhetoric about fighting for freedom, defending the Empire, and liberating Belgium and other occupied territory.

Newton juxtaposes these machinations with what was happening in the war. As ANZAC troops trained in Egypt for the Dardanelles assault, for example, the British Cabinet considered a document headed ‘The Spoils’, which set out post-war territorial gains for Britain, Russia and Japan, with some sweeteners for Australia in the Pacific. Typically in such negotiations the Dominions, including Australia, were not consulted but could be relied upon to spruik the outcome, as Prime Minister Hughes did after the 1916 Paris Economic Conference, which was intended to cripple the German economy after the war (and thus helped bring about World War II).

In addressing the implications of our mass ignorance (or forgetfulness) of this history, Newton skewers some choice bits of rhetoric from then prime minister Abbott, who held the office at the height of official Anzackery, the over-the-top commemoration-celebration of 2014-15. He quotes Abbott at Lone Pine on Anzac Day 2015 that ‘duty, loyalty, honour and mates’ are ‘the virtues that outshine any cause’. When virtues outshine causes we are only a half-step away from the ‘my country right or wrong’ avowals, the proud ignorance of the reasons for fighting, and even the denials of the need to know them, that Henry Reynolds identified as typical of how New South Wales went to war in the Sudan in 1885 and the Australian colonies went to war in South Africa in 1899.

As Hugh White and others have said – we have said it often at Honest History – we Australians are great at praising how we fight but shy away from analysing why we fight. Newton rightly points out how the Anzac centenary ‘is milked as an opportunity to tell see-how-great-we-are stories, and to raise our national self-esteem’ while averting our gaze from the disasters of wartime state policy and the more profound lessons of war.

When we do turn our minds to the reasons for waging war we spout comforting clichés after the fact. ‘It was for country, empire, king, and the ideal that people and countries should be free’, said Prime Minister Abbott at Lone Pine. King George V told bereaved families on The King’s (or Dead Man’s) Penny commemorative medallion, that it was ‘for Freedom and Honour’ that their son or father had died. (No mention there of the Sykes-Picot Agreement or cutting the German Empire out of world trade.) Prime Minister Abbott also used to talk about ‘the universal decencies of mankind’ while Prime Minister Turnbull settles for ‘the values of democracy, freedom and the rule of law’. Even when we talk specifics, we still adjust our war aims as we go: ‘Weapons of Mass Destruction’ gives way to ‘regime change’; ‘destroying Al-Qaeda’ becomes schools for girls and building roads (in areas that are now reverting to Taliban control). 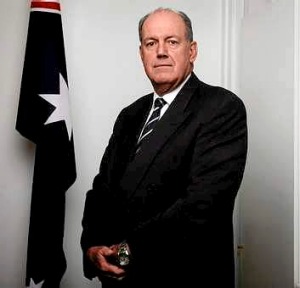 ‘Operationally, we’re starting to come down [in Afghanistan] so we’ve got to maintain some interest for the troops’ : then Defence Minister, Senator David Johnston, September 2013 (Fairfax/Alex Ellinghausen)

Beneath the rhetoric and the changes of emphasis, however, lie other aims which are often unstated. There is showing our mettle as a nation, making a downpayment on Alliance insurance policies (even though, as Newton says, ‘unqualified loyalty to big and powerful friends means being trapped in their misjudgements’), perhaps picking up a slice of territory or economic advantage, ‘maintain[ing] some interest for the troops’, giving the new weapons and kit a workout, chances for accelerated promotion, and so on.

There is also, always, beneath the determination to ‘stick it out to the bitter end’, a desire that the dead should not have ‘died in vain’, indeed, an aversion to even considering whether they have. This diffidence about matching war outcomes to war aims makes it more likely we will do it all again. Newton says ‘true respect’ demands that we look at why men and women died in war; it demands also that we try to prevent our children dying for the same causes. The more we kid ourselves about why we fight, the more likely it is that our kids will have to show how well they can fight.

John Menadue and Douglas Newton are both distinguished supporters of Honest History.