Davis, Glen: By-law 418: an episode in the anti-Vietnam War movement in Victoria

We are approaching the 50th anniversary (9 April 2019) of the successful campaign to defeat by-law 418. This campaign of civil disobedience is not well known or is forgotten. It is worth recounting this proud struggle from a tumultuous period of Australian political history.

The Melbourne City Council (MCC) by-law 418 was revived to limit anti-Vietnam War and anti-conscription activists from publicly stating their case on the streets of Melbourne. From late 1968, individuals and members of a number of groups opposed to conscription for overseas service and to the war had been handing out leaflets in front of the Melbourne Post Office, an action that led to increased conflict with the state.[1] 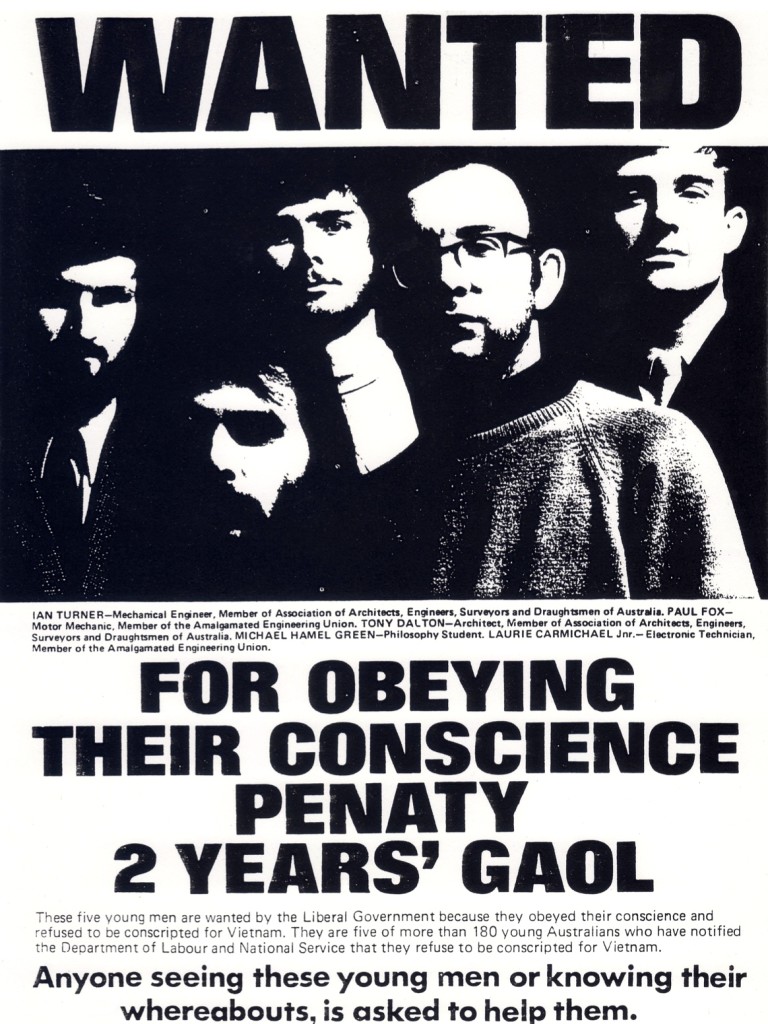 These actions breached a number of laws, in particular the Crimes Act, as well as the MCC by-law. The MCC decided to initiate prosecutions using the by-law, which had been on the statute books for nigh on a century and was designed to stop the distribution of leaflets not authorised by the Council. The by-law had long been dormant.

The revived by-law appears to have surfaced on 17 July 1968, when two members of Save Our Sons (SOS), Jean McLean and Jo Maclaine Cross, were charged as they handed out leaflets urging non-compliance with the National Service Act. This was during a protest outside Victoria Barracks aimed at blocking a new intake of recruits.[2]

Legal proceedings were begun against McLean, who was represented by Peter Redlich QC. Redlich argued McLean had a right of freedom of expression and opinion under Article 19 of the United Nations Convention on Human Rights. The case was eventually dismissed on a technicality, but gave a warning of things to come in terms of how the MCC would act.[3]

For some participants in demonstrations affected by by-law 418, the arrests of people handing out anti-Vietnam war and anti-conscription material drew links with political persecution in Vietnam. A ‘Don’t Register’ campaign was designed to coincide with the January-February conscription registration period.

The MCC’s use of the by-law provided a spur for a civil disobedience campaign around civil rights issues. Such was the support generated after the initial arrests that over 500 people gathered on the steps of the Melbourne Post Office on the first Saturday in 1969 to engage in civil disobedience by handing out ‘Don’t Register’ pamphlets.

A combination of by-law 418 and the Crimes Act saw over 100 arrests by early March 1969. To highlight the injustice, a prominent trade union official, Laurie Carmichael, brought along a tape recorder to tape police and council statements to protesters being arrested or warned. Carmichael made it clear there would be continuing trade union support for students in anti-Vietnam War and anti-conscription activities. Many of those arrested under the by-law chose to go jail to expose the unjust law and put further pressure on the council to repeal it. On weekends, people rallied outside the Post Office handing out pamphlets in defiance of the by-law.

Further demonstrations took place during March 1969. Students from Melbourne University, Monash University and the Royal Melbourne Institute of Technology organised a demonstration of over 1000 students and workers on 25 March, with assistance from the Rebel Unions.[4] Students for a Democratic Society members and supporters sought to have a delegation meet with the Acting Town Clerk, M. Herd, on 31 March; this failed to influence the MCC to repeal the by-law.[5]

SDS then, with the support of the Rebel Unions, sought to threaten the mayor’s commercial interests. The Chairperson of the MCC General Purposes Committee, which had the authority to repeal the bill, was Sir Maurice Nathan. He had initially made it clear he was not worried about who or how many were arrested, but he would not repeal the by-law.

Nathan was one of the Conservative Civic Group councillors who represented the interests of local big business, also being a director of Courage Brewery. The Rebel Unions took steps to put pressure on the MCC. This included banning transportation of Courage beer. Leaflets calling for a boycott of Courage products were circulated. Courage allegedly began suffering losses and some activists believed this led to the owners of the brewery contacting Nathan to seek a resolution to the problem.

On 9 April, an MCC General Purposes committee meeting saw the Council vote to repeal the bill. By-law 418 was now null and void.

Over the next few years those opposed to the undeclared war in Vietnam, and the conscription of young men to fight and die in Australian uniforms, continued their struggle. They encountered further obstacles, but by-law 418 was no longer one of them. As 2019 brings us to the fiftieth anniversary of this community campaign, let’s commemorate, but also learn from their campaign to break an unjust law.

* Glen Davis is a health professional with an interest in history, particularly the history of what’s made Australia a better place. This article is drawn from his Master’s thesis, ‘The relationship between the established and New Left groupings in the Anti-Vietnam War movement in Victoria 1966-1972’ (MA, Victoria University, 2001). For more on the by-law 418 story and related resistance see this article by Harry van Moorst. 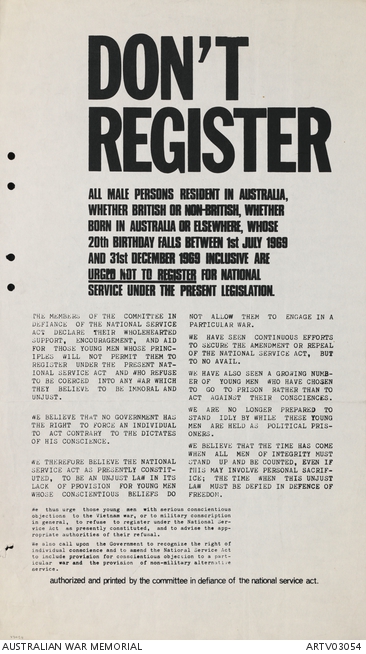 [1] Some of the groups involved were the Draft Resisters Movement (DRM), Students for a Democratic Society (SDS), and Save Our Sons (SOS).