Ataturk in the City of Hume, Victoria: Honest History Factsheet

Honest History’s research on the ‘Ataturk words’ of 1934 is here, summarised in a media release. Our work complements the article by Paul Daley in the Guardian Australia, which in turn took up a theme explored by the Turkish writer, Cengiz Ozakinci, in the periodical, Butun Dunya. Paul Daley’s article has since been translated into Turkish in at least two journals published in Turkey.

Reading that the City of Hume, Victoria (taking in Broadmeadows, Craigieburn, Sunbury, Tullamarine, and surrounding areas) was planning a monument or memorial to Kemal Ataturk, Honest History sent this email on 17 May to the Mayor of Hume, Councillor Adem Atmaca, and each of the other ten Hume councillors.

Honest History understands that your council plans to erect a statue or monument carrying the reputed words of Ataturk. Before proceeding, you should be aware of recent research in Turkey and Australia which throws serious doubt on whether Ataturk ever actually said or wrote the words attributed to him. This research is accessible at https://honesthistory.net.au/wp/wp-content/uploads/627-Ataturk-media-release.pdf . The material includes a detailed article by Walkley Award winning journalist, Paul Daley, of the Guardian Australia.

No-one denies the power of the words but this power is considerably diminished in the light of this research: almost certainly, the key sentence about Johnnies and Mehmets was an invention by an old Anzac in Brisbane in 1978; on the balance of probabilities, the other words were made up by Ataturk’s associate, Sukru Kaya, for personal and political reasons, 15 years after Ataturk’s death.

Honest History would welcome the opportunity to address a meeting of your council on this subject.

The mayor and each councillor was shown as receiving the email.

On 20 May there came this reply from the Chief Executive Officer of the Council, Domenic Isola: 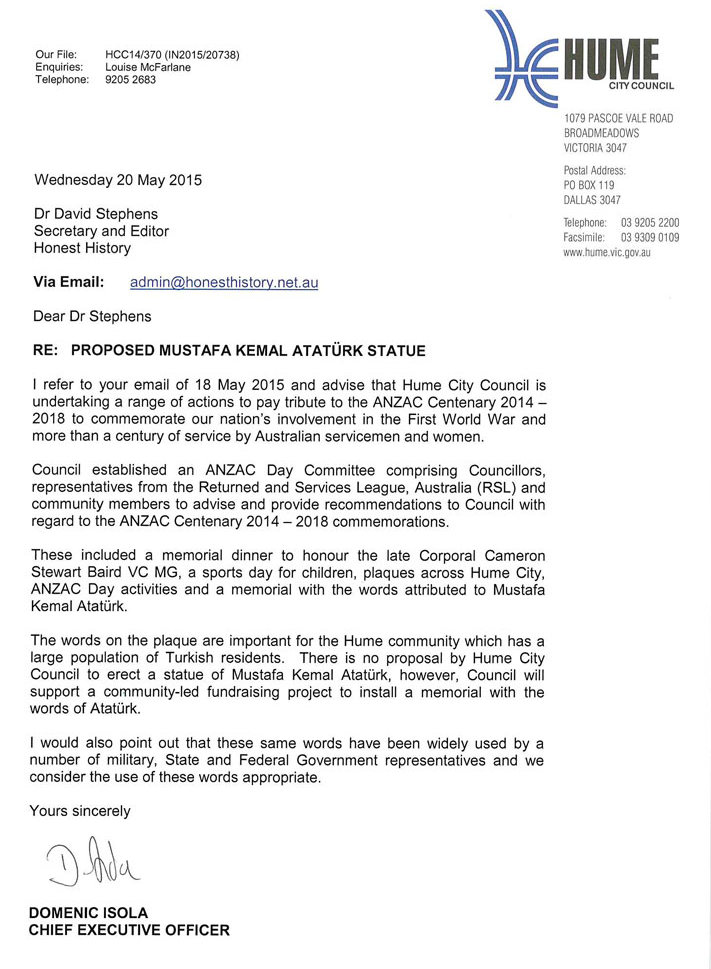 The key points in Mr Isola’s letter were his advice that, among planned commemorative activities in Hume, are ‘a memorial with the words attributed to Mustafa Kemal Ataturk’ and his concluding remark ‘that these same words have been widely used by a number of military, State and Federal Government representatives and we consider the use of these words appropriate’.

Honest History responded on 25 May:

Thank you for your prompt and considered response of 20 May 2015. Honest History notes the range of commemorative activities planned by your council.

It is good to see that you use the terminology “the words attributed to Mustafa Kemal Ataturk”. Certainly, on the basis of the research done by Honest History and others recently, it is difficult to put the provenance of the words any higher than that.

Our research is continuing and we will keep Council informed about it. Meanwhile, Hume would mark itself as a leader in commemoration if it resolved to unveil a plaque using the “attributed to” formulation.

Honest History recognises the importance of the words to Turkish-Australians; the words offer great comfort to all. However, we note the words of the Turkish scholar, Cengiz Ozakinci, in one of the articles reproduced on our website:

“While there are so many of Atatürk’s writings, speeches, and statements published during his lifetime that contain his sayings related to his views on world peace, is there any need to explain Atatürk’s pacifism and humanity by putting his signature under others’ poetic words, instead of just using his own words?”

While there is so much doubt about whether Ataturk ever said or wrote the words in question – and it is almost certain that he was not responsible for the crucial “Johnnies and Mehmets” sentence – it diminishes the act of commemoration to go on using the words unqualified, regardless of how many times they have been used previously by others. Persistence does not rectify errors but it certainly props up myths.

Mr Isola provided this further brief response on 25 May:

Thank you for your email of earlier today enclosing a reply to my letter of 20 May 2015.

Your comments are duly noted.

3 comments on “Ataturk in the City of Hume, Victoria: Honest History Factsheet”