‘High flying and capital crime between the wars: The Fabulous Flying Mrs Miller’, Honest History, 2 May 2017

This is the story of Jessie ‘Chubbie’ Miller, the daughter of a bank manager and wife of a journalist, who travelled from her home in Melbourne to London in 1927 and launched herself on a path to fame. The themes of the book are summed up in a sentence on its front cover: ‘An Australian’s true story of adventure, danger, romance and murder’.

Within months of her arrival in London, Chubbie met Captain William ‘Bill’ Lancaster, a veteran pilot of the Great War and RAF reservist. She persuaded him to take her as a passenger on his flight from London to Australia in his two seater biplane, the Red Rose. This was a single engine, open cockpit Avro Avian, made of wood and fabric. Although Chubbie had never flown before, Bill described her as ‘cool and capable with a fine air sense’. Leaving Croydon Airport in London on 14 October 1927, Chubbie and Bill flew 12 000 miles from London to Darwin, landing there on 19 March 1928.       .

Carol Baxter’s account of the voyage is dramatic and gripping. Before they touched down in France on the first leg of their flight, Chubbie was using the dual controls to fly the plane while Bill balanced his map and sorted out compass directions. Chubbie was much more than a mere passenger, joining Lancaster at the end of each day’s flying in the arduous task of repairing and maintaining the plane. Her main tasks were to clean the plugs and to filter the petrol to prevent water from entering the tanks, ‘a ghastly job’.

Flying was popular. Flying was glamorous. It was adventurous and dangerous and it captured the public’s imagination. In May 1927, more than 100 000 people had converged on London’s Croydon airport to greet the American Charles Lindbergh as he arrived in his monoplane The Spirit of St Louis after his epic Atlantic crossing from New York to Paris, described by Baxter as the flight that would launch the Golden Age of Aviation. She goes on, ‘In the words of a biographer, it was as if the man had walked upon water rather than flown over it’.

Arriving in Australia, the couple were treated as conquering heroes, feted by press and public alike, and travelled the country on a speaking tour for some months. Although they were each married to other people, romance had blossomed during their epic flight and they would remain inextricably linked for the rest of their lives.

In June they sailed for America, with the prospect of work in Hollywood. This didn’t eventuate. Bill found work as a test pilot while Chubbie spent time obtaining qualifications as a radio operator and getting her pilot’s licence. In May 1929, she was invited to participate in the first race for women aviators, the National Women’s Air Race, that became known as The Powder Puff Derby. There were 18 competitors, including Amelia Earhart and Ruth Elder. Modelled on men’s transcontinental air races, the race took place over nine days from 18 August, from Santa Monica in California to Cleveland, Ohio. It was a 28 000 mile marathon across difficult territory, requiring a high level of navigation and flying skills. There is, satisfyingly, a map of the air race’s route in the book, as well as one of the Red Rose flight to Australia.

The book also contains a number of photographs, particularly of Chubbie, and she’s young, vibrant, engaging. The frontispiece has an early picture showing her in flying rig, and is captioned, ‘the picture that Bill Lancaster treasured most’.

The relationship between Chubbie and Bill faltered at times, not helped by the vicissitudes of the Great Depression. By 1932 work was hard to find. Chubbie’s husband, Keith Miller, lodged divorce papers. Chubbie and Bill moved to Miami and rented a house together. In February, they acquired a housemate, Charles Haden Clarke, who was meant to help Chubbie write her autobiography. This ménage a trois ended in disaster some months later, with Bill Lancaster accused of Clarke’s murder.

The account of the murder trial – with Bill Lancaster ultimately found not guilty by a grand jury of murdering Clarke – is a highlight of the book. It reflects the detailed research undertaken by Carol Baxter, research that took her to libraries throughout Britain, Australia, India, South East Asia and the United States. 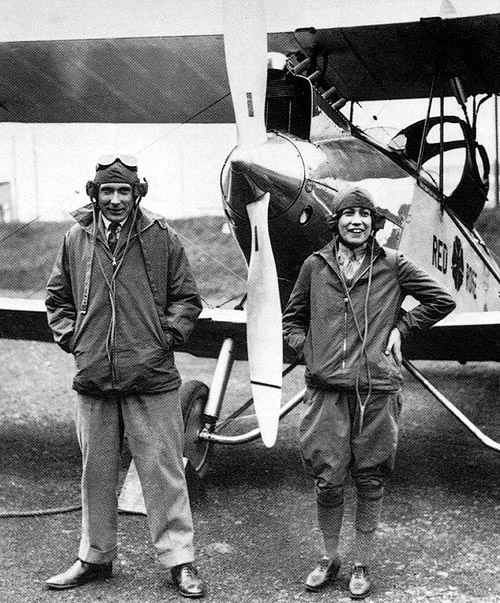 In an author’s note, Baxter tells us that, because of the plethora of information available to her, much of The Fabulous Flying Mrs Miller may strike the reader as historical fiction or fictionalised history. She says: ‘It is narrative non-fiction – that is, history told as story’. She goes on to say, ‘The dialogue in this book is taken from original records: newspaper accounts, court records and Chubbie’s interviews’. Unfortunately, these are not accessible to the reader through footnotes – there aren’t any. No chapter notes either. While the Bibliography lists details of some newspaper articles written by Chubbie, these are not available online. The author has dedicated the book to ‘Chubbie Miller’ for her consideration ‘in leaving so many personal accounts describing your activities, thoughts, feelings and conversations. A reader’s delight. A writer’s dream.’ These accounts, too, cannot be accessed by the reader.

In many ways, the book is an exciting read: this happened, then that happened, we are carried along by the narrative; it’s a real Girls Own Adventure. It reminds me of some of the children’s adventure stories of the 1950s, with their omniscient author, linear narrative, a story that deals with external circumstances only. It’s tell rather than show. Disappointing, really.

* Margaret Pender is a retired Commonwealth public servant who now does voluntary work at the National Library of Australia. She reviewed Ian Townsend’s Line of Fire for Honest History.