There is to be a big dinner at Parliament House tonight to mark the 75th anniversary of a broadcast delivered on radio station 2GB, 3AW and others by a former prime minister, but then humble backbencher, the Right Honourable Robert Gordon Menzies. The broadcast received some coverage at the time (Age, Canberra Times, Sydney Morning Herald) and wider dissemination in a booklet published in mid 1943, The Forgotten People (4/6d, postage 3d).

After the anti-Labor forces lost the 1943 election, Menzies came back as opposition leader, gained ground at the 1946 election and, with the help of popular weariness at wartime controls, policy misjudgements by the Chifley government, and some heavy duty – even unscrupulous – election campaigning, won the 1949 election comfortably.

The Forgotten People served as a philosophical statement. Ironically, given the strong support Menzies attracted among women, the cover of the booklet says he writes ‘in the spirit of man to man’. 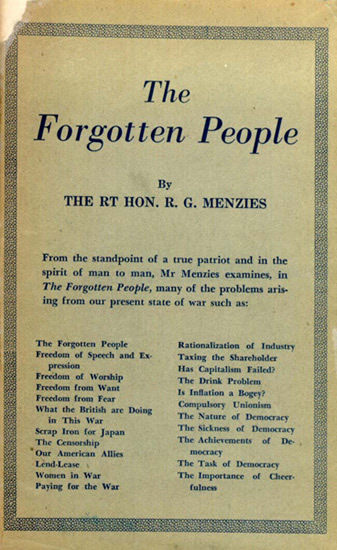 The occasion of the 75th anniversary of this booklet is a good time to collect some links to relevant resources. A range, but not necessarily comprehensive, includes Judith Brett’s book, Robert Menzies’ Forgotten People (republished 2007), which explores the links between Menzies and voters, and why his rhetoric hit home (reviewed by Julianne Schultz), Brett speaking on the ABC in 2007 (with transcript), a 2014 article by Don Arthur in the Australian Review of Public Affairs, Nick Cater, now at the Menzies Centre, writing in 2012 as a journalist, Tom Switzer on the ABC, and veteran commentator, JR Nethercote, in Fairfax.

Then there is David Furse-Roberts from the Menzies Centre, Andrew Bolt, extracting some Tony Abbott paragraphs from behind The Australian‘s paywall (the full Abbott article should be here), and an article in the Australian Financial Review by Paul Ritchie, a former Abbott adviser. More will be said tonight, no doubt, including a re-enactment of the speech, of which no recording survives.

The author of this note did an MA thesis on the Curtin and Chifley governments 1941-49 and first read The Forgotten People in the Mitchell Library in 1972.