‘Where are they putting the war crimes wing?’ Jon Kudelka cartoon in the Saturday Paper rolls up some important issues

Update 19 November 2020: David Stephens’ comment on Brereton report ties a few threads together.  Special Forces have been a thing at the Memorial for a while. It’s been all about not tearing down our heroes.

Update 14 November 2020: Director, Australian War Memorial, says the extended building will tell both good and bad sides of war stories and will look at causes and effects, too. PDF from our subscription. Statement was made in context of imminent war crimes report. If put into practice, it will contrast somewhat with the long practice of the Memorial, which has been more about how we fight rather than why we fight and whether it was worth it. We are checking the Hansard. HH

This cartoon by Jon Kudelka in today’s issue of the Saturday Paper (png from our subscription) rolls together a couple of important current issues: the $498m redevelopment of the Australian War Memorial; allegations of war crimes by Australian soldiers. 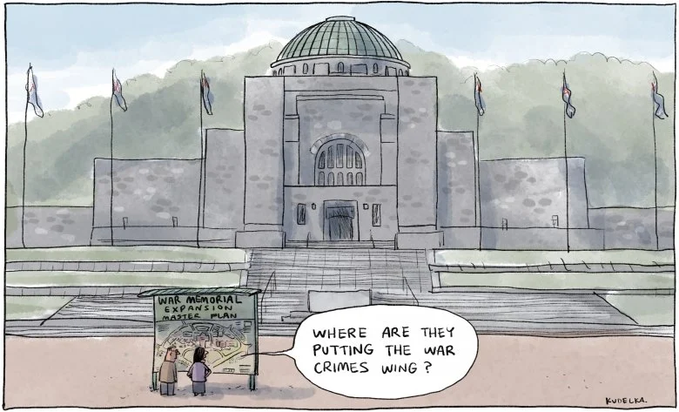 There was quite a conversation on Twitter this morning when we posted the cartoon. Below are a couple of our Tweets. Like many other Australians, we look forward to the imminent Brereton report on the alleged war crimes. Depending partly on what that report discloses, we may need to ask again the question contained in Kudelka’s toon: ‘Where [in the Memorial] are they putting the war crimes wing?’

#honesthistory This [cartoon] today from @jonkudelka in @SatPaper (from our subscription). Touches all sorts of issues, particularly the selectiveness of @AWMemorial in what it chooses to portray of our wars, avoiding the key questions and messy truths hidden beneath the Anzac cloak.

#honesthistory Disclaimer: HH not anti-@AWMemorial. I spent 2 years 2010-12 with others preventing building of World War I & II memorials in Anzac Parade to compete with @AWMemorial: See: https://honesthistory.net.au/wp/when-a-motley-crew-of-canberra-stirrers-protected-the-war-memorial-from-competition/… Can still promote @jonkudelka cartoon because of the truth it tells.