Readers of a certain age and erudition will be aware of the ‘rivers of blood’ speech by senior British Conservative, Enoch Powell, in 1968. Powell warned of the dangers of ‘coloured’ and ‘Negro’ immigration to Britain. He was dismissed from the Tory shadow cabinet after the speech but he expressed the views of many people in Britain nearly 50 years ago. There is a snippet from the speech on YouTube and background in a Wikipedia article.

Former Australian prime minister Abbott’s Margaret Thatcher speech (transcript including partial video) lacks the orotund rhetoric of Powell but it may become as notorious in its own way. The ‘catastrophic error’ speech may take its place alongside ‘rivers of blood’. Abbott argued that refugees crossing more than one border became economic migrants and should be treated accordingly, while Powell had looked further into a perceived future where native-born Britons became ‘strangers in their own country’ as immigrants shouldered them aside.

Powell seems to spell out the nature of the ‘error’ that Abbott hints at: producing a country where native-born compete unequally with immigrants. He repeats the remarks of a constituent: ‘In this country in 15 or 20 years’ time the black man will have the whip hand over the white man’.

The discrimination and the deprivation, the sense of alarm and of resentment, lies not with the immigrant population but with those among whom they have come and are still coming … The sense of being a persecuted minority which is growing among ordinary English people in the areas of the country which are affected is something that those without direct experience can hardly imagine. (Powell) 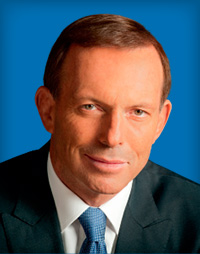 Our moral obligation is to receive people fleeing for their lives. It’s not to provide permanent residency to anyone and everyone who would rather live in a prosperous Western country than their own … It [keeping people out] will require some force; it will require massive logistics and expense; it will gnaw at our consciences – yet it is the only way to prevent a tide of humanity surging through Europe and quite possibly changing it forever. (Abbott)