This week in the Russian Revolution 1917: courtesy of the World Socialist Web Site – and Alexander Kerensky

You may ‘apprehend bias’ from the WSWS but, in this age of deeply flawed media, when the concept of ‘a newspaper (or website) of record’ is laughably out of date, we recommend you simply balance bias against bias. Perhaps the WSWS against any organ under the banner of News Limited, which Honest History distinguished supporter, John Menadue, described the other day as a ‘disgrace’ and a ‘rogue organisation’. And Menadue used to work for Murdoch.

The WSWS continues to provide useful information on what happened in Russia a century ago, in the midst of the largest modern revolution. (Recognition of these events seems to have been off the agenda of the mainstream Australia media, even the more respectable sectors of it. You would think there might have been a ‘Putin compared with Lenin’ – or perhaps ‘Putin compared with Czar Nicholas’ – angle there somewhere, at least. Perhaps something like that has been done and we missed it; please let us know.) 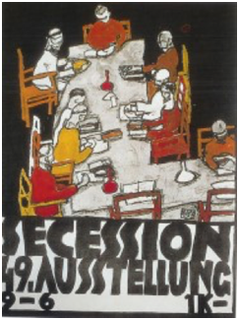 This week on the WSWS, we have ‘This week in the Russian Revolution: July 3-9’, in which Lenin warns against premature insurrection, Kerensky’s offensive begins to collapse (he was the moderate socialist prime minister, trying to keep the Russian end of the war going), the machine gun regiment of Petrograd (St Petersburg) plans an armed protest, there are internal clashes among Lenin’s Bolsheviks, there is a ‘potato revolt’ in Amsterdam, Teddy Roosevelt and trade unionist Sam Gompers contemplate taking a swing at each other in East St Louis, TE Lawrence and some men on camels capture Aqaba on the Red Sea from the Ottomans, 845 British sailors die in an explosion at Scapa Flow, and the artist Egon Schiele exhibits in Vienna. (Schiele died in 1918 of Spanish flu. He was just 28.)

As you can see, the WSWS today takes its internationalism seriously – as its predecessors did a century ago. We have not checked how many of these events featured in the Australian press of July 1918, but Trove tells us that, in the first half of July, Kerensky got about ten times as many mentions as Lenin. Even Kerensky was probably not widely known, but in Queensland, the Maryborough Chronicle, Wide Bay and Burnett Advertiser printed this unattributed encomium on 12 July:

Kerensky, the man whom they are hailing now as the greatest figure in Europe, is about 35 years of age. Compared with Hindenburg, Joffre or even Lloyd George he is a mere boy. And yet if you search the annals of all history, and if you ransack Europe from [the] Ural Mountains to the North Sea, you can’t find one man who could have done what this man has done – galvanised into life (or even partial life) an amorphous, divided, lethargic, dispirited, dissatisfied nation of 120,000,000 people in Europe alone!

PS 5 July: Heard the one about Lenin, the German agent? This old hypothesis has been revived by American academic, Sean McMeekin, in a book (and summarised in the New York Times) and rebutted by the Fourth International’s David North. It arose from the idea that Lenin’s trip in a (possibly sealed) train from Switzerland through German territory to Petrograd early in 1917 meant that he was a German agent with a brief to take Russia out of the war. You’ll need more than McMeekin and North’s work to come to a conclusion on this point and, even then, you probably won’t reach that state. We noted that some Australian newspapers in 1917 referred to ‘Herr Lenin’ – for example, the Hobart Mercury, 100 years ago today (Kerensky was referred to there as ‘M. Kerensky’) – but their grip on events in Russia at the time was fairly tenuous.

And to mark the Fourth of July, here is Senator John Fitzgerald Kennedy on 4 July 1957, sixty years ago, reading the Declaration of Independence.

Print This
Click here for all items related to: Australia's war history, Strands of Australian history, Using and abusing history